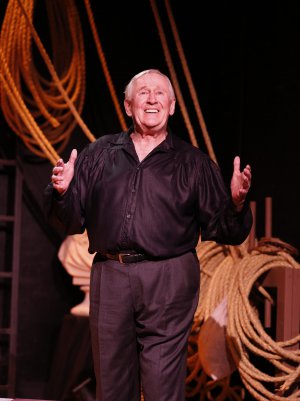 Len Cariou as he appears in “Broadway & the Bard” (Photo credit: Carol Rosegg)

Broadway & the Bard: An Evening of Shakespeare & Song suggests a revue of songs from musicals based on Shakespeare’s plays. However, what this show turns out to be is a review of the life and career of stage star Len Cariou whose distinguished career has alternated between Broadway musicals (A Little Night Music, Sweeney Todd) and Shakespeare roles elsewhere. Conceived by Cariou, director Barry Kleinbort and pianist Mark Janas who sits behind the grand piano, this is a charmingly diverting if light-weight evening of thematic pairings of monologues (and one sonnet) with songs from among Broadway’s masters.

At the top of the show Cariou tells us that he made his Broadway debut in the Stratford Connecticut Shakespeare Festival’s transfer of Henry V in 1969 and six months later in the spring of 1970 appeared at the Palace Theatre in the new musical Applause. Ever since then, he has had the idea to combine Shakespeare and song with “tunes that either support the text or are the antithesis.” The evening proceeds to pair Shakespeare and song thematically, like the opening sequence which offers Orsino’s “If music be the food of love, play on” from Twelfth Night, followed by Sondheim’s “Love, I Hear” from A Funny Thing Happened on the Way to the Forum and Rodgers and Hart’s “Falling in Love with Love,” from The Boys from Syracuse, based on Shakespeare’s The Comedy of Errors.

While Cariou, who started his classical training at Canada’s Stratford Shakespeare Festival and has also been associate artistic director of the Guthrie Theater in Minneapolis, brings a rich clarity to the Shakespeare roles he has chosen, some of the pairs diminish either the songs or the speeches. Some of the material has been chosen as having been part of his career, others as thematic counterparts. At age 76 not all of the songs sit well on Cariou’s voice while others are given excellent dramatic interpretations.

Most of the selections are from the comedies but the evening also includes Richard II (a role he understudied but never got to play) and the title role of King Lear which he played in Minneapolis and which he tells us changed his life. Among the themes investigated are power (Richard II’s “Let us sit upon the ground and tell sad stories of the death of kings” paired with “If I Ruled the World,” from the musical Pickwick); Petruchio’s strategy speech from The Taming of the Shrew with Lerner and Loewe’s “How to Handle a Woman,” from Camelot; and the difficulty of human relationships (Benedick’s rueful speech about his quarrel with Beatrice from Much Ado About Nothing with two Gershwin songs, “Nice Work If You Can Get It” and “How Long Has This Been Going On?,” as well as Bernstein and Sondheim’s “I Have A Love,” from West Side Story.) 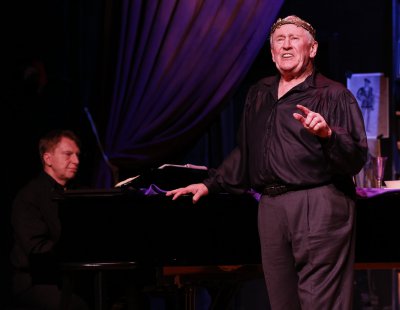 On the topic of growing old, Cariou does an excellent rendition of Jacques’ “Seven Ages of Man” speech from As You Like It, paired with a very poignant, “September Song,” from the Kurt Weill/Maxwell Anderson musical, Knickerbocker Holiday. However, not all the pairings are equally mellifluous. Marc Antony’s “Friends, Romans and countrymen” funeral oration from Julius Caesar is uncomfortably juxtaposed with a medley on forgetting: “Something Wonderful,” from Rodgers and Hammerstein’s The King and I, “Sometimes a Day Goes By” from Kander and Ebb’s Woman of the Year, and Strouse and Lerner’s “There’s Always One You Can’t Forget.” However, it is a pleasure to hear Cariou recreate this last listed song as it comes from Dance a Little Closer which closed on opening night so that it is unlikely that anyone in the audience has heard him sing it before.

Following a powerful rendition of King Lear’s “O, reason not the need” speech, he pairs it with a delightful declamation of 70-year-old Fagin’s “I’m Reviewing the Situation,” from Lionel Bart’s Oliver. Some of the unfamiliar selections are real finds like Sondheim’s setting of Shakespeare’s “Fear no more the heat o’ the sun” from Cymbeline, interpolated into the musical The Frogs. As Cariou tells us, “The words are Will’s.  The music is unmistakably Steve’s.” Although Cariou’s voice is not what it once was and his top notes are diminished, the best moment of the evening is his “Brush Up your Shakespeare” from Cole Porter’s Kiss Me, Kate, the musical version of The Taming of the Shrew, with a little help from Janas at the piano.

While Len Cariou seems to have missed his opportunity for a deep analysis of the Shakespeare that he has included, his aim seems to have been to give a memoir in story and song. Under the direction of Barry Kleinbort, his breezy, nonchalant manner is quite infectious and he makes the 80 minutes pass as in a moment. He fittingly ends his Shakespeare monologues with Prospero’s “Our revels now have ended,” a play in which he has appeared three times in different roles. Hopefully, we will still see Cariou in many more roles yet to come.