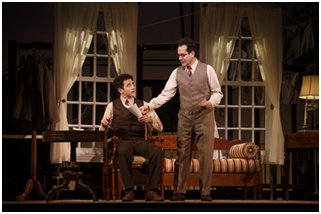 Santino Fontana as Moss Hart and Tony Shalhoub as George S. Kaufman in a scene from Act One (Photo credit: Joan Marcus)

Act One, Moss Hart’s beloved memoir of his rise from poverty to his first success as a Broadway playwright has reached Lincoln Center’s Vivian Beaumont Theater in an adaptation by Pulitzer Prize and Tony Award winning playwright/director James Lapine. While probably the most acclaimed American theater memoir, Act One, which was published in 1959, two years before the author’s untimely death at 57, and made into a movie in 1963, has never before been seen on the New York stage. This entertaining story works on three levels: the tale of Hart’s journey from poverty to success, his collaboration with older master-playwright George S. Kaufman on his first hit play, and a primer on how to write – or not write – a play, particularly a satiric comedy.

This engrossing but leisurely retelling of Hart’s life as a poor boy in the Bronx, starting in 1914 and continuing up to the opening night of Once in a Lifetime at Broadway’s Music Box Theatre in 1930, is totally faithful to the book. It includes all of the major events and anecdotes – with a little pruning of his account of his time as a social director in the Catskills. The large cast of 22 perform 34 speaking roles includes juicy and memorable performances by Tony Shalhoub, Andrea Martin and Will LeBow in multiple roles. At two hours and 45 minutes, the play is a bit long but the wonderful performances, the colorful stage pictures, and the wise and witty writing (much of it directly from Hart’s recollections) make the journey worth the investment.

Beowulf Boritt’s remarkable three-tiered setting on a revolving stage makes it possible to portray all of the places and events of Hart’s early life with hardly any time lost for set changes, from the Bronx tenement apartment, to a Catskills hotel, to a Rochester theater, to Kaufman’s townhouse on the upper East Side and the Philadelphia and Brighton Beach, Brooklyn, tryouts of Once in aLifetime. The play makes use of three actors to play Moss Hart: Moss as a deprived school-aged child, ages 10-13 (Matthew Schechter); Moss as an ambitious and eager young man, ages 16-24 (Santino Fontana); and Hart, aged 55, (Shalhoub) as the famous and successful author at the age when he wrote his memoir. In addition, both Shalhoub and Fontana alternately narrate various parts of the story, directly addressing the audience, which allows for the inclusion of much of Hart’s own voice from the autobiography. 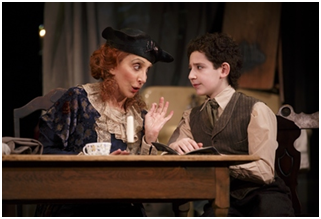 Andrea Martin as Aunt Kate and Matthew Schechter as Mossy in a scene from Act One Photo credit: Joan Marcus)

We meet the young Mossy as a child in the Bronx living in a two bedroom tenement with his battling English parents Lillie and Barney who must take in boarders to make ends meet, his younger brother Bernie, and his eccentric Aunt Kate who is addicted to the theater and serves as his introduction to it. Having to leave school at the end of eighth grade to go to work in a hated fur warehouse, he tells us that “The only thing that poverty was ever good for was the drive it gave me to leave it behind,” a mantra that seems to have followed Moss the rest of his life. Quitting this job at the end of the summer, Moss finds more stimulating work in the office of theatrical impresario Augustus Pitou, “The King of the One Night Stands,” who books second-class touring shows. Eventually becoming script reader for Pitou, Moss concludes that he could write a better play than those he is reading. After writing one quickly based on the models he has been subjected to, he puts a made-up name on the script which electrifies Pitou. The resulting production proves a quick failure but makes Moss even more determined to win success as a playwright and gain entrance to the professional theater.

Just at this moment, he meets future playwright and director-to-be Eddie Chodorov who gives Moss a chance to direct community theater in Newark and later assist him as social director in the Catskills. It is his seventh script, Once in a Lifetime, which gets him an introduction to both Broadway producers Jed Harris (in a hilariously embarrassing encounter) and kindly and affable Sam Harris (no relation) and eventually to the study of fabulously successful playwright/director and future mentor Kaufman. The older man agrees to collaborate on a rewrite with its novice author and direct the play for a Broadway production after the out-of-town tryouts. The second half of Act One follows the comic and frustrating ups and downs of trying to get this satiric three-act comedy to work despite all of the third act’s efforts to defeat them. The play ends with Hart’s first taste of success – and the rest as they say is history.

Sticking as closely as he does to the content of the memoir, Lapine may have made a mistake in revealing almost nothing about the plot of Once in a Lifetime (just as Hart did) as it is probably unknown to a contemporary audience, unlike some of Kaufman and Hart’s more familiar collaborations like the oft-revived The Man Who Came to Dinner. Witnessing so much of the struggle to get it right, audiences might like to know that it is a satire of Hollywood in the turmoil caused by the advent of sound. Nevertheless, the doubling and tripling is always clear and as the actors are always costumed in character so that it is not a problem keeping the many characters straight. The play could probably use a little cutting but the question is which memorable anecdote from the book one would sacrifice. As of now, it has enough incidents to have made a four-part mini-series. Working as his own director, Lapine has obtained many remarkably nuanced performances from his cast as both unknown people and legendary celebrities. 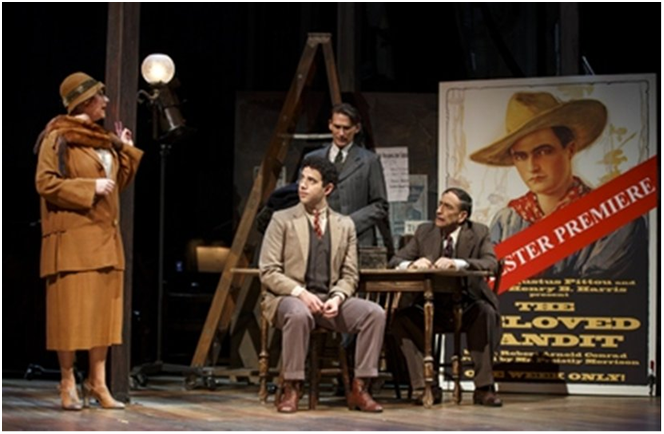 Amy Warren, Santino Fontana, Bob Stillman and Will LeBow in a scene from Act One (Photo credit: Joan Marcus)

Shalhoub has the juiciest part playing the middle-aged Moss Hart, his choleric cockney English father Barnett and the famously eccentric Kaufman. As the celebrated playwright best known for his comedies, with his signature round glasses and his unruly mane of hair, Shalhoub looks a great deal like the man himself. He has also acquired all of the peculiarities that Hart described in his recollections: an obsessive compulsive who did not like to shake hands, but who raised one finger in greeting, his nervous tic of wrapping his right arm round his neck to scratch his left ear, his throwing himself full length on the floor to think, and his habit of picking up lint from rugs and sharpening pencils before he can focus his mind on work. But he also makes Kaufman razor sharp both as a conversationalist and as a play doctor. By comparison, Fontana is a bit bland as the young Moss Hart (a problem also in the book) though he gains in forcefulness in the second act when he loses his fear of Kaufman and when he sees his chance at Broadway slipping away.

Comedienne Andrea Martin plays three unique women and each one is a deft, unforgettable portrait: Moss’s eccentric Aunt Kate, always too theatrical and patronizing for any situation; agent Frieda Fishbein, a woman in a man’s game who can hold her own with the best of them, and Kaufman’s chic and elegant wife Beatrice who treats Moss as an equal though he is as yet an outsider in her world. LeBow has some memorable scenes as the sour Augustus Pitou and again as the equally unconventional Jed Harris. Tony winner Chuck Cooper is fine as an alcoholic Charles Gilpin, past his prime as ONeill’s Emperor Jones, and as Sam Harris’ genial general stage manager Max Siegel. Bill Army, Steven Kaplan and Will Brill make Hart’s equally ambitious young thespian friends dubbed the “Confederation of the Office Boys” each as different as they can be. Bob Stillman has some notable moments as director Priestly Morrison and later producer Sam Harris, as well as one of the three on-stage pianists.

The production team has had the enormous job of bringing to life 16 tumultuous years as well as handling 34 characters, plus an ensemble of six. The brilliant recreation of the many 1920’s costumes required is the work of Jane Greenwood, veteran of over 120 New York productions. Ken Billington is responsible for the lighting of the many sets and locales, from interiors to exteriors, and onstage and off. Louis Rosen has written the original music played live by the different combinations of the three pianists while Dan Moses Schreier has created the sound design for this large undertaking. However, it is Boritt’s extraordinary ever-present setting that is always in view whether depicting the interior of a theater, a hotel room, the boardwalk or homes either shabby or elegant.

James Lapine’s stage adaptation of Moss Hart’s celebrated autobiography of his early years, Act One, is a bit unwieldy at under three hours in length as it does contain so many characters and incidents. However, like an absorbing mini-series you have lived with over a period of time, you will be sorry when it is over. Andrea Martin as three women important in the early life of Hart and Tony Shalhoub in his portrait of George S. Kaufman may be giving the best stage performances of their distinguished careers. Next season when you see the revival of Kaufman and Hart’s later Pulitzer winning comedy, You Can’t Take It With You, you can recall that you were there at the beginning of the famous collaboration.