DeMone and Max Roll in a scene from “About Clarence and Me” (Photo credit: Roger Gonzalez)

Among the myriad relationships that have been written into books, plays, movies, etc., a difference in age–whether it be five years or 40–is a timeless and effective tool used to draw out and put on display the generational differences that exist between two characters. About Clarence and Me–the new play by Walter Jones and Scott Hiltzik–is a prime example of the way this device can be used to bring alive a relationship on stage.

Set in Los Angeles in the early 1990’s, the two central characters in Jones and Hiltzik’s new collaborative project are separated in age by nearly forty years, and come to encounter each other with pasts and experiences glaringly lacking in commonality. Sam, a thirtysomething Caucasian, is a professional piano tutor who has so far in his life seen moderate success and prosperity. The play begins with Sam (played by Max Roll) sitting at his personal grand piano, awaiting the arrival of his newest student, the title-referenced Clarence. Clarence, played by Broadway alum DeMone, is a retired African-American septuagenarian that is undoubtedly set in his ways.

Much to Sam’s chagrin, Clarence turns out to be quite the handful as a student. DeMone’s interpretation of Clarence is that of an impatient and boisterous man, one who would probably prefer to gloss over the fundamentals of learning the piano if it meant that he could simply skip to playing tunes. His driving motivation is to learn the piano for his wife, and–despite his impatience–his focus is singular. DeMone’s larger-than-life persona is clear from the start, and the actor’s prodigiously charismatic personality is ever-present throughout the entire production. 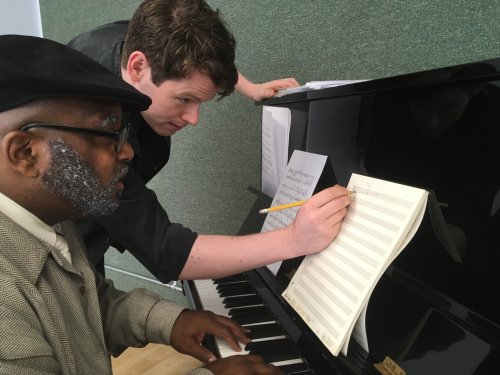 DeMone and Max Roll in a scene from “About Clarence and Me” (Photo credit: Roger Gonzalez)

Clarence’s character is written in stark contrast to that of Roll’s Sam, who is innately opposite of Clarence in every way. Disciplined, contained, studious, and entitled, Roll keenly plays against DeMone’s acting choices and physicality, making their differences all the more conspicuous.

To call About Clarence and Me simply a play is misleading, as the project features an entirely original score by co-writer Scott Hiltzik. A classical musician, Hiltzik’s music is technically striking but carries a modern flare. In additional to their finely tuned performances, both DeMone and Roll impress as musicians as well. Roll proves himself to be quite the accomplished classical pianist, demonstrating mastery of the keys by way of precision and constraint. DeMone, ever his opposite, produces from the piano a sound descendent of a ragtime piano roll, at times accompanied by the veteran singer’s sonorous growl. Directed by Hiltzik’s co-writer Jones, the duo’s intimacy with the material is plain to see in the final product. Full of nuanced moments both thematically and in performance, the writing team’s hands-on approach is responsible for this well-rounded and solid production.

Performed as a part of Theater for the New City’s Dream Up Festival, the gritty backdrop of New City’s Community Theater is a fitting backdrop for the racial and generational issues explored therein. Supported by the excellent performances from the show’s co-protagonists, About Clarence and Me is an impressive and creative outing from Hiltzik and Jones that should certainly make its way back to New York City following the conclusion of the Dream Up Festival.

Theater for the New City’s Seventh Annual Dream Up Festival

in association with Infinite Intel Productions

The Community Theater at Theater for the New City, 155 First Avenue, in Manhattan