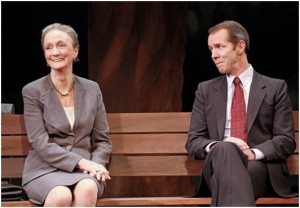 Kathleen Chalfant and Paul Niebanck in a scene from Lee Blessing’s “A Walk in the Woods” (Photo credit: Carol Rosegg)

While the relevance of Lee Blessing’ s 1988 comedy drama, “A Walk in the Woods,” may have abated with the end of the Cold War, the new reason to see Keen Company’s revival is the astonishing Kathleen Chalfant in the role of the Russian negotiator previously played by such male actors as Alec Guinness and Robert Prosky. As the urbane, cynical veteran diplomat with a sense of humor, Chalfant gives a performance which is a show in itself. Unlike some of her recent roles which appeared to waste her enormous talents, this two-character play makes the most of them. Director Jonathan Silverstein is also due for his share of the credit for this polished and graceful production.

Based on a real event that took place in 1982 between American diplomat Paul Nitze and Russian negotiator Yuli Kvitsinsky, “A Walk in the Woods” is mainly an astute character study of two unique personalities from opposing cultures who come to discover that they have many things in common. American diplomat John Honeyman (Paul Niebanck) has been sent to Geneva to replace the previous leader of the U.S. delegation to the arms negotiation. His opposite number is the celebrated and eminent Irina Botvinnik who has been the Russian counterpart for many years. Irina has suggested a walk in the woods both to get some air after the stuffy conference rooms and to talk away from the reporters. John is suspicious as he is worried about what the press will think and doesn’t believe that people on opposite sides of the table ought to share private moments.

However, that is just what the sly, artful Irina wants – to get to know him better and for them to become friends, not just colleagues. They first speak of what they know about each other. Irina finds John too formal; he tells her that he knows she is good at saying “no” and can still be charming. They talk of their likes and dislikes. They speak of their different countries and their histories and  geographies, both nations that have expanded to complete their borders. Irina tries to teach John that no one wants them to succeed and John discovers that the Russians are currently waiting for the outcome of the presidential election. And then John offers a proposal that Irina thinks is a good one but she will have to risk putting herself on the line with her superiors. In the course of a year, they do become friends as well as adversaries. 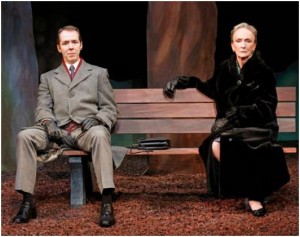 Paul Niebanckand Kathleen Chalfant in a scene from Lee Blessing’s “A Walk in the Woods” (Photo credit: Carol Rosegg)

As the sophisticated, experienced Irina Botvinnik, Chalfant is utterly delightful. She makes Irina’s tactic of changing the subject into a fine art. Her charm is evident even when she is disagreeing with her opposite number. Her Irina’s wry sense of humor is conveyed in all her remarks, but it is often difficult to know when she is kidding and when she is serious, another calculated tactic. And Chalfant’s timing is impeccable making the most of both her banter and when she is deadly serious. Niebanck’s John Honeyman describes himself as “a pretty serious, stiff, even priggish type of person” and his diplomat is all of that. What is missing is the appeal of the innate charm that will get him what he wants. Nevertheless, he makes a fine adversary to the more laidback Irina and the two of them are always a pleasure to watch.

The wooded grove on “a mountain slope on the outskirts of Geneva” has been beautifully rendered by designer Scott Bradley in a flat impressionistic style. Along with lighting designer John Bradford and props designer Ricola Wille, the passage of time is delicately indicated. Bradford’s subtle lighting as well as the elegant seasonal costumes by Amanda Jenks and Jennifer Paar evoke the passing months.

“A Walk in the Woods” may not be as startling as it was when it was first here, but in the hands of all of these theater professionals, it is a pleasant evening of excellent performances and still has some truths to tell.