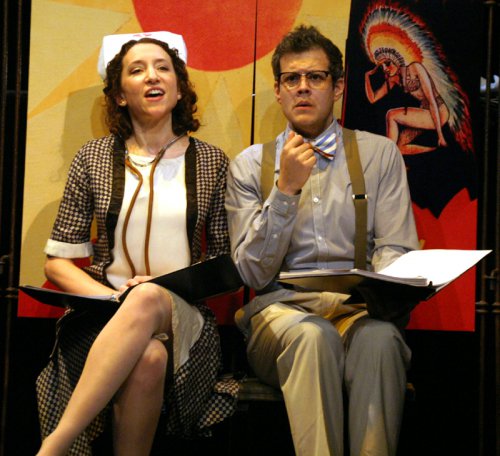 Although comedian-singer Eddie Cantor isn’t much remembered today, he was a BIG star of revues, musical comedies, radio and films in the first half of the twentieth century, important enough to have shows created around the persona of his famous bouncing little man who triumphs in the end, along with his well-known eye-rolling routine for which he was rewarded with the nickname “Banjo Eyes.” After headlining in seven Ziegfeld Follies, Cantor starred in the 1928 Whoopee, his best-known musical comedy, which was produced for him by Florenz Ziegfeld in a lavish pre-Depression spectacle with a cast of 91. After a successful run of 407 performances, Ziegfeld shut down the show in order to rush into production an “all-singing, all-color” Hollywood film version of it in 1930 when sound became all the rage. The original stage cast also included singer Ruth Etting who first sang what was to become her signature song, “Love Me or Leave Me.” For the film version, the original songwriting team of Walter Donaldson (“My Blue Heaven”) and Gus Kahn (“My Buddy,” “It Had to Be You”) wrote another song hit, “My Baby Just Cares for Me.”

Not seen locally since 1979, Musicals Tonight! is giving this light-hearted romp another outing as a concert staging in the Goodspeed Opera House version which streamlines the plot and adds two additional Donaldson hit songs: “Yes Sir, That’s My Baby” (lyric By Kahn) and “You,” lyric by Harold Adamson. The hit song “Love Me or Leave Me” is reassigned to two of the romantic leads, rather than the unrelated role of Leslie which is eliminated in this version. While the William Anthony McGuire book is as light as helium and just as silly, typical of its era, director Thomas Sabella-Mills’ fast-paced production with a cast of excellent singing comedians does not give the audience much time to think about the plot’s inanities. 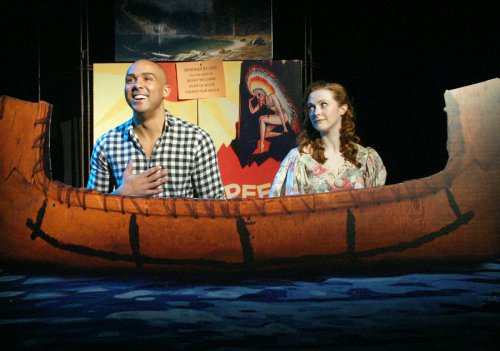 Lee Hollis Bussie as Wanenis and Katie Emerson as Sally in a scene from “Whoopee” (Photo credit: Michael Portantiere)

Whoopee has the typical book of a twenties or thirties musical comedy – a plot that is an excuse for comedy, music and dancing without much connection to reality. Based on the Owen Davis play, The Nervous Wreck, Whoopee’s hero hypochondriac Henry Williams (the Eddie Cantor role) has spent the last three years in Mission Rest, Arizona, for his health, being seen to by Nurse Mary Custer who is in love with him. Also in Mission Rest is rancher Judson Morgan and his daughter Sally promised in marriage to Sheriff Bob. However, Sally is in love with a local Native American Wanenis who is not acceptable to her father even though he attends Dartmouth and is Phi Beta Kappa and quarterback of the football team.

On her wedding day, Sally elopes with Henry, telling him that Sheriff Bob wants to safeguard her and get her out of town. They end up at the Bar M Ranch where they are joined by absentee owner Jerome T. Underwood, the richest man in Arizona, his man-hungry daughter Harriet and his weak-kneed son Chester. Sheriff Bob, Rancher Morgan, Nurse Mary and Sally’s lover Wanenis come in hot pursuit. After a great many complications, including Henry and Sally taken for cooks by Underwood’s understaffed team, and a side trip to an Indian reservation, all works out with several happy marriages.

Aside from the famous songs already mentioned, the clever lyrics and jaunty melodies are also in evidence in the title song, “Makin’ Whoopee” (later Cantor’s signature tune), “Until You Get Somebody Else,” “Reaching for Someone” and “Go Get Him,” equally divided among the principals. The reliable James Stenborg is both vocal arranger and music director, performing the entire score on the solo piano. Sabella-Mills, also working as choreographer, does an excellent job with the robust and lively ensemble made up of Nicole Corris, Lauren Fijol, Jared Green, Nicholas Kuhn, Matthew Ragas, Catie Shelley, Jeff Smith, and Nate Suggs in the show’s few production numbers. 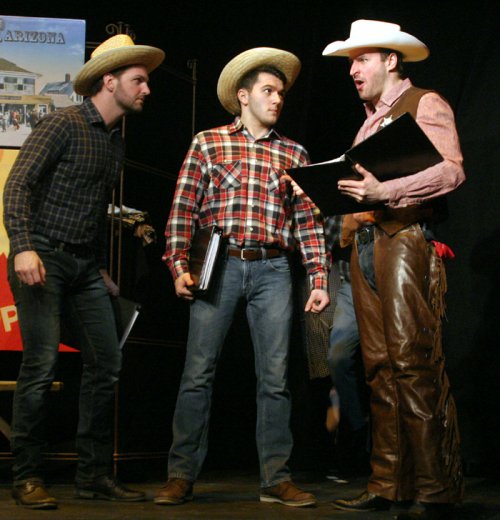 While the cast has strong voices, they are best at the comedy, taking it seriously without sending it up. At the center is Blake Joseph as hypochondriac Henry, and while not as outrageous as Cantor would have been, all of his jokes land as they should. As his nurse who won’t let him out of her sight, Amie Bermowitz gives a big performance as does Elise Castle as the voracious man-hungry Harriet. Katie Emerson and Lee Hollis Bussie make a fine romantic team as Sally and Wanenis, respectively. Morgan McCann has the thankless role of the dull-witted Sheriff Bob but he manages to make him a rowdy, bullying bigger-than- life character at all times. Jonathan Horvath is amusing as Sheriff Bob’s equally bumbling sidekick Andy. Tony Triano has fun with the blustery, loud Jerome T. Underwood, continually flinging his rank and income around.

Whoopee is interesting as an artifact of another age of musical comedy. In addition, it has a gloriously lilting score of songs, many of which you will recognize as standards of the American Songbook. It is also a fine example of the Broadway musical written around the talents of a famous comedian. The energetic and vivacious cast under the direction of Thomas Sabella-Mills makes this a pleasant evening of light entertainment.