During the first half of the 20th century, the perception of women and their place in society was archaic and harmful to say the least. In fact, it wasn’t until the late 1950’s that the widely accepted oversimplification of the role of women was truly called into question and brought under scrutiny. Documenting the influential and crucial decade between the ‘50’s and ‘60’s, Debra Barsha and Hollye Levin’s new musical A Taste of Things to Come is a very pointed yet enjoyable exploration of these transformative years for the housewife, told through the eyes of four women who have a common interest in cooking.

Each Wednesday afternoon, the four women gather in Joan’s (Paige Faure) Illinois kitchen and attempt to put together a recipe to submit to a Betty Crocker cooking contest in the hopes of winning the significant $50,000 prize. Playing the host of the party, Faure’s Joan is an immensely charming character, due in large part to the veteran actress’ powerful and elegant stage presence. Perfectly cast, Faure is an engaging and electric narrator with a warm and welcoming voice.

As for the rest of the cooking party, Joan’s companions are all women of different walks of life, and–though they are all housewives of Illinois–they each represent a different type of woman in the fifties. Autumn Herlbert’s Connie Olsen is a newlywed who is expecting, and is prone to mood swings associated with hormonal imbalance. When she bursts into song, her soaring soprano is the perfect ironic contrast to her colossally pregnant belly.

Allison Guinn’s Dottie O’Farrell is a married mother of four (and more by show’s end!), and her character represents some of the hardest truths behind the housewife stigma. While the other three women have moments early on that suggest they strive to break free of cultural stereotypes, Dottie takes pride in her nuclear family. Dottie is a hilarious person at times, but Guinn’s performance isn’t all humor; the actress brings out in Dottie a subtle darkness which adds real weight to the production. 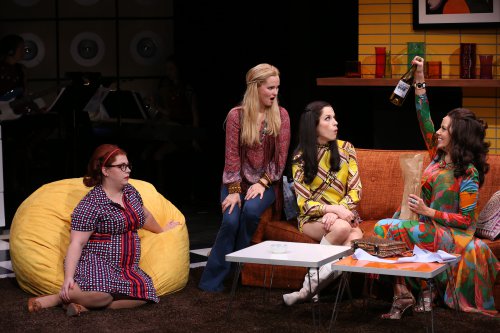 If Dottie is representative of the never-changing housewife, then Janet Dacal’s Agnes Crookshank is her polar opposite–a fiery and empowered single woman in her twenties. In an age when women were expected to find a man and hitch up, Dacal’s modern woman is way ahead of her time.

Though it’s the actresses that bring the show to life, the book and lyrics from Barsha and Levin are clever, relevant and original. Likewise their impressively constructed score is a lesson on American music in the ‘50’s and ‘60’s.

Lorin Latarro, director and choreographer, has conceived a fun and upbeat production that is brimming with personality. In each of the actresses, she has helped to create a complete, complex performance, to go with a seamless technical production. The set by Steven C. Kemp and lighting by Nathan W. Scheuer combine to create a dazzling theatrical spectacle, and the thoughtful design dedicated to differentiating each of the two acts is notable. Though there are many moving pieces that bring A Taste of Things to Come to life, Dana Burkart’s colorful and thoughtful costumes design are the icing on the cake; to wit they are beautiful, era-appropriate, and yet still contemporary.

Presented by The York Theatre at Saint Peter’s Church, A Taste of Things to Come is a culturally relevant and enjoyable piece of theater with a catchy score and a group of strong Broadway actresses.

The York Theatre Company, in association with Staci Levine and What’s Cookin’ LLC