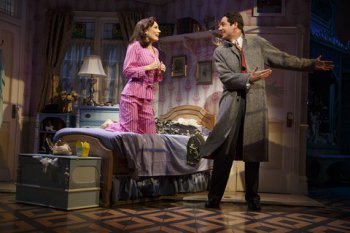 Laura Benanti and Zachary Levi in a scene from “She Love Me” (Photo credit: Joan Marcus)

I have pleasant memories of the original Broadway production of She Loves Me, the Jerry Bock (music), Sheldon Harnick (lyrics), Joe Masteroff (libretto) musical which starred the luminous Barbara Cook at the height of her powers.   Those beautiful sets and costumes, the direction of Hal Prince and the funny choreography of Carol Haney all have stayed with me.

The Roundabout Theatre Company’s production at Studio 54, though not the first Broadway revival, is at that splendid level of genius and geniality.  This beautiful bon-bon of a musical and will now give a new generation fond memories, too.

The story of a Georg Nowack (a charming and sexy Zachary Levi) and Amalia Balash (a rich-voiced, full-bodied Laura Benanti) who have been anonymous but ardent lonely hearts correspondents and who inadvertently become co-workers has been told in variation incarnations.  In She Loves Me they work together at a Parfumerie where they endlessly gripe and rub each other the wrong way.  To the audience, at least, it’s clear that they will inevitably be lovers.

Their co-workers at Maraczek’s Parfumerie include the old-school but lovable Mr. Maraczek (an elegant, touching Byron Jennings); young, eager-beaver delivery boy Arpad Laszlo (a totally endearing Nicholas Barasch); the daffily sexy Ilona Ritter (Jane Krakowski at her sensual, cooing best); slick lover-boy Steven Kodaly (a surprisingly oily Gavin Creel); and the obsequious, meek clerk Ladislav Sipos (Michael McGrath, finding his perfect inner European shlub).  They make up a microcosmic look a Middle Europe that will be devastated not ten years later; but Right now, in this frozen in time portrait of loveliness, melody, lovely clothing and fine manners, they combine to become a bona-fide reason to escape reality for a couple of hours. 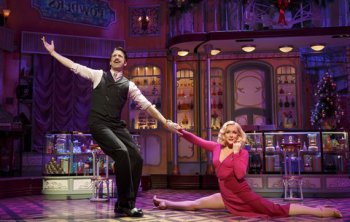 Gavin Creel and Jane Krakowski in a scene from “She Love Me” (Photo credit: Joan Marcus)

The melodious and fine tuned score carries the show along sung by a cast of experts, who also, when called upon, which is not frequently enough in this show, move effortlessly through Warren Carlyle’s funny, well-integrated choreography.   The beautiful sets by David Rockwell are a constant astonishment of color and detail while Jeff Mahshie’s sumptuous and period-perfect costumes add their own details to the plot.

Donald Holder’s lighting makes the most of the constantly moving scenery.

Scott Ellis’ direction avoids caricature, even in the most broadly drawn characters like the man-hungry Ilona, the gigolo Steven and the scared, but pragmatic clerk Sipos.   He make the one touch of melodrama, involving Maraczek’s marriage, seem human and a touch tragic, helped by Mr. Jennings subtle, but exuberant performance.  He also draws a tender performance from Ms. Benanti who gets to use the more operatic part of her marvelous voice.

This is a She Loves Me that moves the audience equally to tears and laughter mostly through the power of the iconic Bock/Harnick score which includes the lovely “Vanilla Ice Cream,” the exuberant “She Loves Me,” the sweet and sad “Will He Like Me?” and the amusing running bit, “Thank You, Madam,” sung by the entire staff as customers leave.  The singing by all was first rate and emotionally rich.