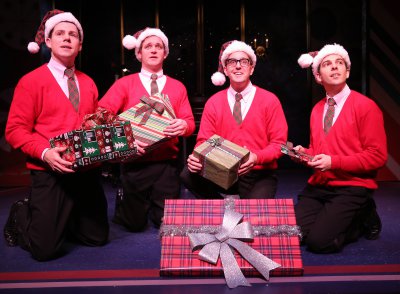 Plaid Tidings, written and directed by Stuart Ross, is the logical, and delightful, descendant of his Forever Plaid, the story of a plaid-clad quartet of close harmony singers cut down in their prime.

The tale of their demise in 1964 en route to a show in their native Pennsylvania and their temporary 2015 resurrection still works brilliantly.  Even though Tidings cover a good deal of the Forever Plaid musical territory, the holiday songs they’ve added give this show seasonal warmth.

The humorous banter among the four and their slide-splitting re-creation of the Ed Sullivan show, the main feature of the second act, are reason enough to see Plaid Tidings.  Add in their four-part close harmony renditions of more than thirty songs, ranging from Christmas staples to Calypso to ethnic to American Songbook, and you’ve got a perfect holiday frolic.  There was even a faux-thug, rap “’Twuz Tha Nite B4 Xmas” and a version of that old-favorite, “Mister Sandman” (F.D. Ballard) called “Mr. Santa,” especially written for their ad hoc appearance on East 54th Street.

Dressed in their handsome, if nerdy, trademark plaid jackets (designed by Debra Stein) the group makes their (re)appearance on the stage of the York Theatre as dazed, confused and cute as ever.   Frankie (Bradley Beahen), the leader, Sparky (Jose Luaces), the smart aleck, Jinx (Ciarán McCarthy) the quiet cutie-pie and Smudge (John-Michael Zuerlein), the awkward, lost-in-space guy: They are the Plaids who must perform one more time to gain their place in that other place way, way upstairs.

As they remember their routines, the pace quickens.  They quickly run through the usual repertoire from that fondly remembered (by those of us of a “certain age”) period where Rock and Roll was eroding the market for the clean-cut entertainments of harmonists like the Plaids. 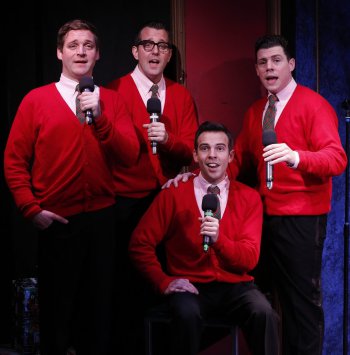 There’s “Sh-Boom (Life Could Be a Dream)” (Jimmy Keyes/Carl Feaster/Claude Feaster/Floyd McRae) performed with “plumber helpers”; “Bésame Mucho” (Consuelo Velázquez), on the edge of cliché; a wonderful sequence using bells; a crumb tossed to the Jews, “The Dreidel Song”; some pseudo-sexy bits like “Fever” (Eddie Cooley/John Davenport) and “Hey There” (Richard Adler/Jerry Ross); and a plethora of the usual Christmas songs all given those luscious, layered harmonies.

Although it helps to be familiar with the style the Plaids are lampooning, the show can be appreciated as a gentle, happy, comic musical caper with nothing on its mind but pleasing the audience—and getting into heaven.

James Followell, the pianist/conductor and Joseph Fitzgerald, the bassist, were willing and funny cohorts in the show playing the new musical arrangements of John Raitt, Brad Ellis, Raymond Berg and David Snyder.

Stuart Ross, the director and stager of the songs, kept things humming along.  York’s artistic director, James Morgan designed the flexible, paneled set that turned inside out when needed.

Welcome back, Plaids, and thanks for the harmonies and the fun.