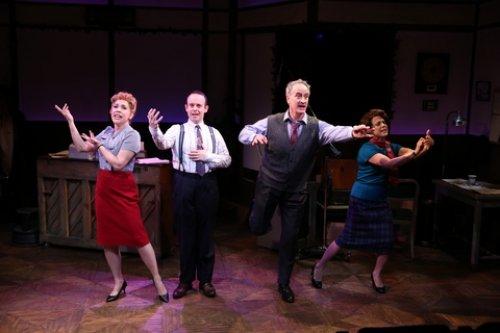 In this age of famous-for-15-minutes, where the internet produces instant celebrities by the thousands, it is sad that yesteryears’ talented stars of stage and film are too often forgotten, except, perhaps, by the ardent fans of Turner Classic Movies.

One of these forgotten celebrities is Judy Holliday, the Oscar and Tony award-winning actress who entertained millions with her films and stage appearances in the 1940’s, 50’s and 60’s.  She died of breast cancer in 1965 at the age of 44 and thereafter her star faded quickly.

Willy Holtzman has written Smart Blonde to amend this situation.  Smart Blonde takes on, perhaps, too much, telling Holliday’s entire life in ultimately unsatisfactory tiny chunks, never digging deep enough, but held together by its hardworking star, Andréa Burns (who was just as terrific in On Your Feet and In the Heights). 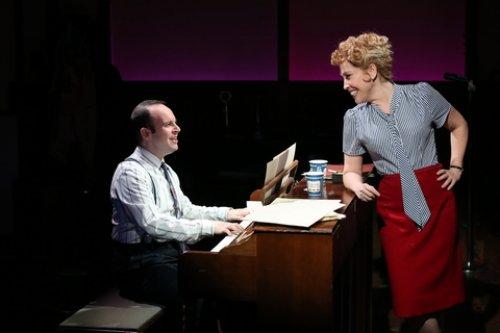 Using the premise of a 1964 recording session that stimulates her many memories, good and bad, the play serves as a moving tribute to Holliday even though it doesn’t shy away from the darker side of her life.  In truth, it is the contrast between her brilliant professional career and her personal unhappiness that makes Holliday and this play so moving.

Tony Ferrieri’s messy recording studio set smartly morphs into Holliday’s home, the Zanuck studio, the Village Vanguard, etc. With Michael McDonald’s period and character-driven costumes, they are the perfect backdrop to her story which is told entirely in flashbacks, beginning in the Tuvim home where her mother Helen constantly stirs things up.  (Tuvim—or “holiday” in Hebrew—was Holliday’s birth name.)

It follows her through her youthful performances with Adolph Green, Betty Comden and Leonard Bernstein in their homespun revues at the Vanguard, through her meteoric rise via her star turn in Garson Kanin’s Born Yesterday, on to a bout with blacklisting and through her big success in films and the musical Bells Are Ringing.  There are hints of bisexuality, discord with her husband David Oppenheim and a red-diaper childhood that followed her into adulthood and nearly ended her career before it took off.

Unfortunately, after Bells Are Ringing Holliday’s star faded quickly and her personal life, at first buoyed by motherhood and a happy relationship with jazz saxophonist Gerry Mulligan, took a turn for the worse due to depression and the cancer which took her life. She desperately worked to make what would be her final musical, Hot Spot, succeed which turned out to be an uphill battle.

Holtzman paints a portrait of a complex genius whose IQ hovered around 170, a woman who hid behind an artificially high girlish voice and played the dumb blonde too often in order to keep her career in motion.

Burns’ Holliday captures the conflicted woman whose brain power could not overcome her insecurities concerning body image and the stresses of stardom.  Burns almost gets the voice, missing only Holliday’s smokiness, but her enthusiasm and talent communicate Holliday’s complexities and conflicts. 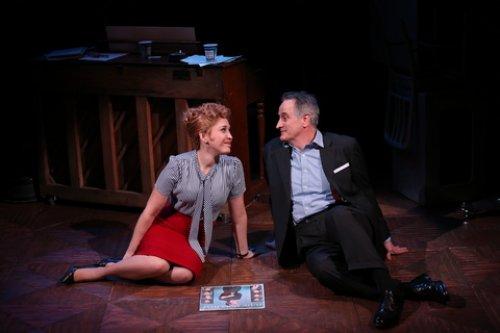 Andrea Bianchi plays all the women in Holliday’s life including her mother, Betty Comden, and her left-leaning lesbian lover Yetta.  Bianchi’s Ruth Gordon is worth the price of admission!  It provides a witty comic highpoint of the evening.

Mark Lotito and Jonathan Spivey similarly play all the men in Holliday’s life from the staff at the recording studio to Bernstein, Oppenheim, Zanuck, Kanin, Mulligan, George Cukor, etc., making each distinct with the help of McDonald’s costume accessories.  They both acquit themselves brilliantly and tirelessly.

Peter Flynn directs with clarity and a sense of rhythm that makes even the disjointed storytelling work.

Lighting designer Alan Edwards has to be noted for his ability to turn the single set into many locations.