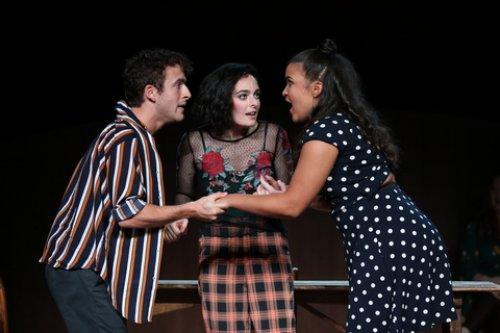 In her own time, poet Edna St. Vincent Millay (1892 – 1950) was a rock star and a best-selling author until illness and postwar culture dimmed her luster. Still she fascinates with her bohemian lifestyle, beauty, love affairs with both men and women, feminist views, and effortless sounding poetry. In recent years, her life has again obsessed biographers and playwrights in such works as Savage Beauty: The Life of Edna St. Vincent Millay (2001), Becoming Vincent (2013) and What Lips My Lips Have Kissed: The Loves and Love Poems of Edna St. Vincent Millay (2014). Add to this list the adventurous Transport Group’s world premiere musical Renascence, with book by Dick Scanlan and lyrics from Millay’s own poems set to music by Carmel Dean. Unfortunately, the new show is often arch and pretentious and the musical settings are entirely in the wrong style for Millay’s lyrics from the 1920’s.

The show focuses on the creation of “Renascence,” an ecstatic nature poem which catapulted Millay to fame at age 20. Known to her family as Vincent, Millay had won every poetry prize she had applied for by the time she was in high school in Camden, Maine. In 1912, her mother (played with strong appeal by red-headed Katie Thompson) suggests that she write something for a contest which not only included a $1,000 cash prize but publication in a volume to be called The Lyric Year. When the poem fails to win any of the three top prizes, it causes a scandal and brings Vincent to the attention of philanthropist Caroline B. Dow who pays for her to attend Vassar College. There she is a campus celebrity, begins her sexual experimenting and shifts to writing autobiographical poems as opposed to the metaphysical ones she had written earlier. After graduation, she moves to Greenwich Village and joins its bohemian life as a media celebrity.

Under the direction of Transport Group’s artistic director Jack Cummings III and author Scanlan, a youthful cast of six play all of the roles. The musical begins with Jason Gotay as the Editor on stage and the rest of the cast in the aisles attempting to recreate the opening lines of “Renascence” before going on stage and becoming the members of Vincent’s family, Mother, Father, and sisters Norma and Kathleen. In trying to demonstrate how liberated Vincent was, Hannah Corneau is asked to be arrogant, affected and egotistical, which makes her very unpleasant. (The famously red-headed poet is not given her accurate look.) The multiracial cast plays the parts with no regard to age or gender, with both Kathleen and Caroline B. Dow played by a man (Danny Harris Kornfeld) which does not suggest that Vincent was attracted to both genders. The technique used here is very unconvincing. However, Gotay and Donald Webber, Jr. playing competing female classmates for Vincent’s attention are amusing. 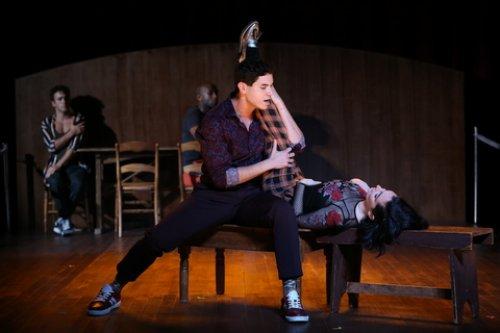 The second act again breaks the fourth wall with the cast asking members of the audience to read letters to the Editor of The Lyric Year condemning the choice of the first prize winner. In the final section of the musical, the audience is invited to come on stage to a masked section suddenly revealed to be backed by a blue sky and covered with grassy lawn on which the cast dance and sing the complete “Renascence” in a sort of choral work cum ballet. Regrettably, Scott Rink’s choreography is too child-like in its simplicity to complement a poem as metaphysical as this.

The sung lyrics are all drawn from famous Millay poems such as “Lament,” “Afternoon on a Hill,” “What Lips My Lips Have Kissed,” Recuerdo,” and “When the Year Grows Old,” as well as some unfamiliar ones like “Dear Papa” and “Carpe Diem” which did not make it into the standard collected edition. While Dean’s melodies are pleasant, they do not evoke the atmosphere of the poems which are redolent of their 1917-1928 period. Too many of the songs have added a great many “Oohs oohs oohs” which trivializes the meaning of the poems. Best, however, is “The Ballad of the Harp Weaver” sung by Webber, Jr., which being a ballad is suited to a musical setting as many of the others are not.

The book of the musical is rather vague about some things: calling Millay the first woman to win the Pulitzer Prize in Poetry does not explain how two other women won it before her. The treatment of her profligate father who early abandons the family is rather confusing, suggesting he had died but then he shows up much later at one of Vincent’s book signings. As depicted by Corneau in Renascence, Millay seems to make choices to shock rather than because she believed in freedom for everyone. This Millay is both self-absorbed and rather selfish, which may do a disservice to the poet’s life and reputation. 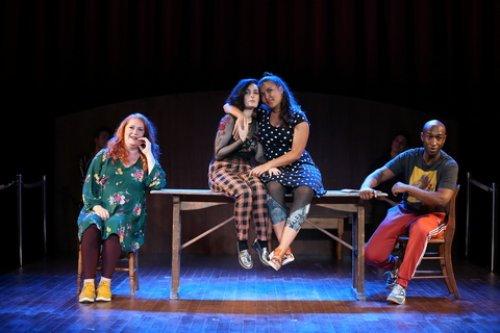 Until the final sequence, scenic designer Brett J. Banakis relies on a bare stage except for a table, a few chairs and two benches which are continually being moved forward until the table is at the apron of the stage at the point when Vincent is autographing her first published book. The framework of the show with the actors in the aisles trying to recreate the poem suggests a let’s put on a show kind of concept as does the minimal scenery but this is dropped early on. Costume designer Ásta Bennie Hostetter has also put the actors in contemporary street clothes which adds no atmosphere but does give the musical a modern feel, for better or worse. The large unseen orchestra led by Geraldine Anello gives the music a chamber sound in Michael Starobin’s orchestrations which is at odds with singing the lyrics in the context of the biographical plot.

Transport Group’s Renascence is an interesting attempt to restore Millay’s famous poem to its rightful place in the American literary pantheon. However, the initial experimental form of the show is not carried out all the way through, and shifts in tone damage the overall concept. Some of the talented and valiant cast cannot help but be defeated by roles for which they are unsuited, while others make their characters self-important and overbearing. The music seems at war with the style and subject matter of Millay’s lyrics. And worst of all Edna St Vincent Millay, rather than being the heroine of her own story, comes off as extremely opinionated, pompous and unsympathetic. One wonders what she would have said about being depicted this way.