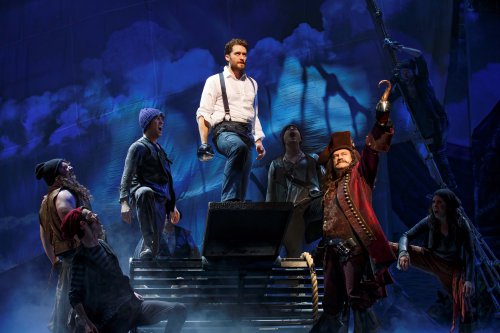 Television superstars Matthew Morrison and Kelsey Grammer return to Broadway in the big new musical, Finding Neverland, purporting to be the story of how Sir James Barrie came to write Peter Pan. Based on both the 2004 Johnny Depp film of the same name and the earlier play, The Man Who Was Peter Pan by Allan Knee, the new musical offers them little to do in an underwritten plot and book by British playwright James Graham. As a result, they come off as one-dimensional as do all of the other characters. Ironically, the true story is much more fascinating but, alas, too dark to be family entertainment for which this is geared.

Directed by the usually innovative Diane Paulus (whose credits include the critically acclaimed Hair, Porgy and Bess, Pippin), Finding Neverland has been created by the numbers and its staging suggests a great many earlier musicals. The score by Gary Barlow & Eliot Kennedy, long associated with the UK band, Take That, and writing their first musical, is filled with serviceable and prosaic ballads and anthems (with many false rhymes) to pleasant melodies but none which really forward the story. With titles like “Believe” and “Neverland,” they often have an overly familiar feeling. While Finding Neverland steals shamelessly from the 1954 Jule Styne-Comden & Green musicalization of Barrie’s play Peter Pan, it never comes close to the charm of that earlier musical.

Although the story begins in 1903 and the scenery and costumes are very period appropriate, the production is not entirely faithful to its Edwardian era. The heroine Sylvia Llewelyn Davies is seen several times in Kensington Gardens without hat or gloves, absolutely unheard of at that time for a lady, and choreographer Mia Michaels (of So You Think You Can Dance) has the society guests at Barrie’s 1903 opening night party dancing in a style that suggests later 1960’s dances in which the participants jump up and down, rather difficult in the tight gowns of 1903.

Finding Neverland begins with Scottish playwright James Barrie (played by Morrison), the toast of London, recounting his story: after two huge successes with Quality Street and The Admirable Crichton, Barrie has a very big flop with his next play The Wedding Guest, to the chagrin of feisty American producer Charles Frohman (Grammer) who has taken a long term lease on London’s Duke of York Theatre. Needing a new play in a hurry to fill the theater, Barrie discovers that he has writer’s block and is horrorstruck to find he is writing a rehash of his earlier successes which he destroys. 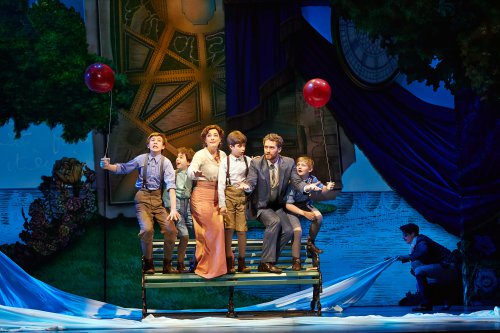 Using Kensington Gardens to have peace and quiet to think and write, Barrie meets the Llewelyn Davies boys (George, Jack, Michael and withdrawn Peter) playing pirates while chaperoned by their widowed mother Sylvia (Laura Michelle Kelly) who has a cough that won’t go away. Barrie becomes enchanted by the boys’ games as well as their mother, and spends more and more time with them, to the annoyance of his social climbing wife, Mary (Teal Wicks), a former actress.

While Sylvia’s mother Mrs. (George) Du Maurier (Carolee Carmello) takes an instant dislike to Barrie whom she describes as “that man is a grown-up behaving like a boy,” the pieces of the Peter Pan story come together for Barrie (the Barries’ dog Porthos which his wife wants tied up outside suggests the Darlings’ Nana, Frohman’s cane casts a long shadow like a hook, the light bouncing off Peter’s knife suggests a fairy, Frohman’s saying that the clock is ticking, etc.) The musical continues up through the fabulously successful opening night of the play Peter Pan, in 1904.

Aside from his five years as Will Schuester on Glee, Morrison has demonstrated his charisma in such previous New York stage musicals as Hairspray, The Light in the Piazza and South Pacific. Unfortunately, here all he is offered for a characterization by the writer is that he is Scottish and a successful London playwright which is not enough to build a role. So to Grammer, who has also previously appeared on Broadway in the 2010 Tony Award winning revival of La Cages aux Folles as well as his four times Emmy winning role as the beloved Frasier Crane, is simply asked to stand around and say one-liners. Kelly’s Sylvia is a sweet ingénue, nothing more, nothing less. Carmello and Wicks are given a bit more to do as the unpleasant and disapproving Mrs. Du Maurier and Mary Barrie, respectively. 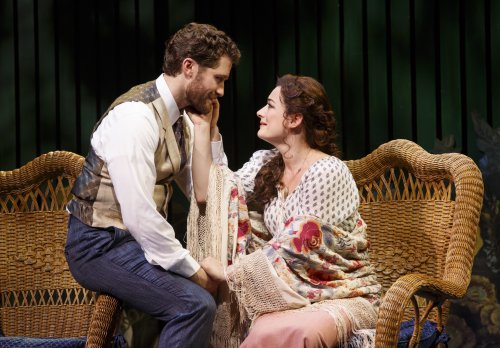 The four Llewelyn Davies boys are played alternately by three actors each. At the performance under review, Aidan Gemme made Peter a complex, troubled young man, while Sawyer Nunes as the oldest brother George was quite forceful. As staged by Paulus and Michaels, the finale of the first act, a wild hallucination made up of three songs, is the only exciting musical sequence in the show, but it ultimately ends up with a flat and generic ending which brings down the curtain for the intermission.

Scott Pask’s sets are a combination of the realistic and the surreal, with a bizarre and distracting collage backdrop for the Kensington Gardens sequences. The authentic looking costumes by Suttirat Anne Larlarb are quite attractive for their Edwardian period, except for Sylvia’s unaccountably missing hats. Kenneth Posner’s lighting occasionally reaches for a mysterious effect but tends to fall short. Other members of the large production team include projection design by Jon Driscoll, illusions by Paul Kieve, air sculpting by Daniel Wurtzel, flying effects by ZFX, Inc., as well as additional flying effects by Production Resource Group.

Finding Neverland is the sort of show you want to take to your heart, but this musical which feels like it is was created by a committee is devoid of magic. It remains a big colorful, noisy musical which may still appeal to children of all ages who are fans of Peter Pan. Ironically, the true story of James Barrie and the lost boys, an unbelievable story, is yet to be told. And yes, Peter Pan does fly!