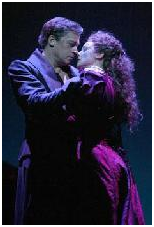 By Matt Windman
Have you ever experienced the over-stimulated, melody-infused thrill of a show composed by Frank Wildhorn, who is responsible for such Broadway financial and critical belly flops as “The Scarlet Pimpernel” (all three versions of the musical), “Jekyll and Hyde,” and “The Civil War”? Have you at least heard “This is the Moment” belted at a beauty contest or Bar Mitzvah?

If not, one should expect the following at a Frank Wildhorn production: watered-down, action-based versions of classic literature; the curtain to rise on a mad guillotine blood bash in France, or perhaps a bunch of English commoners screaming madly about the new murderer in town; soapy love triangles involving doctors, whores, spies, slaves, and maybe a monster or two; and, of course, lead characters who, after getting involved in crazy adventure schemes, randomly break into loud, sweetly melodic but structurally aimless pop anthems with lyrics and melodies so repetitive as if to drill x-number of notes and words into a spectator’s head prior to intermission.

“Dracula, the Musical,” based on the classic Bram Stoker horror novel, with book and lyrics by Christopher Hampton and Don Black, represents a terrible misuse of talent in the contemporary, corporately controlled Broadway musical. The goal of Dodger Stage Holding in mounting “Dracula, the Musical” seems to have been to create another larger than life, tourist friendly show with the mentality of an amusement park spectacle. In other words, they wanted a Broadway musical for a non-musical theater audience.

And as many may remember, this is not exactly Broadway’s first vampire musical. In December 2002, another excessively large, bitingly bloody attraction opened at the Minskoff Theatre entitled “Dance of the Vampires.” While “Dance of the Vampires” consisted mainly of horribly misconceived exercises in camp comedy, a la “Springtime for Hitler,” the book of “Dracula, the Musical” actually takes itself frighteningly seriously. (The only moments of, well, at least intended humor, come from a supporting Texan character who spits out random lines like “Nothing worse than crumbs in the bed.” At the performance I attended, he and another actor chuckled at how unintelligent their dialogue was.) So while it was possible to laugh off “Dance of the Vampires,” “Dracula, the Musical” is just a bad, often boring show for anyone who cannot find complete satisfaction in a leading man who floats out of a coffin, automatically moving set pieces, and ghost-attired chorus girls flying from strings.

So, here is the plot, for those unfamiliar with the Dracula saga: In Transylvania, Count Dracula (Tom Hewitt) sucks the blood of young Jonathan Harker and sets his fangs on the innocent, English girl Mina Murray (Melissa Errico), Harker’s fiancé, who we are told is of “good blood.” And about twenty minutes into the show, the Count is young and powerful again, and, set to a keyboard synthesizer-influenced band, he breaks into the pop cry “Fresh Blood.”

The show then travels to the tale of Renfield (Don Stephenson, a talented actor who deserves to be in a better show than this). The character appears twice in the show, and despite the efforts of Stephenson, these scenes do little more than hurt the show by slowing down the story and focusing on random parts of the novel that make little sense in a stage environment. (For example, a random song dedicated to the incredible wonders of the modern world, with references to hot air balloons and sewing machines.) The randomness is also apparent in the story of Lucy Westernra (Kelly O’Hara), whose character receives a patter song about the men who want to marry her before she is undressed, bitten, and turned into a creature of the night at the end of the first act. And in act two, the plot continues to drag along until Dracula and Mina declare their love for each other, and as in the novel, the monster disappears into the night.

One must give credit to Tom Hewitt for taking on a role that basically puts his entire body in the hands of the show’s stagecraft team. One assumes that he is safe, but his levitations and artificial accent do not hide, but only dress up the flaws and sloppiness of the show. Actresses Melissa Errico and Kelly O’Hara follow suit by giving their entire bodies to the show – not by flying across the stage, but by revealing bits of tasteful nudity in an attempt to demonstrate how the Count has taken away their sexual innocence.

The contribution of Des McAnuff to the show lies in his attempt to bring order and a sense of aesthetic movement and staging to what is ultimately an unfixable mess of visual attractions, poor writing, hard-working actors, and a mostly synthesized orchestra pit.

And so, with the exception of perhaps some kicks of visual stimulation from Catherine Zuber’s mix of period-appropriate and outlandish costumes, Howell Binkley’s lighting, and Heidi Ettinger’s scenic design, do not expect to fall under the mindless spell of “Dracula, the Musical.”