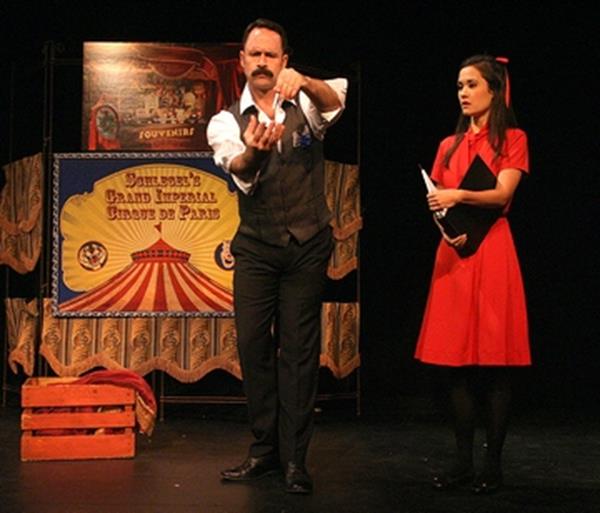 James Patterson as Marco and Ali Ewoldt as Lili in a scene from “Carnival!” (Photo credit: Michael Portantiere)

Everyone loves Lili and she is back in the crisp, taut, melodic revival of Bob Merrill’s Carnival! in a concert staging courtesy of Musicals Tonight!. Aside from the colorful production, the cast includes a skillful ensemble all with circus training from jugglers to acrobats. Following in the footsteps of both Leslie Caron (who created the part in the film version) and Anne Hathaway who played Lili in the New York City Center Encores! edition, Ali Ewoldt exudes charm and naiveté and has a lovely singing voice which reaches a high C. Not only has Thomas Sabella-Mills directed a warm, vigorous and animated revival, but this is one of the finest productions in Musicals Tonight!’s 16 year history.

Based on the 1953 MGM movie Lili, Michael Stewart’s libretto tells the story of B.F. Schlegel’s Grand Imperial Cirque de Paris, a somewhat seedy and rundown circus touring Southern France at the end of World War II. Among the problems besetting its denizens is the glib magician Marco the Magnificent who is two-timing his assistant, The Incomparable Rosalie, who always seems to catch him at it. Second on the bill is dour, solitary puppeteer Paul Berthalet, formerly a famous ballet dancer, embittered since his war injury which ended his career. And of course, Schlegel is always making promises on which he can’t make good. To this outwardly jolly, hothouse atmosphere comes the recently orphaned country girl Lili seeking a job from a friend of her father who it transpires has died. Immediately everyone falls in love with Lili including Marco, but Lili cannot understand why Paul is so mean to her while his puppets Carrot Top, Horrible Henry, Marguerite and Reynardo are so nice to her. Things eventually come to a boil when Marco attempts to take Lili away from Paul and the puppet tent where she has been working.

Besides offering Merrill’s much cherished song, “Love Makes the World Go Round,” and three songs not on the original cast album (“Magic, Magic,” “Tanz Mit Mir,” and “Golden Delicious”,) this revival of Carnival! has a company of circus performers that adds authenticity to the setting. Among the artists are jugglers Chaz Jackson and Drew Pournelle, acrobats Amy Shure and J. Morgan White, stilt walker Sarah Cooney, magician Steven Miller, strong man Jacob L. Smith, and puppeteers Stacia Newcomb and Jackson. Scott Guthrie who makes a fine Paul is responsible for all four of the puppet voices.

In addition to Sabella-Mills’ crisp direction, his musical staging is eye-filling and lively, making excellent use of the circus ensemble in such numbers as “Direct from Vienna,” “A Sword and a Rose and a Cape,” “Yes, My Heart,” “Tanz Mit Mir” and “Beautiful Candy.” The delightful numbers with the puppets include “Fairyland,” “Golden Delicious,” “Love Makes the World Go Round,” “Yum Ticky Ticky Tum Tum” and “The Rich.” As Lili, Ewoldt has a charming stage presence as the innocent and unworldly young lady from the country. Her songs increase in intensity from “A Very Nice Man,” to “Mira,” “Yes, My Heart,” and finally “I Hate Him” which she turns into a very impressive aria. Scott Guthrie’s Paul is a particularly strong characterization of this dour, unhappy man with much hidden love to give. His strong baritone is put to good use in such songs as “I’ve Got to Find a Reason,” “Everybody Likes You,” “Her Face,” and “She’s My Love.” 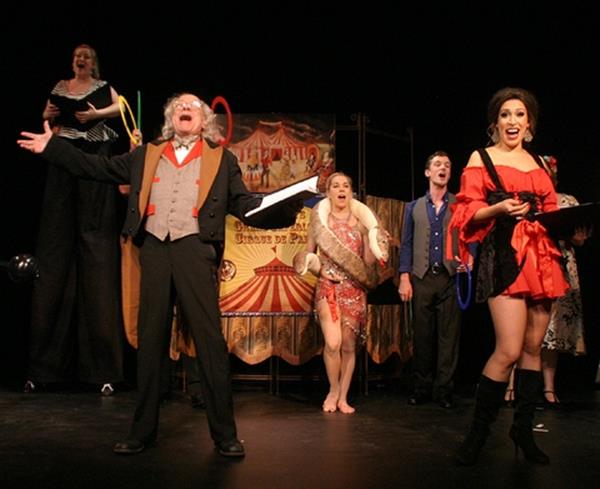 James Patterson makes a suitably glib and slippery ladies-man as Marco, and is outstandingly partnered by Catherine LeFrere who makes the most of her opportunities as his cynical on again/off again girlfriend Rosalie. Able support is given by Jeremy Lawrence as circus owner Schlegel, Michael Castillejos as Paul’s assistant Jacquot, and Jeffery T. Boerwinkle as Grobert, in charge of the circus’ souvenirs and Lili’s first boss. The musical direction by the accomplished James Stenborg makes the bouncy Bob Merrill melodies sound completely effortless as he accompanies the cast throughout the entire show at the piano. The bright and attractive costumes are uncredited in the program.

Bob Merrill’s Carnival! is a delightfully melodic show and Musicals Tonight! has given it a superb staging thanks to expert casting, beautiful singing, first-rate directing and insightful acting. This is an Off Broadway revival of a Broadway show at its best.