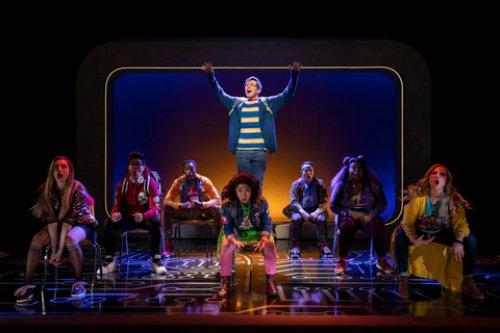 Will Roland as Jeremy and the cast of the new Broadway musical “Be More Chill” at the Lyceum Theatre (Photo credit: Maria Baranova)

Be More Chill, the dazzling and inventive musical based on the cult Young Adult novel by Ned Vizzini, has made a successful transfer to Broadway Lyceum Theater with the same cast and an expanded production team after a tryout production at Two Rivers Theater in Red Bank, New Jersey in 2014, and a YouTube soundtrack that has had over 150,000,000 hits which led to an Off Broadway production at the Pershing Square Signature Theatre Center during the summer of 2018. If memory serves after ten months, in some ways the show is strong and in other ways weaker. Bobby Frederick Tilley II’s costumes are more colorful, while Charlie Rosen’s orchestrations seem to be less so. On the plus side the performances of Will Roland as Jeremy, Jason Tam as the Squip, Tiffany Mann as Jenna and Lauren Marcus as Brooke have deepened. The show seems less comfortable at the Lyceum Theatre than it was at the Irene Diamond Stage but a good many more fans can now get to see the show at each performance.

Joe Tracz’s book has streamlined and condensed the original plot while giving it a new climax and Joe Iconis’ music and lyrics have created a new language for high school characters. Stephen Brackett’s eye-filling production of this fast-paced show which celebrated the digital era will thrill teens and college students, but will probably be too loud for older theatergoers who need to see this show to know what the younger generation is thinking.

The most popular theme for musicals about the younger generation in recent years has been that of “The Outsider” (popular in fiction back to The Catcher in the Rye) counting among them such hit shows as Dear Evan Hansen, Mean Girls, Heathers and Hairspray. Jeremy Heere, a New Jersey high school “loser geek whatever” (as Iconis’ song has him say) has only one friend Michael, who like himself, is a computer game nerd. Wanting to change his status, Jeremy decides to sign up for the school play, a zombie–apocalypse version of A Midsummer Night’s Dream, in order to get close to Christine, the girl of his dreams. He then runs into the school bully Rick, recently become one of the cool kids, who tells him to get a pill called a “SQUIP” or “Super Quantum Unit Intel Processor” which will implant itself in his brain and teach him how to dress, talk, and operate, getting him into the in-crowd. 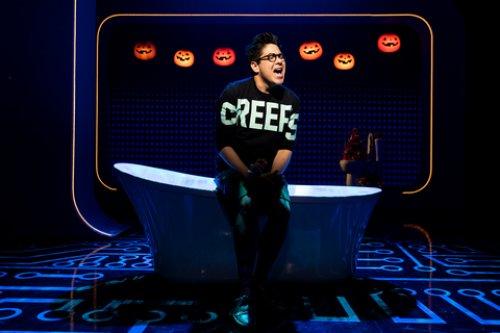 George Salazar as he sings “Michael in the Bathroom” in a scene from the new Broadway musical “Be More Chill” at the Lyceum Theatre (Photo credit: Maria Baranova)

After Jeremy buys and takes the “Squip” (which talks to him in the voice of Keanu Reeves),  his life immediately begins to change for the better and even his sad sack father who hasn’t gotten dressed since his divorce from Jeremy’s mother begins to notice. Chloe and Brooke, the most popular girls in school, and Jake, “awesomeness personified” take notice of him and treat him like an equal, although Christine still seems out of his league. However, Jeremy finds that his Squip wants to control him completely and seems to occasionally give him bad advice (like dropping his old friend Michael) but initially he likes the results. Ultimately, he discovers the hard way that technology has a downside and many regrettable things begin to occur before the final showdown.

Tracz (who also penned the book for the musical based on Rick Riordan’s The Lightning Thief) has not only created believable teenagers but gotten the lingo right making it sound like a private language. While Iconis’ score is heavy on the rock beat incorporating such instruments as the vocoder, alto recorder, theremin, and flugabone in Charlie Rosen’s orchestrations for the seven piece band, his lyrics are spot on to building teenage character and context. Ironically, the most effective song, “Michael in the Bathroom” is the most conventional theater ballad and as sung by George Salazar, a long time Iconis collaborator, is both poignant and moving, though at the performance under review he seemed to be trying too hard. 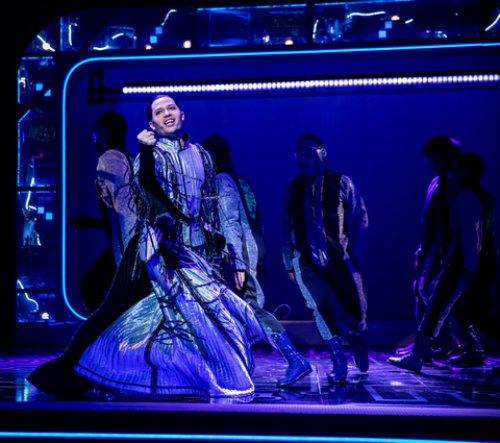 Jason Tam as The Squip and the cast of the new Broadway musical “Be More Chill” at the Lyceum Theatre (Photo credit: Maria Baranova)

Also effective are “The Pants Song” in which Jeremy’s Dad comes out of his funk and decides to make some changes of his own. Among the best staged numbers (with choreography by Chase Brock) is the clever “The Smartphone Hour (Rich Set a Fire),” a contemporary update on the similar song, The Telephone Hour in the 1960 youth-oriented musical, Bye Bye Birdie. Possibly the best known song is “Two-Player Game,” Jeremy and Michael’s ode to friendship and game playing, included in the Salazar/Iconis cabaret seen last winter at 54 Below and recorded on the album of the same name.

Brackett’s high tech production is reflected in Beowulf Boritt’s set which has three frames, each one smaller than the next, which resemble Apple computer monitors. The floor of the stage is a schematic of a computer circuit board. Alex Basco Koch’s projection design and Tyler Micoleau’s lighting set the circuits pulsing on both the floor and on the wide frames. Bobby Frederick Tilley II’s colorful costume designs give each character a personal unique look, including the wild outfits for the second act Halloween party which goes completely off the tracks. 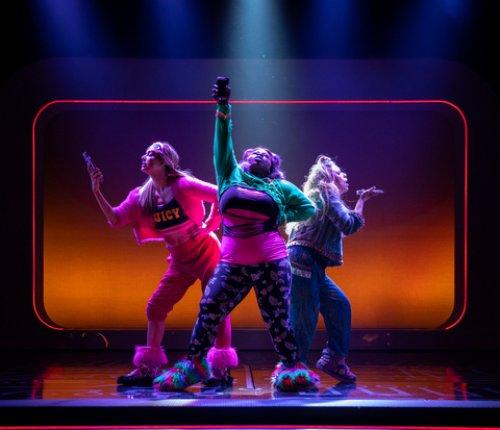 Katlyn Carlson as Chloe, Tiffany Mann as Jenna, and Lauren Marcus as Brooke in a scene from the new Broadway musical “Be More Chill” at the Lyceum Theatre (Photo credit: Maria Baranova)

The cast of ten includes five performers who appeared in the Two Rivers Theater production and are on the original cast album, and five new to their roles. Under Brackett’s deft and expert direction, all are giving three-dimensional performances.  The five actors recreating their roles seem more at ease than the others. Though he doesn’t have a great deal to do, Salazar as Jeremy’s original friend Michael makes an unforgettable impression. Stephanie Hsu makes a charming heroine as Christine but still manages to make her a strong woman with ideas of her own. Katlyn Carlson as Chloe makes her top girl without being totally mean. As her best friend Brooke, Lauren Marcus is much more poignant as the second banana who resents that classmates attempt to cozy up to her just to get to Chloe. Gerard Canonico’s Rich is sinister and confused, both a bully and a teen on the verge of a nervous breakdown.

In the leading role, Will Roland (who created the role of Jared Kleinman in Dear Evan Hansen) is fine as the nerdy kid in Act One, and after he ingests the Squip and takes off his glasses, he becomes arrogant and superior as one of the cool kids. As the school gossip who mourns that no one cares about her, Tiffany Mann gives an expansive performance as the girl who always wants to be accepted, but also shows the hurt underneath for being left out. Britton Smith’s Jake has the assurance of being the most popular guy in school, without the arrogance of such golden people. 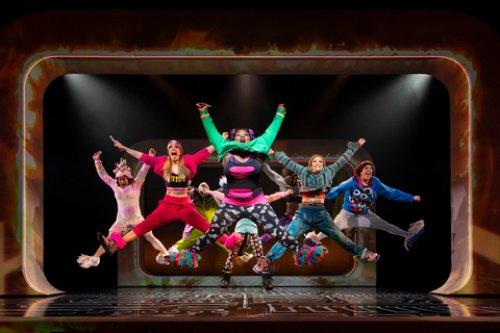 The cast of the new Broadway musical “Be More Chill” at the Lyceum Theatre (Photo credit: Maria Baranova)

Jason Tam has the unusual role of playing the Squip personified and does channel Keanu Reeves, and has deepened his voice since the Off Broadway run. Jason SweetTooth Williams who has been collaborating with Iconis for a decade makes his three roles of Jeremy’s Dad, drama director Mr. Reyes and the Scary Stockboy who is providing the community with Squips so different that you have to look at the program to realize that it is the same actor. However, in the underwritten role of Mr. Heere, Williams seems more a comic character than a real person.

Be More Chill is an impressive musical version of Ned Vizzini’s cult novel. Not only does it reproduce the plot on stage, it also gives it a high tech look that dramatizes the story where the novel left it to the imagination. Joe Iconis, long thought to be one of the most promising new theater composers, makes good on that promise, and Joe Tracz demonstrates for a second time that he can put difficult material on the stage. While Ryan Rumery’s overly loud sound design will turn off older theatergoers who are not more chill, those in the swing of things will have a memorable evening in the musical theater.