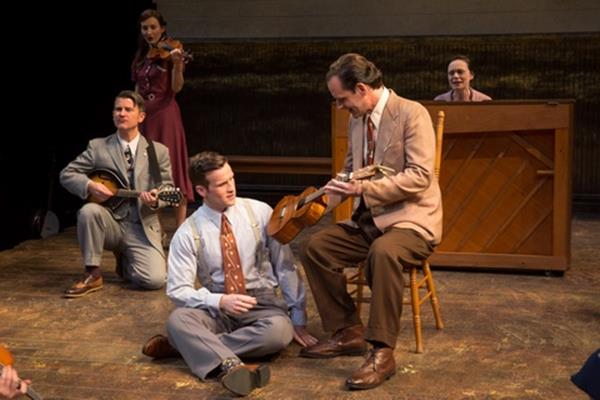 Although the 1947 Allegro, Rodgers & Hammerstein’s third musical following their megahits Oklahoma! and Carousel, has gone down in the history books as a flop, it actually ran 315 performances on Broadway, a respectable run even today. In fact, it has great historical significance: it is usually credited as the first concept musical with its Greek chorus and no sets and was a tremendous influence on the young Stephen Sondheim who was a gofer on the production. It is also the first musical to use one person as both director and choreographer, in this case Agnes de Mille who had created only the ballets for the team’s two earlier collaborations.

The book for the second act has always been considered the problem with the show implying that country life was less phony or bourgeois than city life: at the time of his death, Hammerstein was working on a revised version which remains unfinished. Aside from the 1994 City Center Encores! concert staging as part of its first season, Allegro has not had a major New York revival until now as the second installment of the Classic Stage Company’s Musical Theater Initiative. John Doyle, the Tony Award winning director who has staged revivals of Sondheim’s Sweeney Todd, Company, Passion and the New York premiere of Road Show, has edited the two act musical down to a brisk 90 minutes without intermission and reduced the cast size (rumored to have been anywhere between 65 and 150) down to ten actors who also play their own musical instruments, a technique which has become something of a Doyle trademark.

Allegro was inspired by Thornton Wilder’s Our Town which also uses no scenery and uses the actors as a chorus commenting on the action. Aside from the actors all playing stringed instruments when the show begins (as well as other instruments in the course of the show such as piano, clarinets, oboe, etc.) in Mary-Mitchell Campbell’s folksy new orchestrations, they remain on stage throughout as they both narrate and give advice to its hero Joseph Taylor, Jr. The plot delineates the life of Joe, Jr. from 1905 until his mid-life crisis at age 42. We follow Joe from birth to Dr. Joseph Taylor, Sr. and his wife Marjorie, through childhood, falling in love with neighbor Jenny, his early interest in medicine and following in his father’s footsteps, and state college. He begins his career as a small town doctor working for his father, but under his wife prodding, he relocates to a practice among the rich and well-heeled in Chicago. There he has his crisis of integrity and wishes to go back to real medicine and helping people, rather than fund raising and attending cocktail parties. 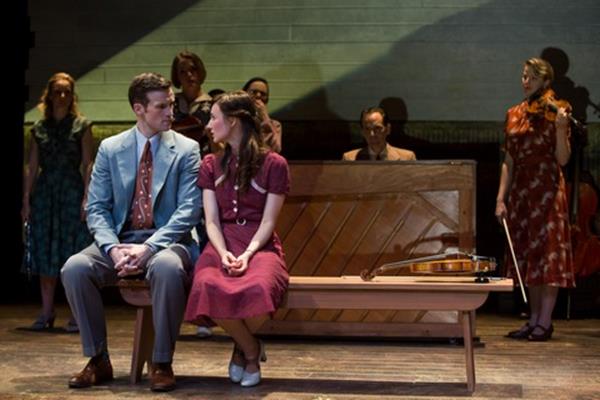 The theme (which was close to Hammerstein’s heart) was “what does it profit a man if he gains the world and loses his soul,” a message that is perennially worth stating, though the musical at the CSC seems a bit naive. Doyle has given Allegro a lovely spare production. However, in his edited version which eliminates some dialogue and minor characters as well as all of De Mille’s elaborate ballets, he has also pared the story to the bone so that at times both motivation and characterization suffer. The use of the chorus (both spoken and singing) to comment on the action works well, although at times the doubling is a little confusing. The impassioned “The Gentleman Is a Dope” remains the score’s most famous song but there are many other unfamiliar gems that ought to be better known: the lilting “A Fellow Needs A Girl,” the melodic “So Far,” the witty “Money Isn’t Everything,” and the catchy title song.

Though there are no standout performances, the cast is uniformly fine. In the central role of Joseph Taylor, Jr., Claybourne Elder is excellent as the child and young adult, a little too passive as the mature doctor. Elizabeth A. Davis, as his childhood love, gives the ambitious and social climbing Jenny a suitably hard edge. George Abud is amusing as hedonistic Charlie Townsend, Joe’s best friend from his college days. Malcolm Gets and Jessica Tyler Wright give low-key performances as Joe’s loving and understanding parents, Gets playing much of the music at the piano, center stage. Alma Cuervo makes much out of Joe’s Grandmother Taylor and later the wealthy Chicagoan, Mrs. Brook Lansdale. Jane Pfitsch as Joe’s nurse Emily gives an excellent rendition of “The Gentleman Is a Dope,” while Megan Loomis as his college date Beulah does the same with “So Far.”

The stripped-down production includes 1920’s and 30’s costumes by Ann Hould-Ward, atmospheric lighting by Jane Cox, lucid sound design by Dan Moses Schreier, lovely music direction by Campbell as well as the unobtrusive overall design by Doyle. While the CSC production does not restore Allegro to the top-drawer of the Rodgers & Hammerstein canon, it does make a case for it as a very lovely show that deserves a hearing. The rarely heard  score is a real treat as there are rumored to be almost no R & H trunk songs so that new songs are not likely to be discovered.