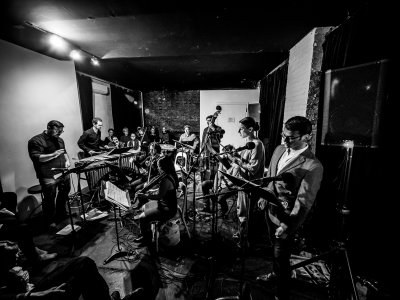 James Ilgenfritz’s Anagram Ensemble as they appeared at Experiments in Opera:  “The Travel Agency Is On Fire: Burroughs Cuts Up the Great Bards” (Photo credit: Peter Gannushkin)

As part of his creative process, American writer William J. Burroughs (1914-1997) assembled “cut-up experiments” in which he took phrases, snippets and short excerpts from the works of great writers and assembled them in an entirely new – half random, half intended – sequence to generate fresh and alternate sets of meaning. “Travel Agency Is On Fire: Burroughs Cuts Up The Great Bards” is a selection of Burroughs’ cut-ups edited and assembled by Alex Wermer-Cohen and published by Lost and Found Publications in 2014. To celebrate this recently published book, Experiments in Opera commissioned eleven composers to write short works based on particular Burroughs cut-ups to be performed by the Anagram Ensemble, a “pan-sylistic experimental”group of musicians that “integrates performance practice of improvisers with that of a new music ensemble,” directed by bassist and composer James Ilgenfritz.

The evening consisted of two sets; the first six pieces lasted from 8:00 to 9:05 PM, were then followed by a between-set break of almost an hour for last-minute rehearsals and sound checks, and the concluding five pieces lasted from 10:00 to 11:15 PM. Before each piece was performed, a pre-recorded introduction was provided. These were fairly conversational in tone; some contained useful contextual information about the piece while others were more wandering; unfortunately, these recorded introductions were often difficult to understand.

The small, utilitarian space of The Stone was packed, audience and musicians practically on top of each other; many of the composers were in the audience and between the two sets there was an atmosphere of convivial collegiality and lively friendships.

During the music, the atmosphere was one of focused intentionality, on the part of both musicians and audience. Although the styles and aesthetic vocabularies of the composers differed each from the other, they all committed to the project at hand; there was a coherent feel to the whole evening. At the center of each piece was the creation of what Ilgenfritz called “a third mind” – the “new” text of Borroughs and an author being “cut up” – and an organic hybridity that operated, in the most successful pieces, equally well intellectually and aesthetically. Writing for Experiments in Opera, the composers had a particular responsibility to this new text creation that required acknowledgment of both the foundation-author and Burroughs himself. The unifying theme of the evening was, in fact, the unanimity of the diverse composers’ commitment to the creation of “new works with innovative answers to the traditional questions about how to connect words, story and music.”

All of the composers approached the project with clear seriousness of purpose and each deserves mention. Aaron Siegel composed “on” Arthur Rimbaud, Katie Young on Jack Kerouac, Natacha Diels on Saint-John Perse, Ilgenfritz on Rimbaud, Lukas Ligeti on what was identified simply as “Poetry Anthology,” Jason Cady on J. D. Salinger, Travis Just on Shakespeare, Elliott Sharp on James Joyce, Charlie Looker on Jean Genet, Anne Guthrie on F. Scott Fitzgerald, and J. G. Thirlwell on Anthony Burgess. No doubt, every audience member had particular favorites, and all pieces were favorites to some or many. 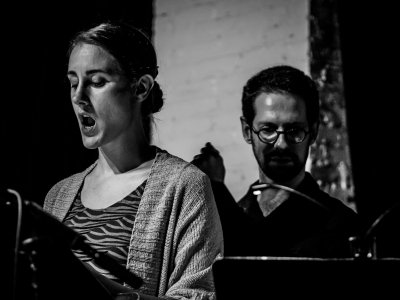 Some pieces were particularly interesting.

Young’s “read real real red” was one of the most conceptually rich pieces of the evening. Taking elements of both Kerouac and Burroughs’ irreverence and making them her own, Young made the alphabet a form of narrative: she turned its very familiarity into an expectation of beginning-middle-and-end, choosing words in letter groupings alternately fanciful and dense with meaning. The human voice – bass – was both a conveyer of sense and an instrument.

Ilgenfritz’s “I Kiss The So-called Dawn” carried the notion of the textual “third mind” into an unexpected instrument “creation.” Two singers – tenor and soprano – sang a cappella … but behind each of them stood a percussionist who thumped on the back of the singer before him. The singers’ voices were altered in timbre and carry-power; the control that singers expect and exact of themselves was constantly challenged. As Rimbaud’s texts of flight, movement, travel and decay were presented through the fracturing of Burroughs’ cutting and repositioning, so too the singers’ voices were fractured by the adaptation of their bodies into instruments, even as singing itself remained a recognizable project.

Cady set himself an unexpected project: evoking musically Burroughs’ literary cutting-up, Cady cut up his own music and explored the ways in which virtually “any complex metre can be broken down into two’s and three’s.” The result was something graciously jazzy in feel, an open-hearted, generous piece.

Sharp’s “Rebus Cog Oh Jury” was exactly three minutes long: when Sharp received his “assignment,” he believed that this was the prescribed time frame. In fact, the tight demands of setting the dense Joyce-Burroughs text proved exceptionally fruitful. Sharp called on the soprano and tenor to speed-sing Joyce’s many words; their voices carried all sorts of complex rhythms, as they presented texts sometimes in clashes, sometimes in unison. Sharp used both melody and rhythm to successfully evoke three cities of significance to Joyce and Burroughs – New York, Dublin and Tangier – and much of the piece was a scene-portrait of modern cities; its conclusion, a lyrically shaped rest from urban urgency, was lovely.

A much longer piece, Looker’s “Out of Man” used Genet-Burroughs to offer an explicit examination of violence, criminality and the vicious consequences of hypocrisy. Looker made an audacious – shaky –  claim that the grating aural ugliness of punk rock style lyrics had something like a liturgical effect, a point diminished in effectiveness by the unintelligibility of the growled words. Later in the piece, however, as the singers worked their way around several iterations of “incandescent fire,” traditional beauty – close to a nineteenth century Romantic aesthetic vocabulary – offered music that was closer than anything else in the evening to “opera” as usually understood. 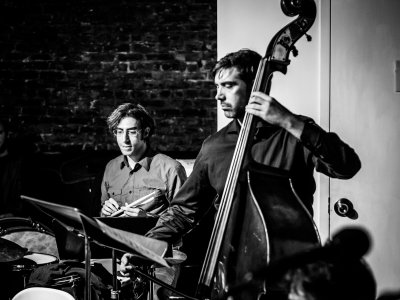 Brian Chase on drums and James Ilgenfritz on bass at Experiments in Opera:  “The Travel Agency Is On Fire: Burroughs Cuts Up the Great Bards” (Photo credit: Peter Gannushkin)

The evening’s closing piece, “The Travel Agency Is On Fire,” was exciting both in and of itself and as a first-rate conclusion to the evening. Wildness was the theme here. Rhythms were acrobatically complex; melodies were by turns enticing, truncated, jumbled and provocative. Sexy, insistent giddiness of tone made the final sonic conflagration happily inevitable.

Bass Michael Douglas Jones used the wide fullness and resonance of his voice to experiment as much with text as with the nature of his voice as instrument: much of the success of the Young piece depended on Jones’ rich embrace of the text. Soprano Amirtha Kidambi proved able to make her voice do almost anything, from pitching punkish gravel to finding the sensuous in traditional-style melodies. Individually and in duets or collaboration, these four singers presented the demanding music of the evening with evident pleasure and, together with the instrumentalists, and Nathan Koci, who conducted the Ensemble, seemed to have a genuinely good time throughout the evening.

Over the course of the eleven different pieces, certain musical features were common to several of the composers’ writing. Rhythmic explorations and experiments abounded. Unexpected sequences of ethereality, dreaminess and haunted allusions recurred frequently, reflective of the hybrid third mind in eleven different guises.

Responding with intense concentration to both the character of each individual piece and the integrity of the whole project, the audience was appropriately and happily appreciative. Taken all together, these eleven new pieces are equally witness and actor in the lively vitality of contemporary American music.

Experiments in Opera:  The Travel Agency Is On Fire: Burroughs Cuts Up the Great Bards (October 16, 2015)

The Stone, Avenue C at 2nd Street, in Manhattan

For more information: http://www.experimentsinopera.com or http://www.allmusic.com (for Anagram Ensemble).

Running time: three hours and 15 minutes including one one-hour intermission