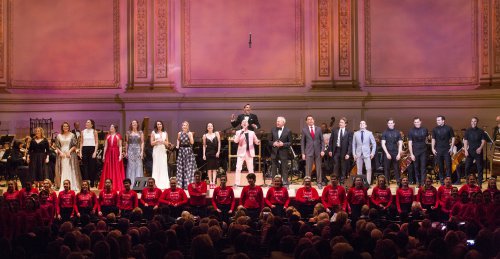 You walk into a sold-out Carnegie Hall. The New York Pops orchestra enters. The audience applauds. Not one note has been played or sung—and yet you know you’re in for the concert of the year! And true to its promise, “The New Golden Age,” the NY Pops 32nd Birthday Gala — honoring the lifelong work of brother and sister Pittsburgh natives Kathleen and Rob Marshall — was one fantastic evening on May 4, 2015.

“Leave your troubles outside! So- life is disappointing? Forget it!  We have no troubles here! In here life is beautiful- the girls are beautiful-even the orchestra, is beautiful!” elicited warm applause from the appreciative audience.

He was followed by Victor Garber reprising his 1994 performance in Damn Yankees with his role as the devil in “Those Were the Good Old Days,” (music and lyrics by Richard Adler and Jerry Ross), and clearly relishing the lyrics.

Maestro Steven Reineke, backed up by the largest pops orchestra in the United States, took us on an astonishing musical journey. The song selections made the perfectly-paced concert one of the most memorable nights of music in the past decade.

Next up was Rachel York  singing “Le Jazz Hot,” from Victor/Victoria (Henry Mancini/Leslie Bricusse) with the dancers Joshua Buscher, Max Clayton, Michaeljon Slinger, Amos Wolff and choreography by Joshua Bergasse. Styling for the dancers was by Reineke’s husband Eric Gabbard.

Nearly every moment was a highlight. Brian Stokes Mitchell lamented, “Where is the Life That I Led” from Kiss Me Kate (Cole Porter).  The Camp Broadway kids did an admirable job with “Seventy Six Trombones” from The Music Man (Meredith Willson) but while visually spectacular to see the youngsters fanned out on the stage and up the aisles acting out playing trombones, the children closest to this reviewer were merely lip-synching the song and not singing/projecting.  Too bad the excitement of performing in Carnegie Hall didn’t mean they would actually sing.

Resurrecting the magic of the evening was the stylish Laura Benanti, in a white satin and sequin evening gown, singing “Unusual Way” from Nine (Maury Yeston).  One of the hallmarks of The New York Pops is the involvement of the orchestra in the community.  Kids On Stage allows New York City middle school students the opportunity to experience the professional performance process.   Following an application and audition, 20 select students have three rehearsals with their peers, one rehearsal with Music Director Steven Reineke, and performance alongside The New York Pops musicians at this Birthday Gala performance.   This year’s orchestral performance was a robust “Themes from Pirates of the Caribbean: On Stranger Tides” (Hans Zimmer/Klaus Badelt). 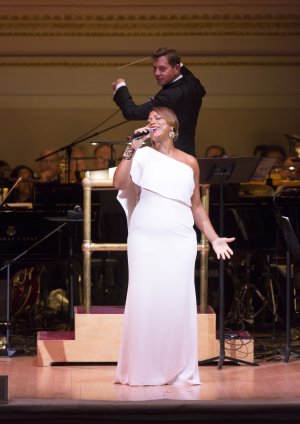 This season that culminated with this Gala could not have been as thrilling as it was without Sutton Foster who headlined the March concert.  It has just been announced that The Pops will be performing in Forest Hills Stadium this August with Sutton Foster.  So it was a fitting coda to the first act for Sutton Foster to rapturously sing the title song from Cole Porter’s Anything Goes.

Keeping the focus of the night on the recipients of the gala funds, Rob McClure and the Children of the Ronald McDonald House of New York sang, “You’re Never Fully Dressed Without a Smile,” from Annie (Charles Strouse/ Martin Charnin). Together, the Pops and Ronald McDonald House “bring musical expression to pediatric cancer patients and their siblings.”

A mesmerizing Kelli O’Hara offered up “Someone to Watch over Me” from Nice Work If You Can Get It (George Gershwin/Ira Gershwin) with her dreamy, luscious sound. It was truly a treat to hear a voice such as hers finally backed up by all those phenomenal musicians.