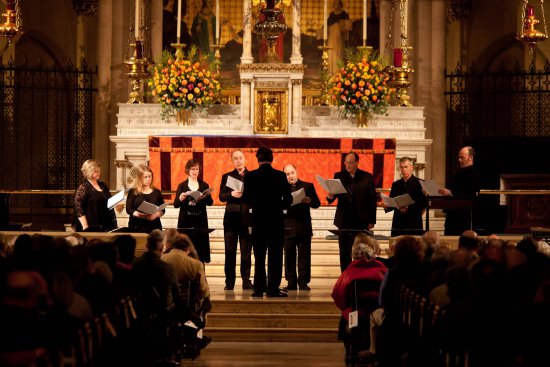 Singing at St. Mary the Virgin Church in Times Square this December, at the mid-point of an international tour that included China and Poland before the United States and then a return to England afterwards, The Tallis Scholars were in typically fine form. Under the dextrous, authoritative and even-handed leadership of founder Peter Phillips, The Tallis Scholars presented a typically elegant concert around Advent and Christmastide themes.

Once the nine singers had assembled before the main altar, Phillips stepped up to the lectern to briefly address the audience. He reported that one of the singers was suffering from a lost voice and that therefore, a program change would be necessary: the planned pieces of the first half would be replaced by a Palestrina motet and mass in honor of Mary, and the second half would proceed as indicated in the program. Phillips spoke too quickly for the particular mass (of Palestrina’s scores of masses) to be identified by name; it was simply clear that the substituted work was a Palestrina motet on a Marian theme and an accompanying parody mass.

It was a Tallis-perfect performance. Palestrina has long been one of the most sure-fire dazzling jewels in the Tallis Scholars’ treasury. In writing sacred music, Palestrina made his particular kind of beauty – elegance, intellect, decorous sensuality – a kind of theology of mediation, a meeting place for the human and the divine. The Tallis precision of diction and tone and their ability to reveal every rhythmic and melodic nuance in the music they sing make Palestrina marvelous. The bright acoustic features of St. Mary the Virgin provide a wash of light on the singing.

The music of the second half of the program presented geographical and therefore, to some extent, stylistic variety. Franco-Flemish Cipriano de Rore’s short Hodie Christus natus est was a celebratory announcement of Jesus’ birth marked by virtuosic runs and stretti. Spanish Tomás Luis de Victoria’s Magnificat Primi Toni was reflective, prayerful, and then plaintively nuanced.

Claudin de Sermisy’s Salve Regina embodied French leisure and delicacy; Hernando Franco’s treatment of the same text was more lush and sensuous reflecting both his Spanish heritage and the experimental edginess of colonial Mexico and Guatemala. The text’s imploring ‘Eja ergo … Illos tuos misericordes oculos ad nos’ was a masterful alignment of the human need for help and Mary’s own experiences of anguish at the death of her son. 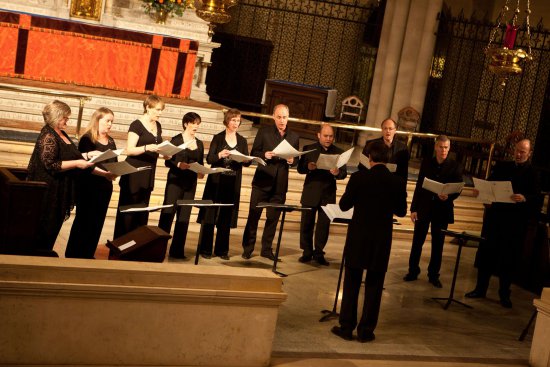 The audience – a big, Tallis loving group, packing St. Mary the Virgin practically to the sacred rafters – was delighted; applause lasted a long time and most of a standing ovation took place. For Medieval, Renaissance and early modern specialists, whether musicians or listeners, the concert was rewarding for its clarity: Palestrina could never be confused with de Rore or Franco with Taverner. Similarly, for audience members who enjoy Renaissance in a non-scholarly way, it was an evening of happy immersion in a particular and consistent cultural beauty. The Tallis Scholars have perfected a certain sound that is both admired and loved.

It is a beautiful sound. But, increasingly over the last several years, it is a peculiarly monochromatic, one-dimensional sound. Though the composers whose music The Tallis Scholars have made their own wrote with innovation and imagination, they did not include performance clues that might have guided conductors, singers or instrumentalists in thinking about emotional liberties. While claims that Tallis performances don’t include any dramatic fortissimos and remarkable pianissimos would certainly be foolishly inaccurate, the relative dynamic sameness of this performance in particular points to the one major weakness in the Tallis achievements and identity.

And like all weaknesses, the origins of this one lie in a strength: Tallis reads so meticulously and with such fidelity to scholarly transmitted manuscript detail, that no emotional liberties are taken. It seems to be a matter of principle.

The result is that The Tallis Scholars, under Phillips’ direction, present one single kind of excellence, and one alone. Aiming for excellence can be a risky enterprise, but when it’s been achieved, the risk – with its accompanying thrill – diminishes.

Church of St. Mary the Virgin