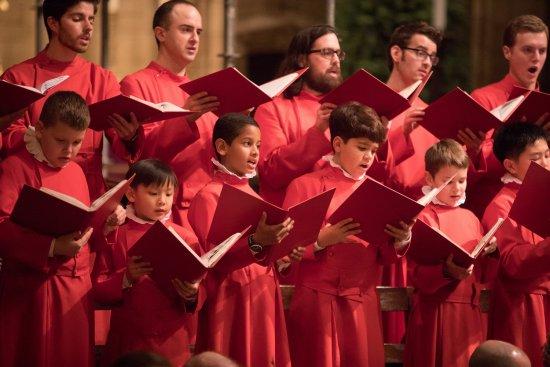 The spring concert of the St. Thomas Choir of Men and Boys – and last concert of the season – was a conclusion to the year-long exploration of the largely joyful musical theme of creation. This concert, Glory Be to Thee, O Lord: Songs of Faith, Hope and Love, featured six very different pieces by five twentieth century composers.

It was a charming choral concert. The St. Thomas Choir just can’t sing badly: the boys’ innate talent and all the singers’ superb and disciplined musical training make their singing skilled and lovely. The older boys, over the course of the academic year, have developed maturity, clarity and confidence; the two or three particularly strong sopranos are fine young musicians. The littlest boys have just about found their musical footing.

But the concert didn’t have the satisfaction of a big blockbuster – such as Haydn’s Creation, with which the season began – or of two or three masterworks. Music of the Anglican tradition is the bone and blood of St. Thomas’ work: it’s the music in which the choir excels. The formal musical curriculum in which St. Thomas students are immersed serves them well in any musical endeavor or style, but the Anglican vocabulary is the one these young musicians are most comfortable with. In this particular concert, the music of non-Anglican-tradition composers was well presented, demonstrating the skills of the singers, both young and old, but wasn’t thrilling.

The concert opened with Aaron Copland’s In the Beginning; a second Copland piece, Four Motets, was sung in the middle of the second half of the concert. Both pieces are interesting as markers on the way to the full development of Copland’s mature identity. The a cappella In the Beginning, written in 1947 as something of a choral experiment, featured the St. Thomas Choir of Men and Boys and mezzo-soprano Meg Bragle. The choir and Bragle essentially alternated in presenting narrative pieces of the opening verses of Genesis. Bragle sang beautifully: she has a supple, expressive voice and an exceptionally intelligent musicality. She sang the Genesis verses as offerings to be marveled at and was fully equal to intricate rhythmic and harmonic dialog with all sections of the entire choir.

Copland’s writing was designed to mirror a particular theological reading of the Genesis verses: the creation project wasn’t either adequate or complete until God has made “a living soul.” The unsettled though often exuberant feel of the first five days is resolved in a fortissimo proclamation of triumph on the sixth day when Man is created. Here, the boys and men sang out happily and securely.

Altogether, even with Bragle’s lovely presence, In the Beginning, though well done, was disappointing … not because of the musicians but because of the limits of Copland’s piece. Similarly, the Four Motets of the second half of the concert, because it is such a young and uncertain Copland piece – almost a gifted boy’s practice piece, something better suited for performance in some sort of Copland historical retrospective – was well done, but not exciting.

The second and third pieces of the first half of the concert were an extremely attractive pair. Eric Whitacre’s i thank You God for most this amazing day contained Whitacre’s hallmark bursts, slides and fluidity, all well matched to e. e. cummings’ poetry; the boys’ musical training is so secure that they can handle Whitacre’s surprising chords and harmonies on the way to reassuring resolutions. 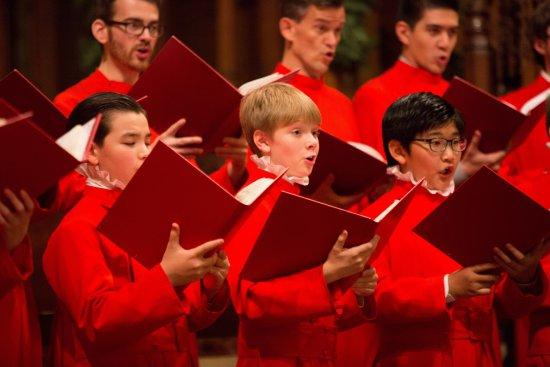 John Rutter’s Hymn to the Creator of Light brought the concert into familiar Anglican territory. The successful transition from Whitacre lay in the exaltation of a certain shimmery vocal sound that both composers favor. Hymn to the Creator of Light is a lovely work. Rutter sets his twentieth century sacred sensibility, shaped here as a tribute to Herbert Howells on the occasion of his 100th birthday, as an illumination to two hymn-like renderings of poems by seventeenth century Lancelot Andrewes (translated into English from Latin) and Johann Franck (translated into English from German). It is a lush, subtle and effective piece; the choir sang it beautifully.

The major piece of the second half of the concert was George Shearing’s Songs and Sonnets from Shakespeare. Setting songs from Shakespeare’s comedies to a rich, leisurely, largely jazz score, Shearing crafted a marvelous piece: it is inventive, sweet and witty, alternating between a sensuous cool and a gentle, show-tunes warmth. Pianist Ted Rosenthal and bass player Neil Swainson were marvelous, consummately gracious in their easy inclusion of a church choir as their vocal group.

British jazz pianist and composer George Shearing, OBE had a close association with St. Thomas Church: he was a member of the congregation. According to the Rev. Carl Turner, Rector of St. Thomas, who made welcoming remarks before the concert began, Shearing’s widow, Ellie, encouraged the choir to perform this piece. It was an interesting thought.

The poems and songs from the Shakespeare plays that Shearing chose are exquisitely multi-faceted commentaries on the evanescent vagaries of human relationships and on the daily comedies of amorous experiments. The airy pastoral atmosphere of the poems – so artfully highlighted by the worldly sophistication of Shearing’s jazz – made for a tenuous thematic connection to happy nature, and therefore to the joys of the Genesis creation story, but altogether the placement of these songs in a church was surprising. Even more loopy was the presence of double-entendre and sexy innuendo lyrics in the youngest St. Thomas boys’ serenely innocent voices.

The choir sang the Shearing delightfully … but the performance of this work in this sacred space by a boys-and-men choir in crisply formal red choir robes was its own endearing and apparently unconscious comedy.

The concert’s conclusion brought singers and audience alike back to territory that was both familiar and marvelous. Carl Rutti’s Amen, an elegant, powerful and poignant setting of the very last sentence of the Bible, was gorgeously sung. One young singer had several short solo lines. His voice was wonderfully clear: he managed both delicacy and confidence with security and grace. This is an exceptionally beautiful piece of music, capturing the interconnected certainty and mystery of the Bible’s final proclamation that God’s grace will be with us all. The choir was at its best; this was a splendid way to end the concert.

Because of the repertoire, this concert was not as spectacular as other St. Thomas Choir concerts more typically are. Nonetheless, this first season of Daniel Hyde, St. Thomas conductor, organist and director of music has been extremely successful, and next season is sure to be very fine.

Running time: 90 minutes with one intermission