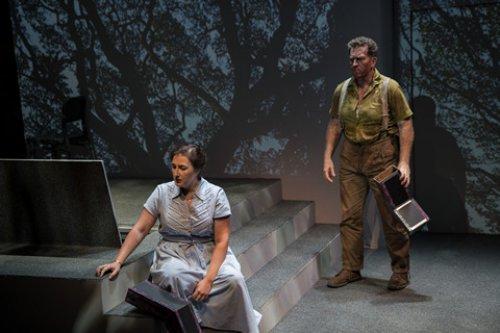 Dolores Claiborne, the first opera from a novel by Stephen King, reached New York on the occasion of the world premiere of a new chamber adaptation by composer Tobias Picker. His fifth opera and his third from contemporary literature (following Emmeline and Fantastic Mr. Fox) is being performed by the New York City Opera in the intimate Theater A of 59E59 Theaters in a version that used 14 musicians rather than the 70 that appeared in the San Francisco world premiere in 2013, and with chorus and some scenes cut, shortening the opera by approximately 30 minutes. This had obvious advantages and disadvantages.

The intimacy helps a plot that is both thriller and horror story. With a cast of only five singers (and two supernumeraries who silently play a great many other roles), the audience is almost ringside to the action. Facial expressions can be seen without opera glasses. On the other hand, as directed by Michael Capasso, NYCO’s artistic director, some of the characterizations are very flat so that this is magnified by the audience’s closeness to the stage. Picker’s Dolores Claiborne remains a solid piece of theater that seems to have missed being a masterpiece of Grand Guignol.

King’s Dolores Claiborne would seem a strange choice for dramatization as the book is a monologue told entirely by its protagonist at a police interrogation over a suspicious death on Little Tall Island off the coast of Maine. Though J.D. McClatchy’s streamlined libretto is very faithful to the book (while eliminating some characters and complications), it never approximates the compelling and wry narrative voice in Dolores’ first-person tale which makes her sympathetic and gives a sense of urgency to her story. Mezzo-soprano Lisa Chavez creates a believably passive character as a maid/companion to a selfish, rich woman whom she is accused of killing and an abused wife saddled with an alcoholic and brutal husband who died 30 years earlier but she brings no sympathy to the role. She just seems a tired, traumatized woman, not very interesting for the leading character in an opera. 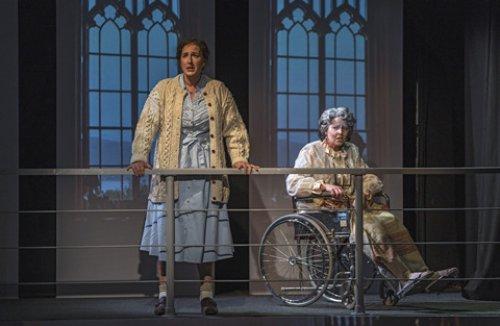 If you have read the novel or have seen the movie version, then you know all that will happen, though the ending to the opera has been made more tragic. Arrested for the murder of Vera Donovan, the woman for whom she has worked for 40 years, the widowed Dolores spends most of the time telling the story how at Vera’s suggestion she arranged to kill her abusive husband when she found he was sexually molesting their teenage daughter Selena 30 years earlier. The opera then shows in flashback Selena’s admission of what her father is doing, and Dolores’ breakdown before Vera that leads to her decision.

After Dolores describes causing Joe’s death on the day of a solar eclipse, Inspector Thibodeau reminds her that she is there to tell them about the recent death of Vera found at the bottom of her staircase. In flashback, we see her spending her time in Vera’s empty mansion catering to the whims of a lonely frightened old woman suffering from dementia. Daughter Selena, who has rejected Dolores after the death of her father, now a grown woman and a lawyer, bemoaning her lonely life as a single woman in Boston, comes to Little Tall Island to find out why she has not heard from her mother. But did Dolores commit this second murder and can she prove that she did not?

While Picker’s post-romantic music with minimal dissonances is easy on the ear, particularly with its lovely interludes between the scenes, it never conveys the Gothic horror inherent in the story. There is no sense of urgency or impending doom in a story that depicts two suspicious deaths and a sexual attack. McClatchy’s libretto which is almost entirely in prose mainly sounds like a play set to music. Except for the scenes in Vera’s mansion there is a greyness to John Farrell’s unit set and projections as digital backdrops which change the locale from the police station to Dolores and Joe’s kitchen, the ferry to the mainland, and Vera’s dining room and second floor balcony, as are Janet O’Neill’s costumes. 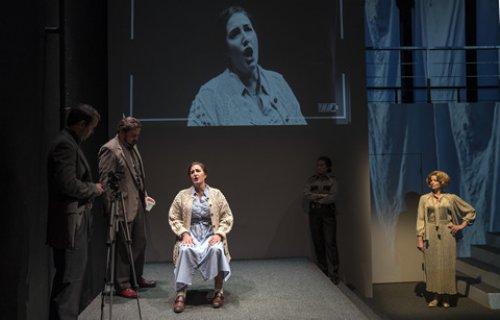 Although Chavez’s Dolores is a dour but powerful presence, most of her music sounds the same and she has few arias. It is Vera and Selena who have the most interesting roles and are allowed to change in the course of the 30 years of the story. Not only does soprano Jessica Tyler Wright’s Vera age from an imperious matron to a frightened old lady, she impresses with her aria in which she tells Dolores “That accidents are an unhappy wife’s best friend,” as well as in a sort of mad scene near the end. Soprano Lianne Gennaco’s Selena develops from troubled teen to embittered woman. She is assigned two notable arias, her ode to the stars as she witnesses the solar eclipse and her aria as she sits alone in her beautiful Boston apartment bemoaning how lonely her life has turned out.

The men aren’t given as much to do. Baritone Thomas Hall as Dolores’ alcoholic husband Joe is suitably crude and brutish, but we don’t get to see much of him. His sung nursery rhyme used to seduce Selena, “Daddy goes up, Daddy goes down, Daddy goes down the well” ought to be more sinister and disturbing. As Inspector Thibodeau, tenor Spencer Hamlin becomes a minor presence as a listener to Dolores’ story, though when he finally is allowed to come into his own as

detective turns in a rather stereotyped rendition. Conductor Pacien Mazzagatti, New York City Opera’s principal conductor, gives an excellent, well-paced account of the score with his chamber orchestra. While Michael Capasso’s production does not offer any dramatic surprises, Picker’s latest opera is still involving in a theatrical way rather than as a thriller or horror story which characterized the original material.