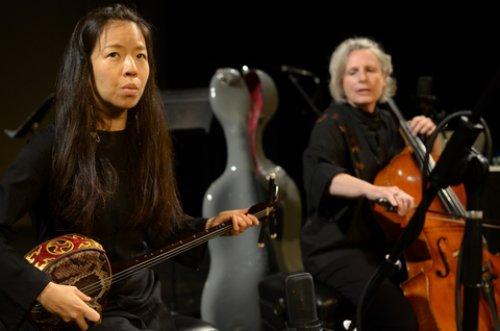 Most of the music presented in concerts 1-9, 17-18 and 20-21 of the 2018 New York City Electroacoustic Music Festival was good or very good. A few pieces were disconcertingly mediocre, characterized by sensationalism, droning repetitiveness, a desperate need for clean editing or poor execution of a potentially interesting idea; in general, these pieces felt immature or self-important.

But several pieces were entirely marvelous. Though different from each other in genre and format, all these works were marked by intellectual coherence, artistic integrity and generous humanity.

In the very first concert, one of the finest – and also longest – pieces of the Festival was Marie-Helene Bernard’s BOA Sr (1.5, i.e. Concert 1, piece 5). In 2010, Bernard read the obituary of an old woman living in the Andaman Archipelago in the Bay of Bengal; she was the last person alive to speak the Bo language, and at the end of her life, with no one left to talk to, she spoke to the birds. This fixed media requiem piece uses fragments of an anthropologist’s recordings of the old woman’s voice with electronic musical sounds. From its beginning, this work evokes the past by preserving the voices of its ghosts; humanness is stretched out into something cosmically airy. It is a mysterious and gorgeous work, a modern anthropological moment turned into a myth of simultaneous loss and eternity.

Some of the loveliest works in the Festival were in fact ones whose goal was beauty. Sue Jean Park’s Dialogue with flutist Linda Wetherill (2.6). Inspired by a poem by twentieth century Korean poet Yun Dong-Ju, Dialogue combines elegant lyricism and high drama; Wetherill played with sustained intelligence and virtuosity. Similarly beautiful was Lemon Guo and Mengtai Zhang’s Transplantation with Zhang playing an amplified Chinese flute with fixed media. Evocative wistfulness – the evocation of mystical eternities as the flute connected with recorded bells and chant – summoned by Zhang’s long notes and subtle breath work created an account of fragmentation and loss in 1949 post-revolutionary China.

Dan Schwartz’s Ambience 1D for oboe, which Schwartz played, and fixed media summoned beauty by means of introspection, questing and longing. Schwartz explores connections among the oboe and a wide variety of prerecorded sounds by manipulating sound patterns of extended oboe techniques such as “harmonics, quarter tones, false fingerings, tremolos, glissandi and mute tones.” Ambience 1D is an unexpectedly lush and romantic work.

Tsigli’i: Black-Capped Chickadee, with composer Jonathan Graybill at the piano, is part of a larger work, The Ancient Language of Birds. In Cherokee culture, the chickadee is a messenger of truth and knowledge; this piece, consisting of piano and fixed media, presents intersections of very twentieth century sounding piano music with a continuo of recorded bird song and percussion and creates a portrait of open-aired spaciousness. In this work, the natural world connects itself with both an expansive cosmos and man-made inventiveness.

The transparency of imagination at work produced particularly successful music. Aine E. Nakamura’s six stories, performed by Nakamura herself, singing and playing the sanshin, and cellist Madeleine Shapiro is a headily complex and interesting work. Accompanied by fixed media, Nakamura and Shapiro both sing and speak while playing their instruments both ‘traditionally’ and ‘non-traditionally,’ comparing experiences of Manhattan and Japan. Music and voices, in dialogue and chant, summon up images of both American and Asian worlds; the two artists, side by side, are priestesses and creators, women comparing stories and memories, two beings simultaneously separate and interconnected.

Though videos – short films of one sort or another with fixed media – are among the most difficult genres represented in this festival, there were several fine ones; of these, Sylvia Pengilly’s Sierpinsky Learns to Paint (18.5) was intellectually elegant and visually gorgeous. Pengilly explored the fractal images of 1960s Chaos Theory which developed from the work of nineteenth century mathematician Waclav Sierpinski as a way of breaking the artificial differentiation between artist and scientist. Swiftly changing abstract images – ceaselessly transforming, unexpectedly painterly geometric shapes and washes of psychedelic, kaleidoscopic colors turned into seductive sensuality – were so meticulously coordinated with complex, rich music that the video embodied coherence and integrity.

In all of these highly successful works, technology has provided tools and techniques that both expand familiar ways of making music and create new ones. But time-honored aesthetic elements of success are all in place. Each of these pieces is the fully realized presentation of an original idea; each makes itself accessible to the attentive audience; each is complete, even as it offers questions; each expands our understanding of the world we live in.

These marvelous works deserve to be heard again. This Festival was a good place for them to have their first launch; now they should enter a larger world and a bigger public.

Running time: Approximately 90 minutes with one intermission for each concert