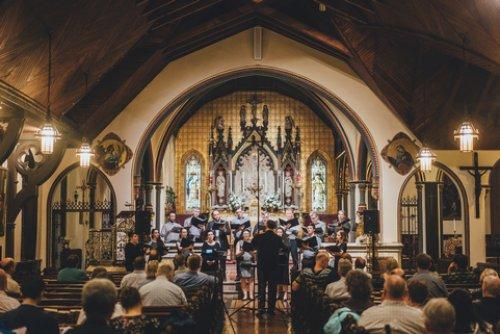 C4’s Perry Townsend conducts the ensemble at the New York Composers Circle concert at the Church of the Transfiguration on May 15, 2018 (Photo credit: Moo Jae)

In the midst of wild rains on a recent early spring evening, a small but eager, astute audience of musicians, composers and music-lovers gathered at the Church of the Transfiguration – the ‘Little Church Around the Corner’ that has nurtured and supported performing artists for almost two centuries  – for an evening of new music. All the music to be performed was composed by members of the New York Composers Circle, now in its sixteenth season.

For this concert of all choral music, the NYCC was joined by C4, New York’s remarkable composer-conductor collaborative chamber chorus; the NYCC composers were able to count on musicians who specialize in new choral works. The NYCC and C4 have consonant and overlapping missions.  Maintaining elegantly high professional standards of musical integrity, both groups support and nurture creativity in composition and performance; both have successfully cultivated loyal audiences and supporters; both explore and develop the contexts of collegiality and community within which new ideas and their creators can flourish.

Nine new works were presented in this concert, all sung by C4 and most conducted by various C4 members; about half of the works were a cappella and the others were accompanied by piano. As Hubert Howe, NYCC Executive Director and Outreach Coordinator, mentioned in his opening remarks of welcome, each work was introduced by its composer.

The first work was Timothy Lee Miller’s SAATTB a cappella Jubilate Deo, was initially commissioned by the Voces Catholici of Antwerp, Belgium (and then apparently judged ‘too sophisticated’ for liturgical use). The psalm featured lush, lovely writing, more conservative than outlandish; it was a rich and effective rendering of this joyful hymn of praise.

The next work was Frederick Boyle’s Four Prayer Songs. Boyle noted that sound “without being limited by words” is important in writing music about God. The four short movemements, Lift up a Song, Song of Deborah, Lumen Center and Rejoice, contained echoes of Boyle’s Buddhist, Christian and even Quaker spiritual quests in music that floated, embodying lightness and breath itself, in a prayerful, lovely piece.

Tamara Cashour’s Five Introits followed. Conceived for the brief, crucial and defining introductory moment of Protestant services that open the liturgy, these five extremely short works were jewels of effective musical writing: each work captured the essence of the sacred text coherently and immediately. As a Hart Longs was a paradigm of spiritual yearning; Be Strong and of Good Courage! was operatic in its noble vigor; O Sing Unto the Lord a New Song danced.

Kevin McCarter’s lovely When the Dawn, a 15-minute piece based on poems by Emily Dickinson, Wiliam Wordsworth, Edna St. Vincent Millay, Henry Wadsworth Longfellow and Sara Teasdale, presented nature’s majesties from morning to starshine. The piano accompaniment provided a tinkling contrast to the lushness of the choral sound.

After a brief intermission, the concert resumed with Richard Brooks’ marvelous Yeats Triptych, an extended consideration – in wistful and then light-hearted, ominous and then peacefully resigned meditations – of all the people and experiences an old man remembers. Brooks’ writing for Yeats’ lines is effective not so much in literal rendering as in the choral evocation of Yeats’ haunted, wise poetry.

The seventh piece of the evening was Dana Dimitri Richardson’s Remembrance for a chorus of soprano and alto singers accompanied by piano. This shimmering, rich work, though barely five minutes long, conjured up dark and powerful remembering; as women’s voices were layered on each other, memories of an “endless summer” long gone when “your white arms (were) a canopy above the world” were developed.

The second to last piece of the performance, Dary John Mizelle’s Requiem and Kyrie for full chorus, four soloists, piano and electronics (in lieu, as the composer explained, “of a 150 piece orchestra”) represented a return to ancient sacred texts like Miller’s, Boyle’s and Cashour’s. These two movements, excerpts of a large requiem mass begun in 2000 and belonging to the tradition of dramatic classical masses, are made up of difficult music, at once bracing and abrasive. The sung words of the ancient sacred text (beautifully enunciated in C4’s reliably clean singing) serve to make narrative sense of seemingly random, difficult piano and electronic music; this has the feel of a wretched death, not peacefully arrived at. The Kyrie is earthy and worldly. Even within this rough, tough music, formality and ritual prevail.

The last work of the evening was Robert S. Cohen’s Peter Quince at the Clavier for double a cappella chorus. The four sections of Wallace Stevens’ ravishing poem are divided into four movements, Andante, Adagio, Moderato ridicoloso and Larghetto. From its very opening, this work declared itself to be about beauty and creativity: the women’s voices soared. “Music is feeling, then, not sound.” The piece moved gradually from sensuous contemplation through to irony and weary wisdom and then ended in a great swell of gorgeous and celebratory affirmation. This substantive and elegant work was a splendid conclusion to the evening’s music.

The nine pieces on this program differed tremendously from each other in style, tone and effect. However, two important qualities unified all the performances. First, the composers all caused their music to emerge from their chosen texts: they did not impose sound arbitrarily unto the words. The organic coherence of word and musical sound resulted from both the composers’ innate gifts and their consummate skill. Competent choral composition is difficult; really successful choral compositions are very rare. Second, the music was superbly performed: not merely does C4 sing well, but because the C4 singers are all themselves composers, they inhabit each work’s intentions with particularly keen intelligence.

Church of the Transfiguration (The Little Church Around the Corner)