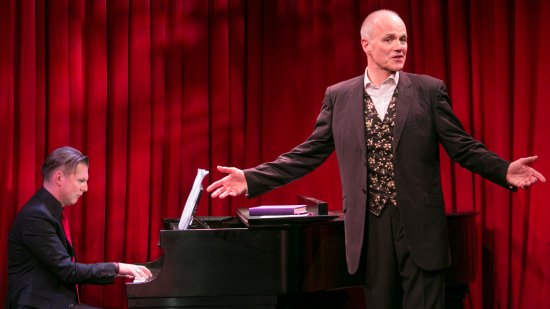 David Shrubsole (on piano) and Simon Green in a scene from “Life is for Living: Conversations with Coward” (Photo credit: Heidi Bohenkamp)

British actor/singer Simon Green’s witty fourth Christmas cabaret show at 59E59 Theaters is entitled Life is for Living: Conversations with Coward which is a bit of a misnomer. While the title comes from Noel Coward’s most celebrated play (Private Lives), there are no quotes from the other comedies. And if by conversations, you are expecting dialogues or interviews, you will find you are mistaken. However, the evening makes perfectly clear why Coward was called The Master for most of his writing and performing career.

What the show is instead is a collection of mostly unfamiliar Coward songs, verses, letters and diary entries. In addition are songs by his contemporaries, Cole Porter, Irving Berlin, George Gershwin, and that other master of British light operetta, Ivor Novello. The show is also filled out with several Coward verses set to music by Green’s regular accompanist David Shrubsole, as well as to words by Porter and Maya Angelou for which music does not exist. The material created and compiled by Green and Shrubsole, with research by Jason Morell, is droll, penetrating, wise and vastly entertaining.

The evening focuses on several themes close to Coward’s heart: love, relationships, travel, and fun and pleasure in general. It also includes childhood memories, personal reminiscence, and descriptions of friends and lovers. His warm feelings about New York and London, two of his stamping grounds, are also on his mind. There are wise pieces of advice on how to deal with creating a persona and with the price of fame. 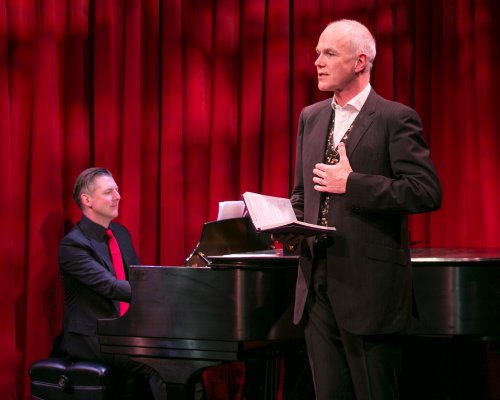 David Shrubsole (on piano) and Simon Green in a scene from “Life is for Living: Conversations with Coward” (Photo credit: Heidi Bohenkamp)

Green’s dry delivery is in the Coward manner, crisp, almost spoken to the music, with impeccable diction. Shrubsole’s accompaniment supports him without ever getting in the way. The most famous song is probably “I Went to a Marvelous Party,” and there are five songs from Coward’s last all-original Broadway musical Sail Away. However, there are also unfamiliar songs from After the Ball (“Something on a Tray”) and Pacific 1860 (“I Saw No Shadow”), London shows that never made it to Broadway. In addition is “London Pride,” recently heard in the rediscovered post-war musical, Hoi Polloi.  Stand-alone songs include the poignant “There’s No More to Say about Love” and “I Travel Alone.”

Among real rarities are verses and lyrics that have been set to music by Shrubsole very much in Coward’s style: “Honeymoon 1905,” a sweet depiction of a couple not yet used to each other or their new life, the hilarious “Co-Communists,” Coward’s devastating views on politicians with additional updated lyrics by Shrubsole, and Do I Believe?, a poignant statement of Coward’s faith. Among the most surprising and cleverest numbers are Shrubsole’s original, “Everyday a Little More Like Me,” defining the creation of Coward’s persona, and Jeremy Nicholas’ “Place Settings,” a dazzling song about an outrageous party much in The Master’s style.

Simon Green places the romantic Coward alongside of the cynical Coward for a very three-dimensional portrait. As he tells us at the beginning of the show, there may have been greater theater talents, but it would have taken 12 people to combine all of the things in which he excelled. Life Is for Living: Conversations with Coward, a sophisticated and scintillating evening of music, verse and wisdom is a fitting tribute to The Master and a delightful show for those who cherish the perfect bon mot.

Life is for Living: Conversations with Coward (through January 1, 2017)