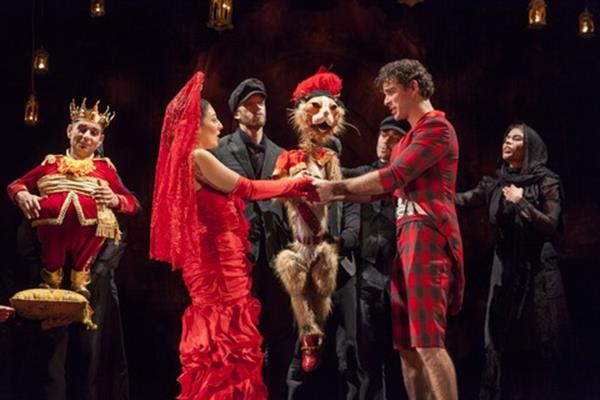 Gotham Chamber Opera whose recent productions have always seemed to catch public and journalistic attention with their interesting offerings and unusual venues has revived its 2010 hit, the 1947 chamber opera, El gato con botas, in the utterly delightful production directed by Moisés Kaufman. This winner which is great for opera lovers and novices alike, both adults and children, makes use of the Bunraku puppet wizardry of United Kingdom’s Blind Summit Theatre’s Mark Down (puppet director) and Nick Barnes (puppet design) and nine puppeteers. While Bunraku uses up to three puppeteers dressed in black per puppet, very quickly does the eye erase them and see the puppets as living characters, in addition to the puppets’ mobile faces that register many emotions.

The venue this time is the El Teatro of El Museo del Barrio, the former Heckscher Theatre with its monumental Willy Pogany murals from children’s literature including Jack and the Beanstalk, Sleeping Beauty, Cinderella, Little Red Riding Hood and Hansel and Gretel, the perfect setting for a dramatization of the fairy tale of Puss in Boots. The eclectic score by Catalan composer Xavier Montsalvatge to a libretto by Néstor Luján is at times jazzy, at times dissonant, but as conducted by Neal Goran, founding artistic director of Gotham Chamber Opera, it is always accessible. The colorful sets by Andromache Chalfant suggest the clever influence of various artists but can be enjoyed for their own sake.

Kaufman’s witty production mixes live singers with puppets who sometimes replace the actors mid-scene. The opera follows the Renaissance story of Puss in Boots. A poor Miller is disturbed to discover that the only thing he has inherited from his late father is a mangy cat named Puss. Fearing that the destitute Miller will either eat him or make a coat out of him, Puss promises his master fame, fortune and love. However, first he needs a sword, a cape, a hat and a pair of boots.

Puss’ first scheme is to capture a brace of rabbits and give them to the King as a gift from the Miller whom he calls “The Marquis of Carabas.” He also writes a love letter ostensibly from the Marquis and gives it to the romantic Princess who is immediately smitten. Next, Puss tells the Miller to jump in the river when the King and Princess are about to pass by. When Puss cries out that his master is drowning, the King orders his Chamberlain to save him and give him his clothing. Seeing the Miller in his fine new garb, the Princess falls in love with him. 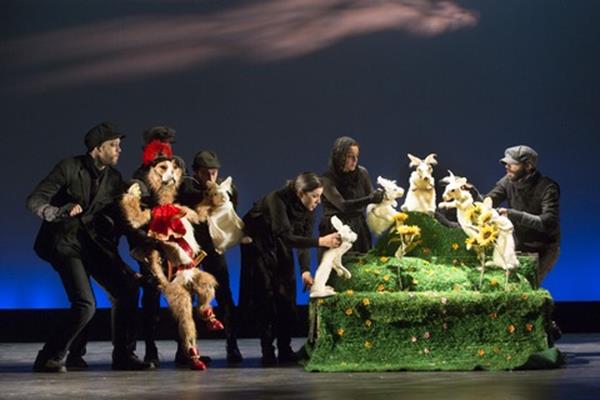 All that is needed now is a fine home for a Marquis. Puss goes to the palace of the Ogre who can change himself into different animals. Working on the Ogre’s vanity, Puss gets him to change into a lion, a bird, and finally a rat of which our intrepid cat makes short work. Puss convinces the new Marquis to propose to the Princess. The King is pleased with the match and everyone lives happily ever after with the Cat beginning with a well-deserved rest.

The cast is a witty combination of singers and puppeteers. Both the Cat (manipulated on two legs by Stefano Brancato, Jonothon Lyons and Aaron Schroeder), but sung by mezzo-soprano Ginger Costa-Jackson (alternating with Karen Mushgain) as well as the King sung by baritone Stefanos Koroneos and the Ogre sung by bass Kevin Burdette are played by puppet creations. While the Miller is drowning in the river, the voluptuous Princess strips off her costume and reveals that she is wearing a red bathing suit underneath and saves a small puppet version of the Miller. The Ogre is made up of various limbs and a head which regroup to form the lion as well. The parrot and the rat are more conventional puppets. Two of the funniest scenes are the chases with the rabbits which are at first hypnotized by Puss in the meadow, but seem to have the run of the King’s Palace once they arrive there.

While the four-foot orange and white Cat is obviously the star of the show, the opera singers hold their own against this competition. As the Miller, Craig Vern offers his resonant baritone and handsome profile. At the performance under review, mezzo-soprano Ginger Costa-Jackson, dressed entirely in black like the puppeteers, brought her lustrous voice to the singing voice of the Cat. Bass Kevin Burdette made the Ogre (also controlled by three puppeteers) a truly sinister personage. Both soprano Andrea Carroll as the Princess and baritone Stefanos Koroneos as the King brought a sense of levity to their roles. The cast is costumed by the resourceful and imaginative Clint Ramos.

Whether you regularly go to the opera or not, the Gotham Chamber Opera and Tectonic Theater Project’s co-production of El gato con botas is an enchanting theater event that will leaving you smiling. It is also an extremely clever use of multimedia sure to amaze all theatergoers. Moisés Kaufman proves himself to be an ingenious director of music theater.