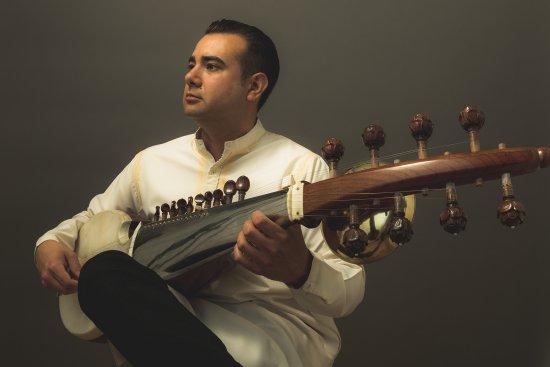 Thanking his packed audience at Le Poisson Rouge for coming to hear him play, Alam Khan described his music on this evening as a tribute to his father, Ali Akbar Khan, whose ninety-fifth birthday it would have been. But it was more than an ancestral honoring: it was a tribute to a rich centuries-old tradition of Hindustani classical music.

After an opening set by the Om Gam Ensemble, Alam Khan, playing sarode with his colleague, tabla player Nitin Mitta, presented two extended pieces, each an extended “garland of ragas,” improvised on themes written by his grandfather, Baba Allauddin Khan (1862-1972).

Each piece was a revelation, a series of overlapping and interconnected immersive celebrations in the qualities and characteristics of the moment. Khan and Mitta are both internationally known masters: they can make their ancient instruments, each capable of rich varieties of sound, into whole worlds of rhythm-patterns, notes and systems of chord relationships. When the two musicians play together, they create more than dialogue, though there is certainly a steady exchange of ideas, reflections and suggestions, and more than dance, though there’s also a ceaseless movement of interconnected rhythms and melodies that makes listeners move and bob, even when sitting quietly in their seats. What emerges from the two men’s playing is two sibling systems of musical world-description, embracing and separating, moving apart and then coming together again in unity at once dense and ephemeral.

These ragas are not narrative or linear; they are sequences of focus and musical exploration. The two extended “sets” that Khan and Mitta played weren’t narrative either, though there was in both a moment from entrance into the music, through to leisurely sequences, and then at the end, a shared near-ecstatic, breathless and stunning intensity. 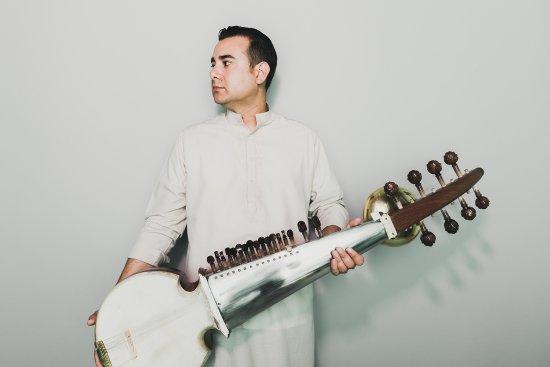 The West’s popular introduction to this music came in the Sixties, through Ravi Shankar and the sitar. Alam Khan’s grandfather, was both his father’s and Ravi Shankar’s teacher. What some might have considered a cross-cultural soundtrack for getting high was in fact something more mysterious, disciplined and historied. This formal tradition is currently being preserved not merely in the concert work of artists like Alam Khan and his colleagues but in the Ali Akbar College of Music, specializing in sarode, sitar and tabla, now in its fiftieth year in San Rafael, California, on whose faculty Khan serves.

Speaking briefly between the first and second “sets,” Khan noted that students at the college have access to almost fifteen years-worth of his father’s teaching through digitization. He reported that some lessons are even done by Fcebook and computer, musing that this modern technology is invaluable in preserving the past, while simultaneously taking away the very living quality – the insistence on the precious, unrepeatable uniqueness of the current moment – which exists at the music’s very core.

Before Khan and Mitta played, the evening began with a set by the Om Gam Ensemble, a group of musicians led by Michael Gam and associated with the Brooklyn Raga Massive, an independent not-for-profit agency and “a platform for all lovers of Raga, both listeners and practitioners, to feel the pulse of NYC’s live Indian Classical music scene.”  This group of five musicians on violin, flutes, tabla, double bass and zither harp played a series of songs that were well and happily received by the audience. The music was skilled fusion music, Indian in dominant style with a Western emphasis on ease of accessibility. Compared to the historically enracinated substance of Khan and Mitta’s music, however, Om Gam’s seemed facile and more dangerously close to the homogeneity of global popularity than to art.

The World Music Institute – with the Brooklyn Raga Massive, one of the concert’s two producers – maintains a mission of bringing the best of the world’s musical traditions to the United States. In the complexities of twenty-first century cultural globalism, tensions between appreciation of music which is indigenous, distinct and discrete on the one hand and appropriation of “foreign” elements into local familiar conventions on the other produce a full array of contradictory results. In the recent concert at Le Poisson Rouge, contradictions between historical aesthetic authority and contemporary cultural fashion were on full display.

Running time: One hour and 45 minutes with one intermission