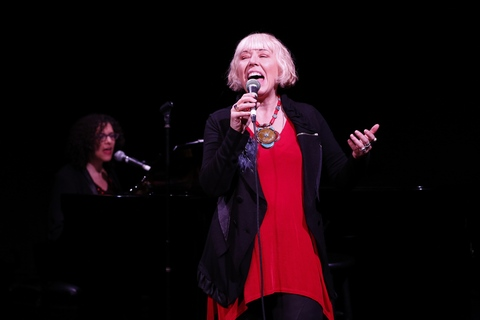 Barb Jungr filled the seats at the 59E59 Theaters with her first performance this side of the Atlantic in her new show, Hard Rain, a tribute to the legendary folk/pop artists of the ’60s, Bob Dylan and Leonard Cohen. Although not great singers themselves, both men were known for their exceptional ability to write and interpret songs. This English singer, who has a beautiful voice, is also a master at interpreting songs. In fact, she radically changes the arrangements without compromising their original intent and actually enriches the quality of the songs; she makes them sound fresh and new, bringing them into the 21st century.

Beginning with Dylan’s “It’s Alright, Ma,” Jungr sang passionately about those days, performing a dozen songs in all. She joked about them being lengthy, commenting that she intentionally picked one that is 46 verses long, and made no apology for it. Instead, she defended her choices, noting that these songs are close to her heart. In the end, it didn’t matter as she sang them all brilliantly, making you enjoy them despite their length and lackluster melodies and even if you didn’t know what they meant.

She did lighten things up a bit, though; with her dry wit and refreshing sense of humor, she had everyone laughing at her jokes in-between songs during the first half of the show. However, the second half dragged a little bit for this reviewer and, frankly, “Hard Rain” was my least favorite song, but her magnificent voice kept me engaged. At the end of “Blowin’ in the Wind,” she briefly exited the stage and this writer was left imagining the wind blowing about my face. Jungr has a very commanding stage presence and draws you in whether you understand what she is singing about or not and, let’s face it, the songs of Dylan and Cohen are complex; some of them are cynical and depressing, reflecting the unrest of the period following the age of Camelot. “Chimes of Freedom” was particularly powerful.

In Hard Rain, Jungr performs songs which capture the artists’ views on subjects involving what she calls the three “P”s: philosophical, political, and personal. These are the issues that pulled the heartstrings of Dylan and Cohen and were the driving force behind most of their lyrics written back in the tumultuous 60’s. This was the decade that bore witness to the assassinations of Dr. Martin Luther King, Jr., President John F. Kennedy, and his brother Robert F. Kennedy. It was the time that America lost her innocence, leaving many feeling disenchanted with their country and with their government, a time when they were caught up in a war with Vietnam and a draft that forced our young men to put their lives on the line whether they believed in the cause or not.

This led to the Hippie movement with its “Make love, not war” slogan, demonstrations against the government, the bringing down of the Nixon Presidency, and the emergence of journalists like Woodward and Bernstein, all culminating in a radical shift in our music that led to Woodstock and paved the way for artists like Dylan and Cohen, and much more – events that radically shaped America.

One of the most masterful and accomplished cabaret singers of our time, Jungr has a very distinct, powerful voice that grabs the attention of the audience but the songs she sang softly were the most moving. She sang each one with feeling, all the while dancing to the rhythm of the music. She is very captivating and you could not help but be caught up in the moment; she could have sung the phone book and it would have sounded good.

With the help of Tracy Stark on piano and Mike Lunoe on drums and various percussion instruments, Jungr recreated the mood of the 60’s yet made it contemporary. Even though their songs were written about the times they were living in, Dylan and Cohen’s messages were timeless and Jungr’s interpretation of them spoke to those who cared to listen to their content. When she had finished, they gave her a standing ovation. Jungr said of these artists, “Their music was so prescient; all of these songs could have been written this morning.” According to Jungr, “Both Cohen and Dylan have a visionary quality that they bring to their work, making it incredibly current. They are prophets. And isn’t that what performance is for, to give voice to their prophets, to have a communal experience that enlightens us?”

Jungr is quite striking and compelling; to look at her, you would not know that she grew up in the 1960’s. She is youthful and full of life but she announced that she herself has just turned 60. She must be proud of that and good for her; she is proof that 60 is the new 40 or maybe even 30. Jungr was born and raised in Rochdale and Stockport, England, but later moved to London where she lives today. Over the years, she has performed with some of the greatest musicians and composers the United Kingdom has to offer and has taken her shows to many countries. She has been acclaimed around the world and she is the proud recipient of two prestigious New York awards: the 2008 Nightlife Award for Outstanding Cabaret Vocalist and the 2003 Backstage Award for Best International Artist. Jungr released her Hard Rain album on her own record label in March 2014 and received four and five star reviews for both her album and her live show. The Sunday Times wrote of her, “Jungr’s attention to timbre and nuance brings new depth to every syllable.” This writer agrees. She’s a real chanteuse.

If you lived through the ’60s or feel a connection with that era, then make it a point to see this show. If you are not nostalgic about those times but would love to see cabaret at its best, then come anyway. At the very least, you will be charmed and lifted by her elegance and exquisite voice.