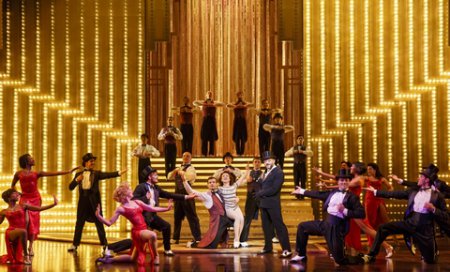 Paramour, the Cirque du Soleil’s stab at producing a Broadway style musical at the Lyric Theatre, is the circus equivalent of a jukebox musical.  Instead of songbook—Beach Boys, Four Seasons, Carole King, etc.—this show is a panoply of circus shtick:  juggling acts, trampoline chases, trapeze acts, contortionists, teeter board high fliers, etc.  Although the circus bits aren’t truly integrated into the overblown plot—a rather silly 42nd Street/A Star is Born/Red Shoes mash-up—it’s great to see the Cirque du Soleil performers in any context, but why the creators couldn’t dovetail the wonderful circus bits with an intelligent plot, is a mystery considering all the money that clearly went into Paramour.

The nightclub, supposedly a dump, is so sumptuous that it puts the Rainbow Room to shame.  Poor Indigo is besieged by acrobats and trapeze artists flying all over the place as she sings “Something More,” a title more prophetic than she knows.  To her credit, she soldiers on despite the distractions and so impresses AJ that he snatches her up and decides to give her the star treatment while inadvertently falling desperately in love with her. 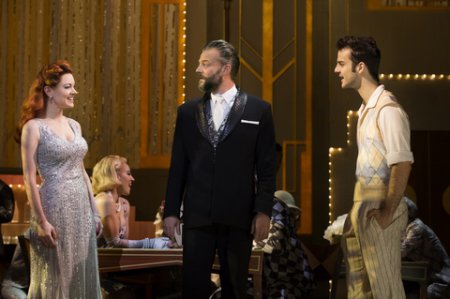 Poor Joey, hired as a lackey to write Indigo’s songs, feels left out, but hangs on and eventually wins Indigo’s love.

When she chooses love over a glamorous career, AJ is enraged.  He has filled his mind with fantasies of a big wedding and a sumptuous honeymoon.   He releases a posse of Damon Runyon-esque, zoot-suited toughs to pursue Indigo and Joey to the rooftops of Manhattan where, in one of the best scenes in Paramour, they all bounce from rooftop to rooftop to fire escapes to apartment windows, with tragic results.

In between AJ discovering Indigo and her leaving him, he films scenes of Indigo as if she were the star of a series of movie posters, most of which are from films released decades after this show supposedly takes place.  Each poster is an excuse for a circus act.  The Cleopatra poster elicits a performance by Andrew and Kevin Atherton, two hunky blonde aerial strap twins who fly daringly out over the audience and meet midair for some dazzlingly sensuous pairings.

Calamity Jane becomes a Seven Brides for Seven Brothers type contest, with dancers and acrobats jumping skillfully over constantly moving boards and flying breathlessly into the air off of teeters. 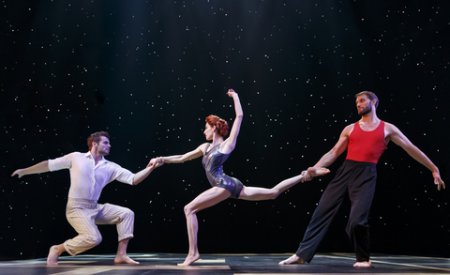 Otherwise, there is plenty of hyperactivity and overacting to watch, all of it mildly pleasant and in such a volume that no one in the audience could complain about paying Broadway prices for this show.

The songs by Bob & Bill/Guy Dubuc & Marc Lessard (music) and Andreas Carlsson (lyrics and co-composer) don’t quite come up to the standard of great pastiche, but give the performers plenty of material with which to sing and dance their hearts out. 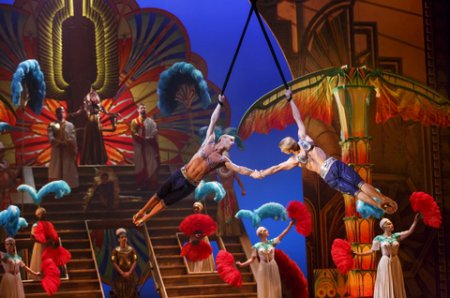 Choreographer Daphné Mauger has had to work in the shadow of the physical derring-do of the circus artists (staged by Verity Studios), but she puts her large chorus through their paces with several standing out:  Nate Cooper as a study in inspired slapstick; Zhengqi Xia, who delighted in soaring over everyone’s heads; and Reed Kelly, a reed of a fellow who made his presence known by his prowess, even with his many costume changes.

The costumes by Philippe Guillotel, sumptuous and glittery, are put to the test by a cast whose limbs always seemed to be splayed out in all directions.  The outfits are beautiful, if fanciful, approximations of the undetermined time line of the show.

Philippe Decouflé directed and conceived the show.  He hasn’t managed to make the plotline gel into a sensible, dramatic whole, but he certainly keeps the pace up with the help of the lighting designs of Patrice Besombes and Howell Binkley, the projections of Olivier Simola and Christophe Waksmann and Pierre Masse’s rigging and acrobatic equipment which had to be carefully—and safely—integrated into the scenery.