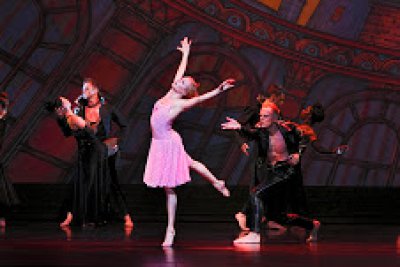 Along with changing his company’s name, Paul Taylor has decided to include other dance companies in his annual seasons at the David H. Koch Theater.  This season contained performances by the Limón Dance Company in the legendary Doris Humphrey’s “Passacaglia and Fugue in C Minor,” a masterful statement of the beauty of choreographic elegance and understatement, and Shen Wei Dance Arts in Mr. Wei’s rather tepid and passively ritualistic “Rite of Spring.”

Another bonus was the participation of the Orchestra of St. Luke’s.  Live music!  Wow!

What became clear over the course of the four performances under review were the subtle changes in Mr. Taylor’s work over the years, how his works have become less deep and more oddball.  This was a terrific way to see everything from his delightfully lovely “white” ballet, “Aureole” (1962), to his most recent opus, “Death and the Damsel,” a dark, distorted—sadistic, even—view of female sexuality. No matter what period the works come from, and no matter what one thinks of them, they are always models of craftsmanship, design and musicality. 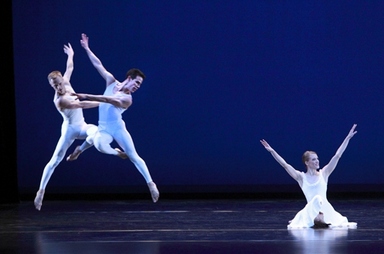 “Aureole,” to Handel is not just a pretty piece, but flirts with deeper human relationships in its two adagios.  Sean Mahoney and Christina Lynch Markham expressed in dance terms their touchingly close relationship.  This is a recurring theme in Mr. Taylor’s work.  In “Sunset,” set to Elgar, soldiers on leave go through several variations on this love/sex theme with even some hints of homosexuality in a robust duet for two of the men.  In his hot “Piazzolla Caldera,” to sensual tangos by Astor Piazzolla and Jerzy Peterburshsky, sexuality just pours off the stage, again featuring a long male/male duet.  Oddly, there is a section in which a young woman is treated with some disdain until she joins in with another female to seduce a man, an idea that is fully realized in “Death and the Damsel” to music by Martinu.  In that ballet, the woman, Jamie Rae Walker, is not just marginalized but raped, beaten and left totally alone.

Mr. Taylor reached his apogee of full emotional expression in his masterpiece “Esplanade” (J.S. Bach) which runs the gamut from happy frolicking to watching the agony of a dysfunctional family unit.  Mr. Taylor takes romantic love and transforms it into poetry in motion.  A young lady literally—and prettily—walks all over her lover and he enjoys it thoroughly, scooping her up in his arms for a wistfully slow exit.

Mr. Taylor has tended toward goofiness lately when he tries for comedy as in “Troilus and Cressida (reduced)” to Ponchielli’s famous “Dance of the Hours.”  He turns the themes of this Shakespeare play into extended baggy pants vaudeville shtick in which the leading man, the Taylor veteran, Robert Kleinendorst, literally loses his pants while battling Cupids and mock-macho Greek Invaders, all the while making love to Cressida, a beautifully sensuous Parisa Khobdeh. 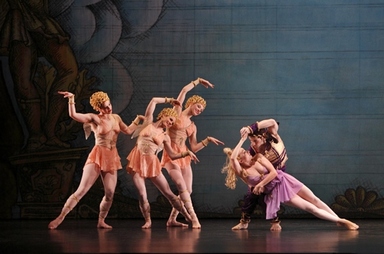 The apotheosis of Mr. Taylor’s exploration of love is his “Eventide” (Elgar).  Wearing Santo Loquasto’s pale flowing costumes and in front of Loquasto’s evocation of a surreal wood, Mr. Taylor takes five couples and delves into the varying moods of these people, from youthful exuberance to mature acceptance right on through sad break-ups.  How Mr. Taylor does this is a mystery, for his movement vocabulary is utterly simple here:  languid walks, leans, clinging duets and simple floor work.  He pulls you into their lives and makes you feel what they’re feeling.  That’s what a genius does.

Of course, his brilliant dancers and his design team contribute mightily, but it is Paul Taylor who reigns as the king of this domain, and it’s good to be the king.

For information on performances at David H. Koch Theater, call 212-496-0600 or visit http://www.davidhkochtheater.com