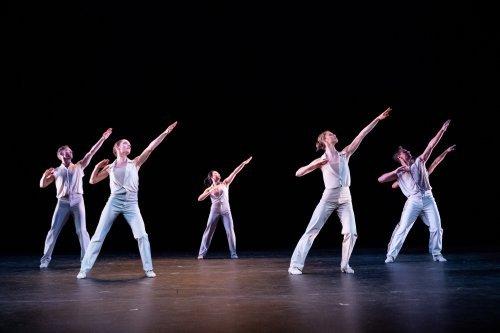 Most choreographers guard their creative secrets, refusing to speak of their inspirations and even about their lives. Not Twyla Tharp!

Her quietly wry, gently self-deprecating autobiographical lecture demonstration, “Minimalism and Me,” was the first half of a program devoted to her early works. These works more often than not caused more chin scratching than accolades.  From the virtually motionless “Tank Dive” to the giddy, if slight, “Eight Jelly Rolls,” her intellectual processes—including stacks of graph paper jottings that guided her and her dancers on stage (or on gymnasium floors, museum exhibition rooms and outdoor spaces)—were sensible yet challenging to the status quo of the 1960’s when she did her first choreographic experiments with her all-female quintet.

Of course, the mind of an artist, even one as accessible as Tharp’s is never fully knowable.  The true inner workings of an artist’s thought processes come from instinct, experience and who knows what else.  Perhaps she was influenced by Paul Taylor with whom she danced, or Merce Cunningham whose experiments in non-connectivity were all the rage in the avant-garde circles or even the brilliant artists whose loft spaces neighbored hers.  It’s all very mysterious.

The development of an artist—as seen in excerpts performed by her expert company of dancers—was sometimes difficult to discern.  How these coolly intellectually inspired movement—and non-movement—studies led to her Broadway extravaganzas and ballets that attracted star-studded  casts wanting to perform her technically challenging works—most notably Mikhail Baryshnikov—wasn’t  made clear in this program.  She began her career with the theory that “the idea equals content” and ended choreographing lush, complex works to equally lush, complex scores.

Her presentation was helped along by vintage films and photos of her early dances and the modern dance masters in whose shadow she developed her own techniques.  The only negative of these audio-visual aids was that the weighty, cool style of her original dancers wasn’t communicated on the Joyce stage.

This current company was composed of exquisitely trained artists—Matthew Dibble, Ron Todorowski, Reed Tankersley, Kara Chan, Kellie Drobnick and Mary Beth Hansohn—who smoothed out some of the rougher edges of Tharp’s movement vocabulary, yet impressed with their stage-worthiness and brilliant techniques. 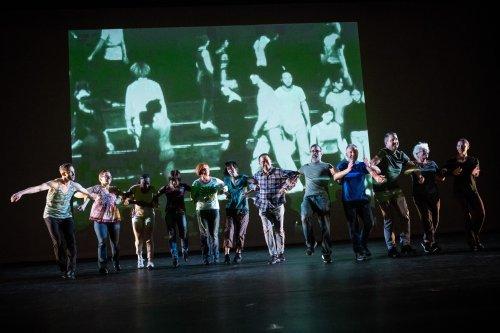 Watching the early works, a twist of the torso brought to mind a moment in her “Sinatra Suite” while the occasional stage full of dancers twitching, falling, twisting and shimmying had hints of “The Golden Section,” both big hits for Tharp.

Tharp began her lecture in front of a colorful backdrop of the Egyptian Goddess Tut whose bent over figure framed many images of hieroglyphics and ancient gods and goddesses.  The position of Tut inspired her “Tank Dive” in which she stood perfectly still in a second position, her arms held high and wide, for the duration of the song “Downtown”!

Over the subsequent years she added more movement, culminating with the cool, but frantic “The Fugue” in which three dancers established movement themes, mostly stomping, twisting and running, performing them in short canons, separated by rhythmic, tap-dance-related foot impulses that hinted at the varying speeds in which the movements spun across the stage.

Her “Dancing in the Streets of London and Paris, Continued in Stockholm and Sometimes Madrid” from 1969, brought her ideas to the general public and was danced by her troupe plus multitudes of “civilians.”  At the Joyce this staging was filled with non-dancers ineptly, but happily, performing the simple movements and stage patterns given them over the course of many rehearsals.

When she added music, she rose to a new level of creativity leaving the lure of minimalism behind her.  Her “Eight Jelly Rolls” to wonderfully sensuous period music by Jelly Roll Morton and Charles Luke, found the company members in a scrappier mood, working off each other dancing Tharp’s twisty, unpredictable movements, all the while wearing noncommittal expressions. 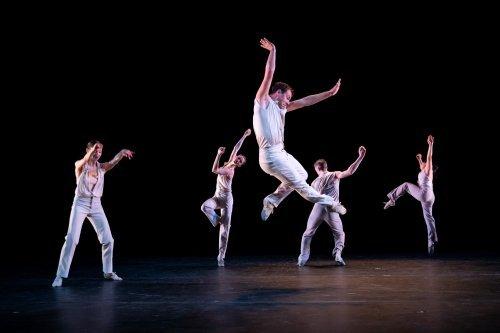 In “Eight Jelly Rolls” Tharp caught the lumbering wit of the early vintage jazz music, each of the dancers languidly moving as if guided by some inner reveries, most often filling the stage with non-connected solos.  Faster music led to soft rhythmic kicking and loose body movements inspired by social dances of the twenties, like the Charleston, Lindy Hop and Fox Trot added to Tharp’s unique non sequitur style, often making the stage images difficult to watch with so much disconnected activity going on, all of it clever, all of it superficial.

There’s always a feeling of improvisation in Tharp’s work, a feeling I call graffiti dance, full of squiggles and dashes of movement that don’t connect up in any logical or musical way.  It’s a case of style over substance.  Fortunately she’s produced a number of fine works since “Eight Jelly Rolls,” works that have more than a touch of warmth and works that even tell a story.

Master lighting designer Jennifer Tipton brought a lively ambiance to “Eight Jelly Rolls” and, along with Les Dickert, to the minimalist works.

The program ended with a short, silly, but exuberant pièce d’occasión in which Tharp, in her late seventies, wound up climbing upon a pileup of her dancers.