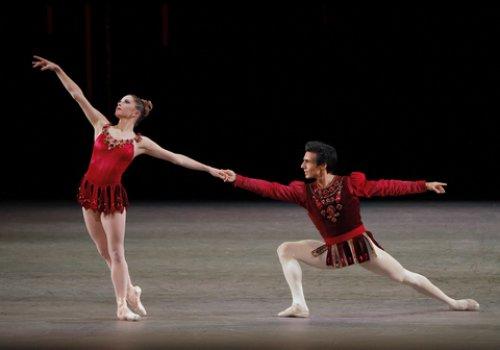 One of the rare dance events to live up to its hype, the Lincoln Center Festival presentation of George Balanchine’s full evening ballet Jewels was a scintillatingly danced production, performed by three world-class ballet troupes:  The Paris Opera Ballet, the New York City Ballet and the Bolshoi Ballet.

The three-part ballet is considered Balanchine’s tribute to the three major artistic influences in his professional life:  the French school, the Russian school and, of course, his own American style of classical ballet as taught in his School of American Ballet in Lincoln Center.  Therefore, it was not just logical, but inspired, that the Paris Opera troupe would dance the dreamy “Emeralds” to Gabriel Fauré, the New York City Ballet, the fresh and jazzy “Rubies” to Igor Stravinsky, and the Russian troupe the very classical “Diamonds” to Piotr Ilyich Tchaikovsky.

Of course, Jewels is more than a lesson in style.  It is a product of the fertile imagination of one of ballet’s greatest—arguably the greatest—choreographers.  The freshness of the steps and the corps de ballet arrangements and the incredible musicality of his work is always a revelation.  No one can tease as much out of an arabesque as Balanchine.

This production took full advantage of the qualities of each troupe:  the buttery smooth leg movements and noble poise of the French dancers; the speed and wit of the Americans; and the amplitude, exactness and space-stealing ability of the Russians.

This production utilized the original scenic designs of Peter Harvey, each emphasizing the color of the jewel.  For “Emeralds,” variations of green with loops of emeralds; for “Rubies,” shades of red and pink with rubies strung across the stage; and for “Diamonds,” numerous tilted verticals that shimmered.

Christian Lacroix designed the layered, long green costumes for “Emeralds” with the men in much-appliquéd green tunics.  The New York City Ballet used the original Karinska red costumes, short skirts of which consisted of vertical strips of cloth that amplified the movements of the legs.

Dorothée Gilbert and Hugo Marchand of the Paris Opera Ballet in a scene from “Emeralds,” part of “Jewels,” choreography by George Balanchine, © The George Balanchine Trust (Photo credit: Stephanie Berger)

“Emeralds” performed by the Paris Opera Ballet is the dreamiest of the three, featuring a lead couple (Dorothée Gilbert and Hugo Marchand), a solo couple (Léonore Baulac and Germain Louvet) and a trio (Valentine Colasante, Sae Eun Park and Marc Moreau) who later formed an ever-changing septet at the end of the ballet.  An all-female corps de ballet backed up the soloists, framing them, repeating their movement themes and leaving the stage at moments to let the leads shine, which they did, each duet as dreamy and hypnotic as the Fauré music.  The final septet was an example of Balanchine’s imaginative way of combining and recombining dancers.

The steps in “Emeralds” are beholden to the old French school with a great many reminiscent of the choreography of Bournonville, whose works are the backbone of the Royal Danish Ballet repertoire.

“Rubies” is a jaunty ballet, famous for its opening image of the corps de ballet of eight women and four men standing in a semi-circle in wide fourth positions (legs apart, one in front of the other).   Its leading couple, Megan Fairchild and Joaquin De Luz of the New York City Ballet took on all the challenges of the hip thrusting, off-balance duet with a zeal that often threatened precision, but the audience roared at their antics.  Teresa Reichlen, tall and imposing, performed the girlish “femme fatale” role, her long legs turned in, as she led the four men of the corps on a merry chase.

De Luz was particularly brilliant as he, too, led the four men about the stage, giddily prancing, running, jumping until they dispersed in explosive leaps.

“Rubies” is full of allusions to sports such as jogging and beginning variations in the same position as a runner beginning a race.  The energy never flagged. 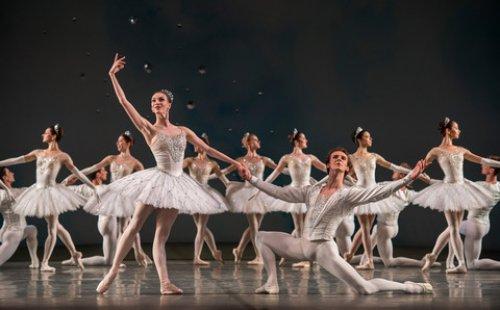 Olga Smirnova and Semyon Chudin of the Bolshoi Ballet in a scene from “Diamonds,” part of “Jewels,” choreography by George Balanchine, © The George Balanchine Trust (Photo credit: Stephanie Berger)

“Diamonds,” with its many subtle references to classical ballets like Swan Lake and Sleeping Beauty, was perfect for the Bolshoi dancers led by the elegant and passionate Olga Smirnova and Semyon Chudin as the central couple (both of whom will be appearing in this week’s Bolshoi Ballet Taming of the Shrew).  They joined four demi-soloist couples and a large corps de ballet of twenty-four (twelve men and twelve women), all wearing Elena Zaitzeva’s eye-filling classical white tutus and tunics, glittering with diamond-like gems.

The central Pas de Deux showed off Balanchine’s mastery of the duet.  Smirnova and Chudin alternately leaned against each other for loving support or stretched away from each other, making long lines that reached to the back of the Koch Theater stage.  Each subsequent quick duet by the solo couples had its own sensibility from piquant to flirtatious.  It all came together in a powerful polonaise in which the entire cast swept about the stage, creating the kind of fantasy world that only ballet can do.  It was both moving and powerful.

Andrew Litton, conducting the stylish New York City Ballet Orchestra, was attuned to every single detail of the three sections.  Nothing felt rushed or ambiguous.  This was first rate music direction.

This was, indeed a historic evening.  It is doubtful that these three giants of classical dance will ever share the stage again, let alone is such a perfect vehicle.