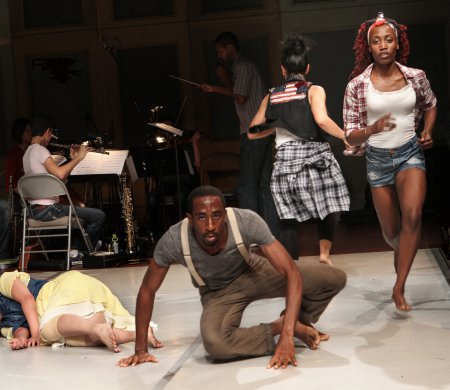 Ricarrdo Valentine in a scene from DELIRIOUS Dances’ “To Begin the World Over Again” (Photo credit: Julie Lemberger)

Edisa Weeks’ DELIRIOUS Dances company presented To Begin the World Over Again, an ultimately hopeful, informal look at American values filtered through the words of Thomas Paine, the Revolutionary War era philosopher and rebel-rouser—sort of an informal, easy-to-get-into Hamilton.

Featuring a fine score by Joseph C. Phillips, Jr., played by an expert ensemble of musicians and singers, To Begin unfolded in seven poetically titled sections shepherded by Michael Jay Henry who played a character that sat somewhere between carnival barker and dinner host.

As the audience walked in, Mr. Henry offered red, white and blue fortune cookies with quotes from Paine and noisemakers which were used later in audience participation section, an overlong competition—“Mischief Is Easier Begun Than Ended”—in which each dancer supposedly improvised a solo.  Applause (judged by Mr. Henry) decided the winner.  Pleasant as it was, this contest interrupted the flow of the work.

The performance space was bordered on three sides by audience, the fourth side occupied by the large musical ensemble.  The space in between was expansively used by the five dancers dressed in vaguely Revolutionary War era costumes (by Sarita Fellows):  Ardella Bang (small and shy), Angel Chinn (a sensuous mover), Johnnie Mercer (agile and witty), EmmaGrace Skove-Epps (soft and graceful) and Ricarrdo Valentine (tall, slender and charismatic). 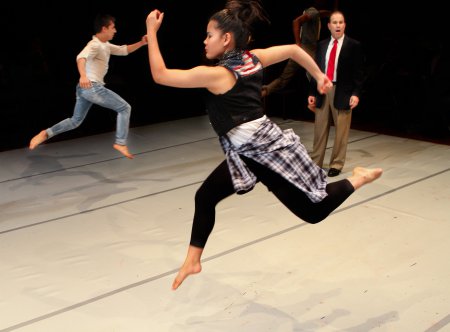 Michael Jay Henry and dancers in a scene from DELIRIOUS Dances’ “To Begin the World Over Again” (Photo credit: Julie Lemberger)

“Reel Liberty,” the opening section introduced the limited movement palette danced to a reading of “City Upon a Hill.”  (For some reason, “Reel” was the chosen spelling for this and two other section titles, rather than “real.”)  There was a two-footed forward stomp, body bent over, arms extended; a loping bent-legged jump in a loose arabesque; deep lunges with backbends; slow somersaults across the floor; distinct hand gestures about the face; and lots of running around.  These five dancers, working solo, in pairs and all together, found all the expressiveness in these movements, which somehow managed to express happiness as well as sadness as in “These Are the Times That Try Men’s Souls” which featured various lineups of dancers who variously collapsed and recovered, a simple, but effective way to express grief and tension.

An example of this simple approach was Section two, “Dreams of Wonders Undreamt” which was filled with lots of frantic variations on running.

The dancers did not shy away from direct contact with the audience, ending with “We Have It In Our Power” in which a fair share of the audience was drawn into embraces by the dancers, followed by walking with the cast members in ever expanding circles and lines while the singers kept chanting “We have it in our power to begin the world all over again.”

There was an innocent simplicity to To Begin the World Over Again, sometimes beguiling, sometimes irritating.  The dancers and musicians were committed to communicating complex political and social ideas with directness and skill helped by

Running time:  90 minutes with no intermission