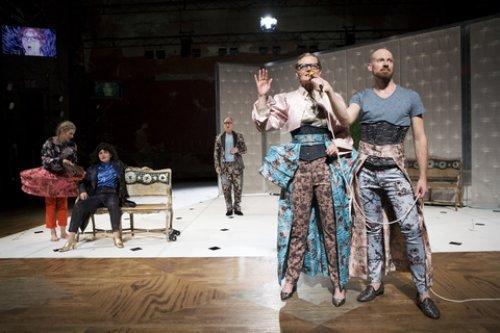 Big Dance Theater, conceived and directed by Annie-B Parson, presented 17c at the BAM Harvey Theater.  The work somehow combined the diary of Englishman, Samuel Pepys, the works of Margaret Cavendish (whose play-within-the-show—contemporary with Pepys—displayed proto-feminist ideals), classical theater (Euripides), modern writings on gender inequality (Jill Johnston who promoted a lesbian world without men) with high production standards and a keen sense of storytelling all held together by a cast of great actor/dancers.

17c obviously does not refer to a New York City apartment number but to the period in which Pepys and all the characters he refers to in his gossip-filled diary lived, the 17th century. 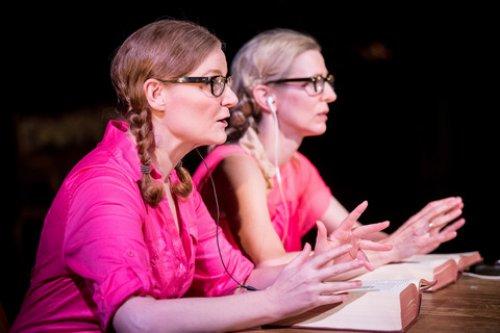 On a set designed by Joanne Howard, the white floor covered in large black diamond patterns, backed by a textured wall, 17c began with a dancer in a huge black periwig and a many layered colorful costume (evoking past centuries) reading about Pepys’ digestive and sexual issues which he wrote about quite explicitly.

Also explicit was how he mistreated his beloved wife Bess to whom he was serially unfaithful, including a dalliance with their maid.  (The costumes were by Oana Botez; wigs by David Bova; lighting by Joe Levasseur; sound design by Tei Blow; and video design by Jeff Larson—all expertly interweaving into a smart look, sometimes stark, sometimes humorous.)

Five performers—Elizabeth DeMent, Cynthia Hopkins, Paul Lazar, Aaron Mattocks and Kourtney Rutherford—alternated wittily from one century to another using a series of danced and spoken scenes, all directed by Ms. Parson and Mr. Lazar. 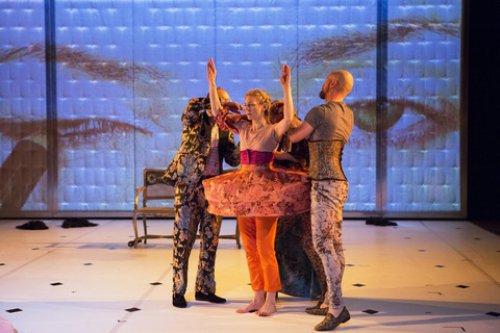 The spoken scenes—mostly monologues—alternated with light dance sequences that included sudden, unexpected jabs that unveiled darker emotions.  Whimsy, whether it was jabber or simple traveling steps, had a dark side.

A mishmash of a work that shouldn’t have worked, considering its diverse source material and purposefully choppy structure, reveals much about human frailty and gender issues.  Sadly, Annie-B Parson is telling us that we still live in a sexist, selfish world and she did it with just a sleight of hand.

Running time: one hour and ten minutes without an no intermission