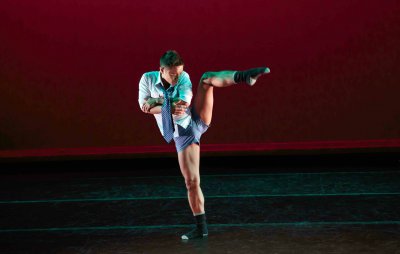 Roberto Villanueva as he appeared in a scene from “Salmagundi” (Photo credit: Eric Bandiero)

Roberto Villanueva describes BalaSole as “a diverse dance company,” and it is just that.  He provides opportunities for dance artists who would otherwise find it difficult to find artistic homes.  Villanueva, himself, is a short bundle of energy, hard to place in most companies.  Certainly, his Salmagundi at the Ailey Citigroup Theater exemplified his philosophy with a series of solos choreographed by ballet, tap, jazz and modern dancers.  The word “salmagundi” means a mixed salad, clearly a metaphor for his talented dancer/choreographers.

Two themes emerged in the ten short solos.  Most involved some sort of unsettled, unfocused angst that stimulated anguished facial and arm movements and most opened with the dancer on the floor in a bright spotlight.

The program opened and closed with “Chapter 15,” named after the anniversary year of BalaSole.  The entire company performed some unison classroom exercises to quiet tango-infused music by the Gotan Project.   They slowly peeled off into the wings, walking, lunging, posing.  Mr. Villanueva expresses awe at how well these diverse artists were able to construct such a work in the limited time they had.  He used corporate speak, calling it “a team-building exercise.”

Laura Assante’s “Cancelled Stamp” to a defiant Nina Simone song (“Love Me or Leave Me”) took a woman unrequited in love from laughter to tears, her gestures oddly framing her face.  In just a few minutes she expressed an inner insecurity.  Camille Schmoeker’s “Gilgal” was an intense tap dance with sudden stops and angular arms.  She wasn’t afraid to experiment with the form.  “Delimited Connection,” though naïve in structure, showed off Elijah Laurent’s elongated, spidery body to great effect.

Czech native Andrea Samonilova’s “MožanáJednou” (“Maybe One Day”) used a combination of spoken word (in Czech, unfortunately) and quiet chamber music (Max Richter) as the underpinning of a short study of mental anguish evidenced by sudden convulsive movements and pounding feet.  Anna Cuffari’s “Maktub,” to Disney music by Jason Swinnscoe & Dominic Peter Smith, used some interesting spins and jumps that somehow led to darker moments on the floor.  Fredrick Davis contributed “Undisputed Love” choreographed to plinkety piano music by Rudolf Werthen & I Fiamminghi.  Dressed in a neat white shirt and grey tights, he began lying in a circle of light to which he returned at the end.  He seemed to be searching for something just beyond the limits of the stage in wide, reaching movements of his arms and legs. 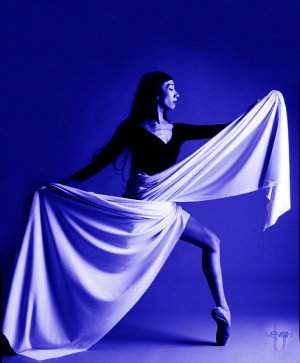 Mr. Villanueva’s solo for Alexandra Jacob, “Anástastis,” performed on point to music by Ólarfu Arnalds kept Ms. Jacob in dramatic profile for much of the time.  The swishing of her dress gave her a sassy Carmen attitude.  He also put his agile, near-naked body through “Air,” a pretty, stretchy bit showing off his extensions and command of space.

Briana Butler’s “Unstoppable” to a score by “E.S. Posthumus” was all about her muscular, tough, glaring approach to choreography, the title pretty much describing her short, gem of a solo.

Show-offy facades dominated over deep emotional expression, but there was much to admire in these ten works.   Discoveries and development happens only when artists have the opportunity to work and Mr. Villanueva’s BalaSole Dance Company provides a non-judgmental venue to try things out.  Will all these choreographers succeed?  It isn’t likely, but this kind of program is a big step in that direction.