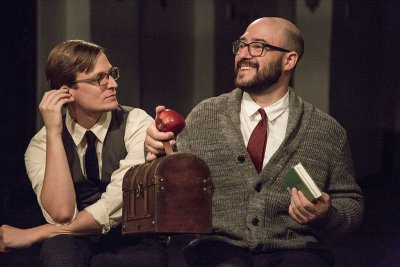 Continuing the trend of producing challenging new works of theater in interactive environments, The Representatives are back with a riveting production of Stan Richardson’s Veritas. Founded by Richardson along with Matt Steiner, the duo behind The Representatives chose to have their newest project performed at The Cave @ St. George’s, the ornately decorated basement chamber of the 300 year old St. George’s Church.

The year is 1920. Prohibition is in full effect. Set at Harvard University, Veritas (based on actual events) is the story of ten homosexual Harvard undergrads and the underground lives they led on campus to avoid either religious or legal persecution. The events lead to a gay witch-hunt which remained completely unknown until a box of handwritten transcripts was unearthed in 2000.

From the moment the doors of the theater open, the theatrical experience begins. Audience members are offered water or wine, and then escorted to their seat by an in-character actor from the production who sets the scene. At the performance under review, this writer was met by Stanley Gilkey (played by Brendan Spieth), a sophisticated undergrad with a colorful voice and a posture in-likeness of a flag waving in the wind.

The cast of ten features a diverse and talented group of men. Amir Wachterman as Ernest Roberts  provides a chilling example of the way a homosexual man may have had to live in the roaring 20’s: while at school on the campus of Harvard—away from his wife, back at home— Cummings found himself in a group of friends with similar “interests” and could pursue the lifestyle and happiness he otherwise missed.

Co-founder of The Representatives Matt Steiner is also featured in the production as Keith Smerage, one of the more innocent and naïve personalities of the evening. Besmirched by his peers, Steiner’s Smerage is victim to his own transparency and is the source of much empathy. 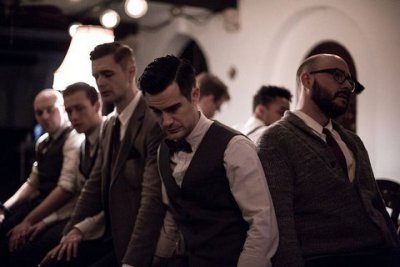 Veritas has scenes featuring anywhere from two to ten of the actors. Performed in the round, actors enter and exit from at least four different directions, and the playing space is not confined to specifically within the audience’s view. Scenes are performed behind the audience, next to it, or from inside a doorway far off from the main playing space. After a brief intermission, the entire audience and production is moved into an adjacent room for a haunting and pivotal court scene which firmly immerses the audience into the production.

The Cave @ St. George’s is an ingenious choice for the venue. The veil of religion it casts over this play rife with immorality, sexuality and libations adds a haunting edge to an already provocative subject matter. With century old electrical design, the lighting design by Paul Hudson is creative and appropriate: old oil lamps are scattered throughout the venue, there are lights hung overhead in the rafters of the church, and at times bright white lights that are set back from the playing space cast a fitting shadow on the entire production.

The 1920’s were, among many things, famous for their fashion. Ashley Walch’s costume design is meticulous, charismatic, and a huge contribution to the atmosphere surrounding the entire experience.

Co-directed by Richardson and Steiner, Veritas is deeply moving and expertly conceived. Developed with care in all aspects, the duo behind The Representatives have produced yet another impressive and stirring evening of theater which is simultaneously humorous, tragic and inspiring at any given moment.

Veritas (through November 7, 2015)
The Representatives, in association with Olmsted Salon
The Cave @ St. George’s, 209 East 16 Street in Manhattan
For tickets, visit http://www.therepresentatives.org
Running time: two hours and 20 minutes with one intermission