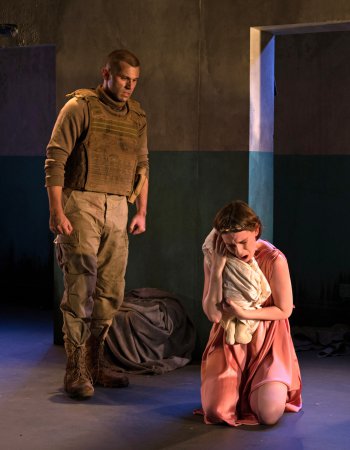 Phil Feldman as Talthybius and Casey Wortmann as Andromache in a scene from “The Trojan Women” (Photo credit: Allison Stock)

Considered the first anti-war play in western civilization, Euripides’ The Trojan Women has been translated by each generation now for over 150 years. Ellen McLaughlin’s lucid and accessible adaptation was written in 1995 in response to the Bosnian War but is first now having its New York City professional debut. Anne Cecelia Haney’s production for The Bats, the resident company of The Flea Theater, is a powerful statement of the futility of war and the effect on its innocent victims. However, while this young company gives impassioned performances, they often demonstrate their inexperience and lack of technique playing roles that are meant for older actors.

The back story of The Trojan Women concerns Prince Paris’ abduction of the Greek Helen, Queen of Sparta, to the palace of his parents King Priam and Queen Hecuba in the fabled city of Troy. In order to get her back for her husband King Menelaus, the Greeks launch a ten year siege of the city under the auspices of the goddess Athena. Employing the trick of the Wooden Horse in the tenth year, the Greeks conquer and destroy Troy. The men and children are put to death, and the women including the royal family are enslaved and apportioned to the victors as servants, slaves and concubines.

After a short prologue by Poseidon, God of the Sea, the chorus made up of Trojan women bemoans their fate that they will be dragged off to Greek city states as the price of victory. Hecuba, once Queen of Troy, now bereft of all her warrior sons, wakes and addresses the women. They are interrupted by the appearance of her daughter Cassandra, the prophetess who has been condemned to never be believed. Assigned as concubine to King Agamemnon, she has lost her mind and rejoices in the belief that she is going to her wedding with him.

Next to arrive is Helen who is accused by Hecuba of being the cause of all their problems though she defends herself as also a victim, always having been “a piece of property.” After Hecuba orders the women to take Helen away and defile her, Andromache, widow of Hecuba’s son Hector, arrives with her infant son. The Greek herald Talthybius appears to announce the doom of Hector’s son. Finally, the herald returns to announce that the ships are departing and Hecuba must leave to join Prince Odysseus on his way home to Ithaca and the other women to their assigned Greek destinations and lords. 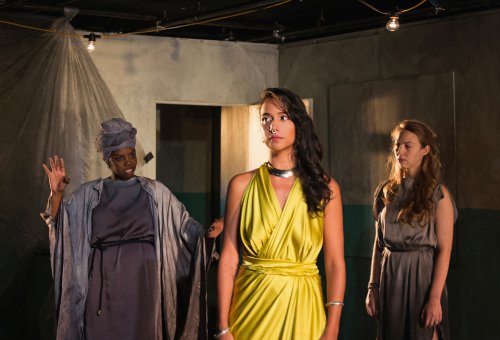 McLaughlin’s version eliminates the appearances of the goddess Athena and King Menelaus of Sparta, husband of Helen of Troy. This has the added effectiveness of focusing the play more centrally on the women victims, as the only male character is now the Greek Herald Talthybius. She has also rearranged the entrances of Cassandra, Andromache and Helen giving the Queen of Troy a second appearance, as well as the addition of having the Trojan women take out their vengeance on her as the cause of their destruction. The contemporary text by McLaughlin is direct, concise and brutal. Aside from the fact that the women have lost their families, their freedom and their homes, they lament the fact that they will not know the languages and will be laughed at, can expect to be treated as prostitutes and slaves, and will be homesick for the rest of their lives.

Though much too youthful to be playing the elder Hecuba, DeAnna Supplee is a strong, distinguished presence. As the mad Cassandra, Lindsley Howard adds a note of levity as a young woman lost in her own delusions. Casey Wortmann’s Andromache is a tragic figure, who having lost her paragon of a husband, is now condemned to lose her son. Rebeca Rad is a queenly presence as Helen, now reduced to the status of a stateless person as having lost her new home in Troy she assumes that she will be killed by her husband Menelaus when they are reunited.

Phil Feldman is sensitive and compassionate as the Greek herald Talthybius. While the six member chorus is at times one-dimensional, they are always passionate and commanding in their delivery.

While Marte Johanne Ekhougen’s scenic design basically makes use of the architecture of the The Flea’s lower level black box theater painted in split colors like a civic building, it is her costumes that draw the eye. Hecuba and the chorus of Trojan women are dressed in grey tunics. Helen looks regal in a yellow/gold gown adorned with silver jewelry. Cassandra’s mad state is reinforced by her appearing in a white bridal dress charred at the hem with twigs entwining her bodice. Andromache wears a pink tunic as she clutches her infant son in swaddling. Talthybius is dressed in a soldier’s contemporary uniform of khaki and olive drab which drives home the play’s contemporary relevance. The performance is also enhanced by the choreography for the chorus by Joya Powell, the sound design by Ben Vigus which includes eerie humming noises, and the night to dawn lighting design by Scot Gianelli.

Written in 415 B.C. as a criticism of the Athenian capture of Melos and the subjugation of its population earlier that year, The Trojan Women has remained relevant throughout the last 2,500 years due to mankind’s penchant for war. Although Ellen McLaughlin’s new adaptation makes some changes to the Euripides original, it retains its power pertinent for our own time in the wake of the refugee crisis. While at times callow, Anne Cecelia Haney’s production for The Bats is persuasive, potent and poignant. It also provides an excellent introduction to the plays that make up Greek tragedy for those who have not experienced them on stage.