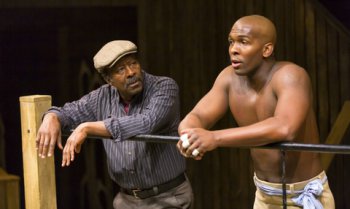 Clarke Peters and Khris Davis in a scene from “The Royale” (Photo credit: T. Charles Erickson)

On July 4, 1910, Jack Johnson, Negro Boxing Champion of the World, faced James J. Jeffries, the World Heavyweight Champion, in the boxing ring in Reno, Nevada, in the match called “The Fight of the Century.” This was the first time that an African American had faced a white boxer in the ring. The outcome led to race riots in many American cities in the Jim Crow Era.

This is the background to the powerful and riveting new drama, The Royale by Marco Ramirez, best known locally for his television writing on the acclaimed cable series, Sons of Anarchy, Orange Is the New Black, and The Walking Dead. While the Jack Johnson story has previously inspired the Pulitzer Prize-winning The Great White Hope by Howard Sackler which made a star of James Earl Jones, The Royale takes an entirely different approach and deals with different themes. The Sackler play which was also fictionalized had a cast of 59; The Royale is a chamber piece with only five actors. Directed by the tremendously talented and creative Rachel Chavkin (Natasha, Pierre & The Great Comet of 1812), the Lincoln Center Theater production now at the Mitzi E. Newhouse is a marvel of stylization and compression.

Subtitled “a play in six rounds,” The Royale is a taut, visceral drama for all of its 90 minutes. Having fought 76 bouts, Jay “The Sport” Johnson doesn’t feel he is taken seriously as he has not come up against Bixby, the white World Heavyweight Champion, who has long been in retirement. As no white boxer has ever fought a black contender in the ring, Johnson’s promoter Max doesn’t think he has a chance. However, for almost the entire purse, Bixby agrees to a match.

Just before the match, Johnson receives a visit from his estranged sister Nina who has come to remind him of the consequences of his winning against a white man in racist America in 1910. Ironically, the play has an eerie relevance to political and social events in America today. While the theme of responsibility of sports celebrity is ever present, the play also explores the theme of the fallout of African Americans reaching the top of their profession in a racist environment. 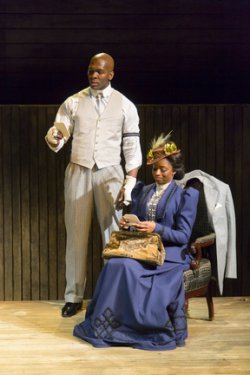 Khris Davis and Montego Glover in a scene from “The Royale” (Photo credit: T. Charles Erickson)

The staging is unusual in that no punches are thrown. When the actors are supposed to be delivering their blows, they stamp their feet which is actually more sinister and startling. The cast clap in unison to punctuate various dramatic moments. The ringside bell is live, delineating each of the six scenes, in Matt Hubbs’ sound design. During the fight scenes, the boxers face the audience and we hear what they are thinking moment by moment, rather than see their punches. Nick Vaughan’s set doubles beautifully as gym, boxing ring and locker room. During the first boxing match, ropes on a frame are moved around to give the audience different views of the ring. Austin R. Smith’s subtle lighting helps direct attention to the right spot throughout the play. All of this leads to a remarkable and memorable evening in the theater.

The cast which contains several unfamiliar faces, all of them making their Lincoln Center Theater debuts, could not be better. Making his first appearance in New York as Jay Johnson, the heroic-sized Khris Davis, in the peak of physical perfection, runs the gamut of emotions as a man who has everything but the one thing that he wants. As his trainer Wynton, Clarke Peters who has been seen in New York in King Lear and The Iceman Cometh brings a sense of authority as well as a world-weariness as a man who has seen it all. In the dual role of fight promoter and referee, John Lavelle walks a thin line as a man whose own racism comes to the forefront when he least expects it.

McKinley Belcher III as the wide-eyed and guileless 18-year-old sparring partner gives able support as an amateur boxer who may one day be a champion himself. Tony Award-nominee Montego Glover, best known for her work in musicals, playing Jay’s older sister Nina doesn’t enter the play until it is about two-thirds over, but with red-hot passion, she makes an indelible impression speaking with the voice of pragmatic reason as to the way the world really is. All are dressed in Dede M. Ayite’s realistic and period-appropriate costumes.

Marco Ramirez’s The Royale is an absorbing play which has a visceral tension both in its subject matter and presentation. Tightly written, acted and staged, The Royale is provocative and stimulating. As directed by Rachel Chavkin, it is theater you won’t soon forget. The title, another level of meaning, refers to a memory of Jay’s trainer of his first boxing match, a “battle royal” and an abuse of black men, which parallels the opening chapter in Ralph Ellison’s Invisible Man.