J.T. Rogers effectively walks a tightrope between what was fact and what was fiction in his inspired and tightly drawn drama, Oslo. With wit, finely honed dialogue, the appropriate dollop of levity, and sufficient timeline accuracy, he portrays crucial events leading up to the 1993 Oslo Peace Accords between Israel and the Palestinian Liberation Organization.

Rogers’ opening lines and stage directions immediately set up his double entendre intentions: “Laughter …. ‘It’s all true. I’m not making this up.’” In the “Playwright’s Note,” he states that “Oslo is the story of a hidden history that lies behind a public history… But to be clear, it is my version of this history.”

Despite Rogers’ hidden account, there is an overt history, where one of the most iconic images ever photographed is lurking throughout the play. The freeze-frame moment — President Bill Clinton presides over Israeli Prime Minister Yitzhak Rabin and Palestine Liberation Organization Chairman Yasser Arafat shaking hands in the White House Rose Garden on September 13th, 1993, after the signing of the Oslo Peace Accords — still resonates over two decades later. Two formerly sworn enemies, who embody the disputes between their countrymen, seal a first-time-in-history peace deal. The balance of power rests on the expectation of a handshake. Rogers’ taut backstory highlights the machinations of and “constructive ambiguities” involved in the high-level political efforts and negotiations needed to create peace in the Middle East in 1993.

In 1993, Mona Juul was an official in the Norwegian Foreign Ministry. Her husband, Terje Rød-Larsen, was founding director of the Norwegian Fafo Research Foundation which focused primarily on international peace research and Middle Eastern politics. Rogers’ play is based on extensive interviews with Juul and Rød-Larsen who brokered the back channel negotiations between Israel and the Palestinian Liberation Organization (PLO) at Borregaard Castle near Oslo, Norway.

Fortuitously, it was the director, Bartlett Sher, who brought together the meeting of minds with Juul, Rød-Larsen and Rogers. Since the Oslo Accords, Juul and Larsen had been on their own personal reconnaissance — trying to find the appropriate literary outlet and writer to tell their story. Sher’s introductions resulted in Rogers poignantly bringing to life their passion and commitment in orchestrating disparate factions coming together for peace. Rogers and Sher’s long-time relationship with Lincoln Center was readymade for Oslo coming to life. 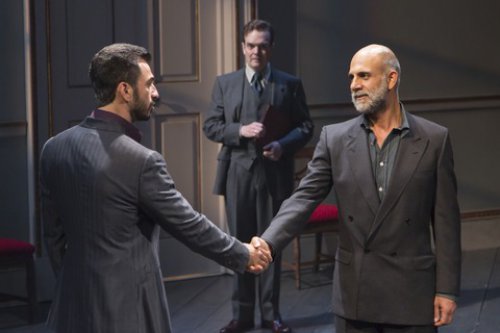 Terje opens the play, but it is Mona who is the narrator. Mona addresses the audience from time to time clarifying the complicated goings-on — who’s who, current events impinging on the negotiations and pivotal plot points. Mona is portrayed as a key player in the ever-changing musical chairs politics that unfolds. But, as in a carefully balanced husband-wife relationship, each partner has his or her own important role to play.

Sher’s ensemble casting of both major and minor roles is spot on. Jennifer Ehle gives a flawless performance as Mona Juul, a soup-to-nuts diplomat who takes charge and competently handles whatever needs to be done without bravado. Ehle completely understands the special type of graciousness and the acumen necessary that Mona needs to project to put people immediately at ease — crucial to having a room of contentious politicians work with each other. Director-General of the Israeli Foreign Ministry (Ahmed Qurie) sums up Mona’s importance by raising his glass and saying: “To Mona. Without her, we are nothing.”

Jefferson Mays as Terje Rød-Larsen is a refined dresser (costume designer Catherine Zuber is fastidious about the tailoring of his suits and shoes) with impeccable manners. He doesn’t skylark his contributions, but expertly conveys the right amount of boldness combined with narcissism in wanting to influence world events.

In fact, it is Sher’s eye for detail, in that there are no minor roles, that makes Oslo so mesmerizing — T. Ryder Smith (as Johan Jorgen Holst and Finn Grandal), Daniel Jenkins (as Jan Egeland and Ron Pundak), Henny Russell (as Marianne Heiberg, a Swedish hostess and Toril Grandal), Christopher McHale (as Thor Bjornevog and an American diplomat), Jeb Kreager (as Trond Gundersen and a German husband), Daniel Oreskes (as Shimon Peres and Yair Hirschfeld), Dariush Kashani (as Hassan Asfour), Adam Dannheisser (as Yossi Beilin), Joseph Siravo (as Joel Singer), Angela Pierce (as a German Wife), among others.

Another prominent player in the Oslo chess game is Shimon Peres. Oreskes as Peres exemplifies with aplomb his knowledge of the art and science of politics. Peres’ wing man is Yossi Beilin (Dannheisser). Dannheisser portrays Beilin as a bear of a man — aggressive and unpredictable at times, but whose growl is worse than his bite, but canny in his own way. 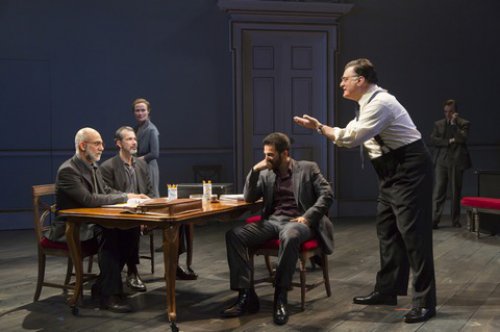 One of the most effective choices Rogers makes is foreshadowing the iconic handshake with another — an equally important one — during the first meeting of Uri Savir (an excellent Michael Aronov) and Ahmed Qurie (a marvelous Anthony Azizi). Savir (Director-General of the Israeli Foreign Ministry) attends the meeting “at the personal request and as the voice of Shimon Peres.” Qurie (Finance Minister for the PLO) is there “at the personal request and as the voice of Yasser Arafat.” Arafat’s representative extends his hand first, which Peres’ takes. Mona underlines the humanity of the moment and looks at the audience: “Two men, in a room, extend their hands and history begins to change.”

Sher complements Rogers by punctuating the play with visual puns that substantially add to the drama and importance of the enfolding events. A dinner party at Mona and Larsen’s home is disturbed by two phone calls, ringing at the same time. Larsen fields a call from Israel and Mona takes a call from the P.L.O. Phone cords or wires are crossed, as Larsen and Mona exchange mouthpieces and try to arrange meetings and facilitate a place and time for the negotiations in Norway.

The blood red cushions immediately jump out from Michael Yeargan’s sophisticated, but sparse set. The main characters sit on these crimson-colored chairs surrounded by a few pieces of antique furniture. The famed reception room, drawing room and door are painted symbolically in neutral blue-gray. Other needed environments (bar, airport waiting area, etc.) take advantage of the flexible set. Lighting designer Donald Holder constantly shifts emphasis subtly highlighting this event or that. The “door” is lit or not lit, depending on the character(s) situated in front of it or the meaning behind the situation. Characters take to the background when 59 Productions’ projections show both turning point battle scenes and important events in history. Sound designer Peter John Still helps decide what words or shouts from the crowds are distinguished in the video projections, as well as making a phone ring important.

However, the actual, classic handshake in end is anti-climactic. It is a video image on a large screen in the background, a bit out-of-focus. There is no freeze-frame or clear photograph of the Clinton, Arafat and Rabin. Perhaps this was one of the Sher’s double entendres. Did the iconic handshake really portend peace? Or, was it meant to be unclear.

Thomas Friedman encapsulated the handshake in his September 13, 1993 New York Times article: “Two hands that had written the battle orders for so many young men, two fists that had been raised in anger at one another so many times in the past, locked together for a fleeting moment of reconciliation. But much difficult work, many more compromises, will now have to be performed by these same two men to make it a lasting moment.”

At the end of Oslo, a light shines on a door half-opened, or is it half-closed?