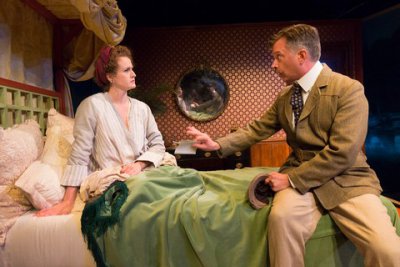 Brenda Meaney and Michael Frederic in a scene from “The New Morality” (Photo credit: Richard Termine)

When American-born Londoner Harold Chapin was killed in W.W. I in 1915, he was a highly regarded actor, stage manager and playwright, although not as famous as his colleagues George Bernard Shaw, James Barrie or John Galsworthy. While he had completed four full-length plays, his early death led to an eclipse of his work and his fame. In the centenary of his death, the Mint Theater Company well-known for uncovering lost works of merit, has revived his major comedy, The New Morality. While Jonathan Bank’s production is elegant and polished, this diverting play unfortunately seems lightweight and thin today.

Set in England’s incredibly hot summer of 1911 when temperatures reportedly reached 100, The New Morality takes place on the Jones’ houseboat, Hyacinth, on a fashionable section of the Thames. Betty Jones, wife to the recently retired Colonel Ivor, has grown tired of her husband dancing attendance on flirtatious Miriam Wister, the wife of their nearest neighbor on a houseboat called The Merry Mischief. Possibly inspired by the torrid weather, Betty has visited the Wister houseboat and insulted Miriam (never seen) to her face using “bad” language, which no one knew she knew.

The New Morality deals with the fallout from this encounter. Her dense husband does not understand what he has done wrong, believing he was only being commonly polite. Betty’s friend Alice arrives to reveal that she has heard the entire diatribe from the shore – which means it is all over the river community. Trying to placate his wife, Muriel’s husband comes on board to sheepishly demand an apology which Betty categorically refuses to deliver. In the event she does not, Wister claims he will consult his lawyer on bringing charges of criminal libel. When Betty’s brother Geoffrey, a barrister, is called for he states that anything can be considered criminal libel. Betty is firm that she is willing to go to jail for her beliefs.

Harold Chapin may be a major talent lost in W.W. I, but The New Morality doesn’t exactly demonstrate this fact. While this battle of the sexes-type comedy is filled with witticisms, it isn’t particularly witty, nor does it have many quotable one-liners. Structured in three acts, the weak middle one which repeats much of the first scene and grows tiresome suggests that two intermissions aren’t entirely necessary. The play is saved by the final act which adds delightful complications and leads to an explanation of the cryptic title. The device of our never meeting Muriel is amusing, but several of the characters are simply devices and extremely underused. Plays about the Edwardian New Woman, the fallen woman, or suffragettes tend to be dated today and not easy to identify with as a result of our changed mores.

The play is entertaining mainly because of Bank’s superb production and the cast is perfectly attuned to the Edwardian drawing room style needed. Brenda Meaney, whose only New York credit seems to be last season’s Tom Stoppard’s Indian Ink, fully embodies the heroine Betty Jones around whom the entire play revolves. Running the gamut of emotions, she not only captures the character but makes her representative of the New Woman. As her dense husband, Michael Frederic is obligingly obtuse as a man who can’t understand what he has done wrong – even though it has been all up and down the river. Ned Noyes as Muriel’s husband Wallace Wister walks off with the show with his third act drunken monologue in which he says what he could not have said any other way.

The rest of the cast appear in what are mainly cameo roles. Christian Campbell, returning to the New York stage for the first time since he played Pip in the 2008 Great Expectations brings insouciant authority to the role of the barrister brother. As Betty’s passive and conservative confidante Alice, Clemmie Evans is a charming listener. Douglas Rees as the Joneses’ longtime butler has some commanding moments. Kelly McCready as Betty’s French maid Lesceline is a study in proper behavior but despite that manages to get across her true feelings.

The production team also complements the polished acting with its elegant depiction of an Edwardian summer’s day on the Thames. Steven Kemp has devised two clever settings for the Mint’s small stage that put both the master cabin and the deck of the houseboat on stage in succession. The costumes by Carisa Kelly are redolent of Edwardian summer chic. As the day moves from 4:30 to 8 PM, Christian DeAngelis’ lighting suitably follows the clock. The lovely original music (and sound design) is the creation of Jane Shaw.

The Mint Theater continues to present elegant and sophisticated revivals of forgotten plays from the turn of the last century. Jonathan Bank’s production of The New Morality is no exception. While the comedy is certainly diverting, this does not seem to be a lost treasure like many of the plays that the Mint has uncovered.