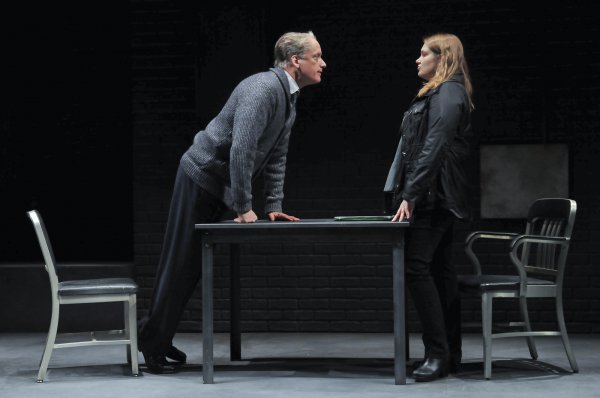 Frank Wood and Merritt Wever in a scene from the MCC Theater production of “The Nether” (Photo credit: Jenny Anderson)

As we have plays about the movies and television it was bound to happen – a new genre of plays devoted to the Internet. Jennifer Haley’s 2012 Susan Smith Blackburn Award-winning play is an eerie and disturbing cautionary tale about the Internet handled as a near-futuristic sci-fi mystery in the manner of Isaac Asimov, Ray Bradbury or Arthur C. Clarke. Although this 75 minute play continues to have revelations throughout its length, it seems a bit long once the audience guesses its secrets. Directed by Anne Kauffman who specializes in new work, The Nether has riveting performances from such actors as Tony Award-winning Frank Wood (Side Man) and Emmy Award-winning Merritt Wever (Nurse Jackie).

Like George Orwell’s 1984, another dystopian work of fiction, The Nether is set in an all grey future world, both the initial set and costumes. It is a world in which 80% of the population works online and children attend school the same way. What we know of as the Internet has evolved into the Nether, so sophisticated that some people attempt to cross over and live in this realm permanently and are referred to as shades, remaining in a catatonic state in our reality. This is partly caused by the fact that ecology has been decimated (there are no trees any more, grass is highly prized, etc.)

The seductive nature of this future Internet is made clear as soon as the play begins. We are in an investigative unit of the Nether. Detective Morris (Wever) is examining Sims (Wood), a fabulously successful businessman and the online proprietor of a shadowy website known as “The Hideaway.” Set in a beautifully appointed Victorian manor house, it is a place where pedophiles can experience a “life without consequences,” sex as well as violence. So real are the sensations that the “guests” feel that it become addictive. For proprietor and creator Sims, this is all part of “consensual roleplay.” For Detective Morris, Sims is guilty of solicitation, rape, sodomy and murder, which is the reason for her inquiry.

In order to bring Sims down, Morris has also called in a guest named Cedric Doyle (Peter Friedman), a middle-aged science teacher, a regular at the Hideaway, as well as sending a young undercover detective, Thomas Woodnut (Ben Rosenfield, Willie Thompson on Boardwalk Empire), to the Hideaway to investigate in a false character. Part of the horror that is revealed is that the regular patrons are men who are sublimating their baser instincts from breaking out in the real world. We witness both pastoral scenes at the Hideaway with pre-pubescent Iris (Sophia Anne Caruso) as well as scenes that make much clearer what is allowed to go on there. 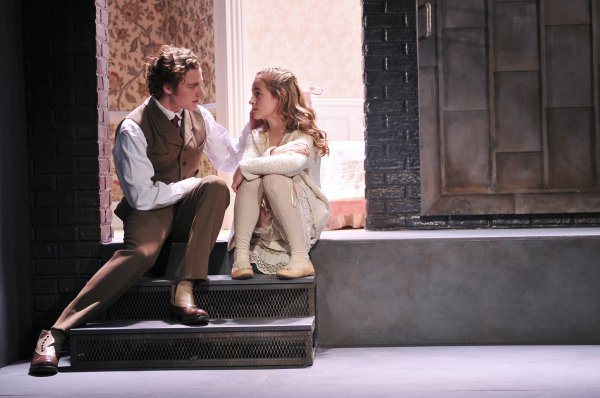 The design team is completely in tune with the content and theme of the play. Part of the experience is the extraordinary setting by Laura Jellinek. When we enter the alternate universe of the Hideway, part of the walls of the gray interrogation room disappear and we see either a corner of a pink child’s bedroom, a piece of a verdant forest, or a hallway with Victorian wallpaper. When we are back in the investigation room, there isn’t the slightest hint of the other world. Jessica Pabst’s costumes alternate between the drab monochromatic clothing for the daily life of the characters in this future world to the authentic Victorian ensembles for the denizens of the Hideaway. Ben Stanton’s lighting segues between the cold hard light of the holding room to the sunny and warm radiance of the seductive web site. Daniel Luger and Brandon Wolcott are responsible for the fine sound design and original composition.

While the play is cumulative in its shock value, it is also very schematic in its dramatic structure: investigation room, The Hideaway, investigation room, The Hideaway, etc., which becomes predictable and tiresome. While each scene has more revelations and shocks, Detective Morris’ investigation is so monomaniacal that the play eventually becomes tedious. What we see is often not what is really happening and the play circles back in on itself like a Mobius strip. Even at 75 minutes, the play feels too long as there are only so many revelations one can take – particularly as alarming and upsetting as this. Nevertheless, the play has proved controversial in its world premiere at the Center Theatre Group in Los Angeles and at the Royal Court Theater in London.

The cast is excellent at what director Kauffman has asked them to do. The problem is that the characters’ through lines are so linear that they ultimately seem one-dimensional, often a problem with science fiction and dystopian literature. Best is Wood as entrepreneur Sims, sly and slimy, as he uses every legal device in the book to counter the charges against him. He is much less mannered here than he usually is on stage. While Wever gets angrier and more incensed in each successive interview, she shows nothing other than the probing detective doing her job. However, the fact that her role seems one-note is exactly how it is written, devoid of humor or irony.

As Doyle, Friedman’s character progresses from outraged righteousness to a complete breakdown, but he also is offered little shading in this role. As the two characters whom we only see in the Hideaway, Caruso is extremely convincing as the 11-year- old girl who does not feel she is being abused and Rosenfield is totally in character as the genteel visitor to the “Victorian” age playing by all the rules as he becomes more and more addicted to its illicit pleasure.

Playwright Jennifer Haley describes her work as delving “into ethics in virtual reality and the impact of technology on our human relationships, identity and desire.” On the basis of her New York debut with The Nether, we can expect some truly frightening dramas from her in the future. Even now, The Nether is such an extreme cautionary tale of the future of the Internet, that some may have difficulty sitting through it.

MCC Theater at the Lucille Lortel Theatre, 121 Christopher Street, between Bleecker and Hudson Streets, in Manhattan

Running time: 75 minute without an intermission