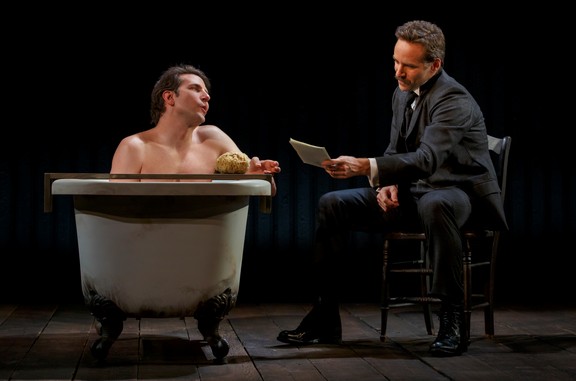 Bradley Cooper and Alessandro Nivola in a scene from “The Elephant Man” (Photo credit: Joan Marcus)

When Bradley Cooper last appeared on Broadway in the 2006 revival of Three Days of Rain, his Broadway debut was eclipsed by that of film legend Julia Roberts. Now eight years later and since his two Academy Award-nominated starring roles, he is the box office attraction in the second Broadway revival of Bernard Pomerance’s Tony Award-winning play, The Elephant Man. This 2012 Williamstown Theatre Festival production again also stars Patricia Clarkson and Alessandro Nivola, and is again directed by Scott Ellis.

Cooper would not at first seem to be ideal casting for the role of the historic and grossly deformed Merrick, nicknamed “The Elephant Man.” Unlike the thin, ethereal actors who have preceded him in this role, the muscular Cooper having gone into intense training for such movies as American Sniper and The A-Team is in the peak of condition. However, it is not entirely surprising that Cooper should have wanted so much to play John Merrick. He has said in interviews that he became fascinated with the character when he first saw the film version when he was 12. He then used scenes from the play for his audition for the Actors Studio Drama School, and later acted the entire play for his graduate thesis in 2000, where he earned an MFA. In 2012 he reprised the role at Williamstown. Why do attractive performers like playing unattractive-looking roles? Psychologists tell us they do not personally believe they are attractive and also want to be admired for their skills alone, not simply their looks.

When we first see him as Merrick, not behind a curtain, he is standing stock still facing the audience, dressed only in a 19th century briefs, without any makeup or prosthetics, like all the other stage actors who have played this role. As Dr. Frederick Treves begins describing the elephant man’s condition, the actor first clenches up his right hand and curving his right arm, then lowers his left shoulder, twists his mouth and face up into a painful expression, contorts himself and begins walking with a limp. From this moment on, he becomes the character of The Elephant Man before our very eyes. As Merrick climbs the ladder of success and fortune we see him in the three-piece suits of the well-dressed Victorian gentleman. However, Cooper never drops his character for a moment and his voice at all times sounds pinched as though he has trouble breathing, which Merrick did. 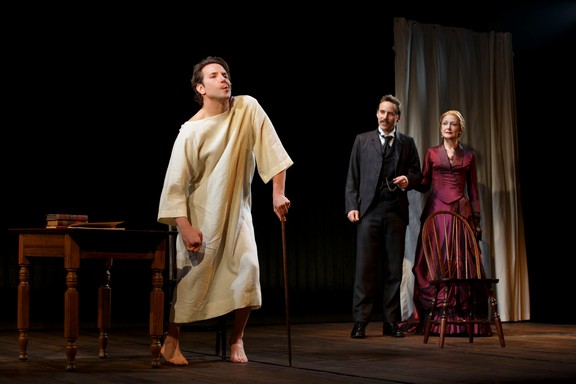 The play is told from the point of view of Frederick Treves, a fast rising surgeon and lecturer in anatomy, newly hired by London Hospital in 1884. He first meets Merrick when the unfortunate man is making his living as a carnival attraction. Later abandoned by his manager, he is again brought to Treves’ attention, and Treves arranges for him to live at London Hospital while he tries to find the causes of his deformities. Discovering how intelligent and how much like normal men Merrick wishes to be, Treves introduces him first to Bishop How and later to the famed actress Mrs. Kendal. With the Bishop, Merrick discusses questions of philosophy; from Mrs. Kendal he learns about society. When she brings her famous friends to visit him, his former manager Ross reappears and points out to him that nothing much has changed: before he displayed himself in carnivals, only now he does the same for a higher class of clientele. The dramatic climax of the play arrives when Mrs. Kendal discovers that Merrick has never seen a woman’s body and decides to do something about it.

Aside from telling an historic tale, the play examines several themes. On the one hand, it satirizes hypocritical Victorian society; on the other, it examines human nature that comes to gawk at The Elephant Man first for his deformity, and then for his tremendous social and educational improvement. Treves first teaches him that “Rules makes us happy because they are for our own good,” a very Victorian concept, which Merrick has a good deal of trouble accepting as true.Later Merrick makes him doubt this philosophy.

Each of Merrick’s visitors sees him as a reflection of themselves. For Mrs. Kendal, he is “Cheerful, honest within limits, a serious artist in his way.” For the Bishop “he is religious and devout.” For Carr Gomm, the head of the hospital, he sees Merrick as a man who is “wary of any promise, yet he fits in well. Like me.” For the Duchess, she knows that “he is discreet. Like me.” For Treves, he is “curious, compassionate, concerned about the world” – like Treves himself. The play also uses Merrick as a metaphor when he declares that “sometimes I think my head is so big because it is so full of dreams.” Additionally the play also follows the journeys of Treves and Mrs.Kendall as they come to confront their own demons. 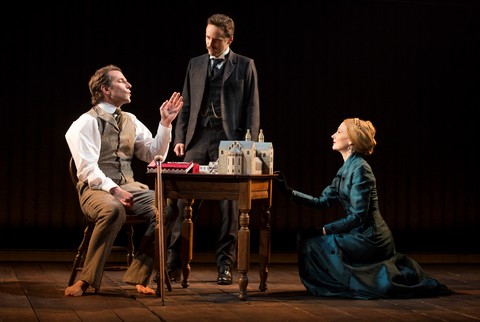 Ellis’ minimalist production of this talky, didactic play which uses drawn curtains to change the scenes and only two or three pieces of furniture moves quickly and is as genteel and refined as a drawing room drama. While Nivola is self-contained in the manner of men of science, he also is too refined for a man who eventually has his own nervous breakdown. We do not see his journey the way we are meant to. Clarkson is elegant and charming as the famous actress, but she is also glib and superficial, rather than honest and letting down her guard. Notable among the supporting cast are Henry Stram as the pragmatic and no-nonsense Carr Grom, Anthony Heald as both Bishop How and Merrick’s mercenary manager, Kathryn Meisle as an unsatisfactory nurse and the regal Princess Alexandra, and Scott Lowell as the devious Lord John and the well-meaning male nurse Snork.

Aside from Timothy R. Mackabee’s simple setting and realistic projection design, Clint Ramos’ costumes are also kept to a severe color palette. Other than the costuming, there is little atmosphere of the Victorian age. Philip S. Rosenberg uses lighting to create much needed mood. John Gromada is responsible for the appropriate original music and sound, while Charles G. LaPointe has created the 19th century-style hair and wig designs.

This third Broadway outing of Bernard Pomerance’s The Elephant Man has its strengths and its weaknesses. On the one hand, it has Bradley Cooper’s magnificent, commanding performance in the title role. On the other, Scott Ellis’ production is at times superficial when it ought to be trenchant and facile when it ought to be caustic. However, like actors in profound classic texts, the performances in this 19th century tale many deepen over time.