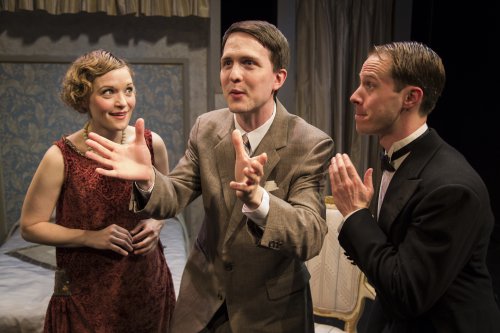 George S. Kaufman’s only solo effort, the 1925 satire, The Butter and Egg Man is a colorfully exaggerated snapshot of the nitty-gritty, seat-of-your-pants theater of a prolific decade when two men could do it all:  casting, hiring designers, booking theaters and, of course, raising the dough.  How things have changed!   It’s the money, and the chicanery involved in raising it, that animates the plot of The Butter and Egg Man.  The title, in fact, refers to the rich dilettante who can be duped into investing in a clunker, here played by a wide-eyed Ben Schnickel who makes Peter Jones a sweet guy from the sticks who finally finds a backbone and love.

Retro Productions has assembled a game cast under the direction of Ricardo Rust, all of whom enthusiastically take on these cartoony, absurdly self-involved characters with zest, if not panache.  A successful production of this kind of loony show depends on the skill of actors to play recognizable types:  the obnoxious Jewish producer, the innocent rube, the sexy showgirl, the effeminate director, etc.  Playwrights of the twenties and thirties, including the greats like Eugene O’Neill, Preston Sturges and Clifford Odets, wrote with character actors in mind.

That the actors in this show succeed as well as they do is a testament to their talents and Mr. Rust’s understanding of the period.  There are some gross exaggerations, some wavering accents and awkwardness in pacing as well as some ill-advised cutesy behavior during scene changes, but the net result is an enjoyably wacky evening in the company of likeable crazies.

Joe Lehman (a fearlessly boorish Brian Silliman) and his partner Jack McClure (a quietly intense Matthew Trumbull) are putting on a show, Her Lesson, and things aren’t going well.  The play is dreck, the star is absurdly untalented and money is in short supply.  Enter Peter Jones (Mr. Schnickel, wide-eyed and adorable) who is taken in by Joe’s spiel of glamor and cash rolling in after the show opens.  Their woefully under-paid secretary, Jane Weston (Alisha Spielmann, who finds a rainbow of emotions in a colorless role) knows what’s what and tries to protect Jack who quickly falls in love with her.

Joe’s wife, Fanny, a robust Heather E. Cunningham who almost steals the show with her snide wisecracks, serves as the giddily sardonic Greek chorus.  Shay Gines is the cluelessly flamboyant star of Her Lesson, Mary Martin (a prescient name if there ever was one!) She almost-but-not-quite gets the high-falutin’ diva style, but is always amusing. 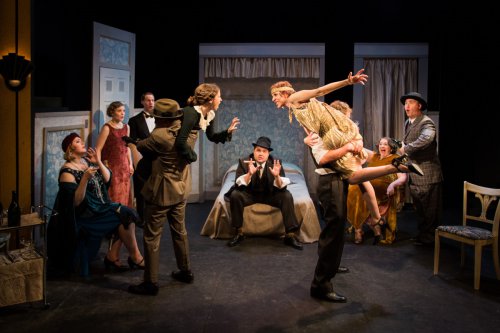 As the producing team takes the show out of town, chaos ensues.   Somehow, the show not only survives, but succeeds beyond the wildest hopes of those involved.   Jack gains total control of the show with the aid of Oscar Fritchie, the haughty, but frugal, assistant manager of the out of town hotel where the show’s staff is ensconced.  Fritchie is played by Ryan McCurdy with an accent that never quite decides if it’s English or Scottish.  McCurdy, however, is amusingly brittle.

The rest of the cast includes a waiter (C.J. Malloy), a dippy flapper with a “Noo Yawk” accent (Sarah K. Lippmann), a screechy-voiced hotel telephone operator (Rebecca Gray Davis), and an English impresario (Seth Shelden), all of whom seem to be having a great time.

The set by Jeff Stander is quite extravagant by Off-Broadway standards.  Scene changes are managed by the cast who mug and prance in an unnecessarily distracting manner as they revolve walls and carry in furniture.  Viviane Galloway’s costumes are equally elaborate with great attention to detail and character.  The Butter and Egg Man at the Gene Frankel Theatre has the exuberance of a first rate summer stock production.  It is a delightful portrait of a simpler time on Broadway.

Running time: two hour and 15 minutes including one intermission