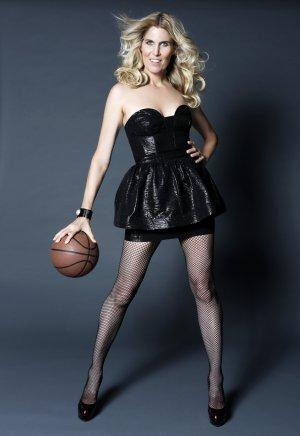 Terri Mateer in a scene from “A Kind Shot” (Photo credit: James Hollywood)

Anyone doing a one-person, autobiographical show better have a story to tell. Otherwise, it can get pretty awkward on that lonely stage, as the audience stares back at you with bored, pitying eyes. In A Kind Shot, former pro basketball player Terri Mateer meets the minimum requirement for monologuing her life by having lived an interesting one. She also does a decent job of shaping her highs and lows into a narrative arc that holds the audience’s attention, bouncing between tragedy and triumph until, finally, we arrive back in the present, for some heartfelt advice about what people should be willing to do for each other to mitigate the former.

Of course, there is pain beyond anyone’s control, as when Mateer tells us about losing her father, a Phantom Jet pilot for the Navy, when she was four years for age. Her mother, on the decidedly looser side of the adult behavioral spectrum, didn’t double down on the parental guidance; instead, when Mateer hit the milestone of second grade, mom taught her how to roll and smoke a joint.

Most of Mateer’s personal history, or at least the part she reveals to us, revolves around seeking proper mentors, only to be disappointed or worse. There are exceptions, like Marynell Meadors, the Florida State University basketball coach who finally gave the 6’1” Mateer the playing opportunity, and scholarship, she so desperately wanted. But, for the most part, the people who offer to help Mateer also end up betraying her, especially the men in her life. And, sadly, this betrayal does occasionally include sexual abuse.

Terri Mateer in a scene from “A Kind Shot” (Photo credit: James Hollywood)

Mateer, though, always overcomes and moves forward. She plays basketball professionally in France, launches a modelling career, puts her undergraduate degree to use as a furniture designer, starts acting, and writes a show about everything she’s done, learned, and endured. It’s all very inspirational.

And that’s essentially the problem with A Kind Shot. Clocking in at 75 minutes, the “performance” feels more like a motivational speech than a theatrical event. It’s well-meaning and well-told, but other than the charismatic Mateer, there isn’t much else to it. The set, a masking tape outline of a shrunken basketball key, accomplishes so little visually that it begs the question, “Why bother at all?” Mateer completes the obvious motif with a flower-emblazoned basketball, which she dribbles around a bit and bangs off the wall as if she’s making shots. I’m all for audience imagination, but, come on, just hang up a basketball hoop.

As for sound and lighting design, here’s what I can report: some forgettable music plays before Mateer emerges from a side door, and, after she does, we can always see her standing in front of us. That’s about it, which is too bad, because Mateer has the beginnings of a good show. Unfortunately, right now, that’s all she has.

Running time: one hour and fifteen minutes with no intermission