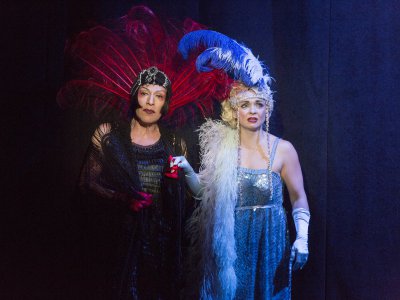 A tribute to the 100th anniversary of the theater originally called The Neighborhood Playhouse, MacArthur fellow and puppeteer extraordinaire Basil Twist has created a dazzling “spooktacular musical extravaganza” called Sisters’ Follies: Between Two Worlds. Now known as part of the Henry Street Settlement’s Abrons Arts Center, the building was built in 1915 by two creative and philanthropic sisters Alice and Irene Lewisohn who produced avant-garde theater and dance until 1928. The show is both a celebration and a satire of their lives and careers. The title is a pun referring to the fact that the sisters come back from the dead, as well as recalling their extravagant productions which became legendary.

With a cast led by downtown icons Joey Arias and Julie Atlas Muz, Sisters’ Follies includes life size puppets, flying ghosts, music and dance, topless performances, talking masks, and spectacular recreations of their most famous productions. When we first meet them, they are ghosts flying about the stage in long white diaphanous gowns glad to be back in their theater. They then sing a duet of Irving Berlin’s “Sisters” with appropriately new ribald lyrics. From their clever banter, we discover that Alice (Arias) was an actress and Irene (Muz) a dancer who were continually warring over everything from billing to which of them received more flowers to their legacies. Self-centered Alice, the older sister, is always cool and collected while Irene, who worships her even though she always seems to get the short end of the stick, is more passionate and temperamental. Today Irene is remembered as having founded the Costume Institute of the Metropolitan Museum of Art, while the acting school they both founded, The Neighborhood Playhouse School of the Theatre, is also very much alive. 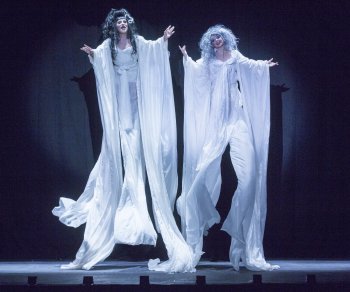 The masks above the stage take over the narration with streaming video as we see a recreation of the playhouse’s opening night of Feb. 12, 1915 with a spectacular production of Alice and Irene’s  own Biblical dance drama, Jepthah’s Daughter (originally with a cast of 70) with Alice in the leading role and including a scene of fire. This is followed by the 1916 staging of Lord Dunsany’s Egyptian epic, The Queen’s Enemies, a show which is moved unsuccessfully to Broadway. Their next show, The Kairn of Kordiwen, a Celtic dance drama, with topless dancing, leads to endless kidding as to the correct pronunciation of its name. An Arab fantasy follows in which the sisters travel abroad and are inspired to stage an Egyptian dance drama including a dancing camel. Next they stage the Sanskrit Indian classic, The Little Clay Cart, 1924, in which they both appear in beautiful saris and try violently to upstage each other. After Arias and Muz appear on stage as themselves to joke with the audience, proof that the theater is haunted occurs. Their last show at the Neighborhood Playhouse and the final sequence is S. Ansky’s Yiddish tragedy, The Dybbuk (1925) with dancing, ghosts, a cemetery, and both sisters appearing opposite each other. The evening ends with Alice and Irene reappearing as flying ghosts to discuss their legacy and promise to always be in their home, this historic theater.

Drag queen Arias and Burlesque queen Muz work well together, making use of their own strengths and comic timing. Arias is always imperious and sarcastic as Alice, while Muz tends to be uncertain and needy as Irene. Arias grand dames it in all of the recreated shows, while Muz gets to create exotic dancing for these stage shows that cover theatrical styles from around the globe. Tall, hunky Jonothon Lyons plays all of the male leads in each of the recreations, suggesting a very hammy actor chosen by the Lewisohns for his looks and physique. The rest of the superb cast is made up of puppeteers Kate Brehm, Lute Breuer, Chris De Ville, John Dyer, Ben Elling, Kate Melby, David Ojala, Jessica Scott, Rachael Shane and Ashley Winkfield who make the stage seem filled with more people than it actually is. 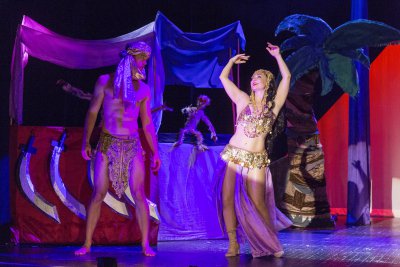 While the sisters produced very popular parodies and musical revues which they called The Grand Street Follies, Sisters’ Follies: Between Two Worlds is in this satiric vein and is often a hoot. Created and directed by Twist, with text by Twist, Muz and Arias, Sisters’ Follies has been given an eye-filling, witty, elaborate production. The costume design by Machine Dazzle for the many exotic locales and settings are simply too numerous to describe but each scene seems to be done in a different color. The projection design which includes the talking masks as well as scenic elements is by Daniel Brodie and Gabriel Aronson. Muz is responsible for the choreography while Wayne Barker is credited with the original music and music direction. The lighting which helps recreate all these shows from the past as well as the hauntings is the work of Ayumu Poe Saegusa. Janet Clancy is credited as flying director. Legendary fight director Rick Sordelet worked as movement consultant.

Sisters’ Follies: Between Two Worlds is the latest creation from that genius Basil Twist. Unlike his other shows, this one is an historical pageant paying tribute to the real life Lewisohn sisters. At one and the same time a satire and an extravaganza, Sisters’ Follies is vastly entertaining and visually dazzling as well as recreating an era in New York theater that has been unjustly forgotten.