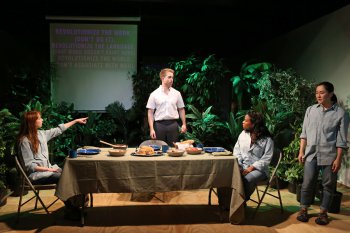 The women in Alice Birch’s London hit, Revolt. She Said. Revolt Again., are angry. They are angry about how they are treated by men and social norms, they are angry about gender inequality, and they are most angry about how the English language is inadequate for communication. Acted in six short upbeat scenes by a cast of four, three women and one man, Lileana Blain-Cruz’s production for the Soho Rep. is sharp, direct and in your face. It resembles nothing so much as the Abdurdist one acts of the 1960’s when the content would have been about angry young men in bizarre situations.

The scenes are performed on set designer Adam Rigg’s raised wooden platform backed by potted plants with minimal props (folding chairs, a table, when needed). Titles are projected on screens on which titles define the sections with commands for women: Revolutionize the Language. (Invert It); Revolutionize the World. (Do Not Marry); Revolutionize the Work. (Engage with it); Revolutionize the Body (Stop Eating), etc. The mercurial and highly energized cast made up of Daniel Abeles, Molly Bernard, Eboni Booth and Jennifer Ikeda changes characters on a dime, and Blain-Cruz’s fast-paced staging keeps one scene quickly seguing into another.

Some of the scenes are hilarious, others shocking, others scattershot. A man attempts to woo a woman by describing what he wants to do to her body. However, she objects to his sexist language which he doesn’t even notice. He wants to “make love to her,” she suggests “with her.” He wants her to spread her legs, she wants him to spread his first. Ultimately language breaks down. Another woman rejects a man’s marriage proposal telling him that he essentially said he wanted to reduce his income tax, and make her become his property, a thing he owns. A woman asks her boss for Mondays off to sleep more and is asked if the problem is that she is pregnant. Two supermarket managers have to deal with a woman who lay down in Aisle Seven and threw her dress over her head as her form of protest. 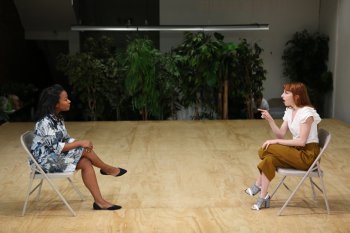 While many of the scenes are right on target, others seem too metaphoric and anarchic to make much impression, while others take on too many targets to make their point. The best ones deal with our long-held accepted beliefs both of our ways of speaking and our societal conventions. In its American premiere, Revolt. She Said. Revolt Again. is challenging theater which doesn’t always land where it wants. However, Alice Birch is definitely a unique new voice in the theater and someone to watch closely in the future.