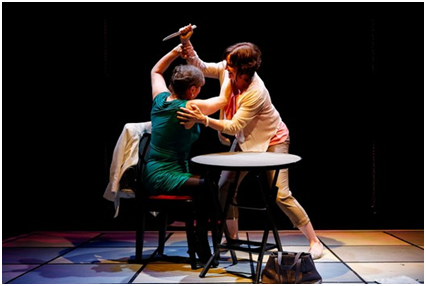 TBTB, the catchy acronym repurposed as Theater Breaking Through Barriers, still carries in small print above the legend, the old usage: Theater By The Blind, still led by the same, witty, clever people as it has been with hearts in the right place, now having expanded their purview for other would-be actors regardless of anatomical anomalies. And there’s the rub. These bright, caring people have for years put on plays cast with actors who are not actors first and foremost, knowing that everything, ultimately, depends on the performance, no matter how good the intentions paving the way. They have decided long ago that audiences which come to see their productions come to see how well performers can perform despite handicapping conditions. And the question remains: at what point is the usual exploitation of actor and playwright and director turned on its head and become secondary to exploitation of decent compassion? Which comes first?

Don’t ask TBTB. They have their answer. Wonderful people have worked with them through the years to prove their thesis to us all. And this time around they have commissioned five short plays by five of today’s twinkling names, John Guare, Neil LaBute, David Henry Hwang, Beckah Brunstetter and Bruce Graham as their showcase on Theatre Row. Geoffrey Bryant has designed a handsome and imposing framework for them. They have never flown higher. Does this mean that they are ready to compete in the marketplace for the attention of the broad, regular audience? They hope it does. They’re pitching with this program entitled Power Plays, and all that implies. 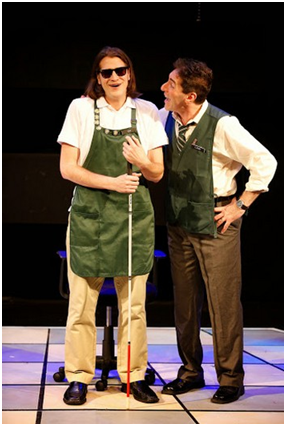 The obvious initial reaction without taking into context their mission is that the plays deal with or lend power in some way, together or separately to the characters, to the audience. That is, of course, the primary goal, usually. Not, however, in this case. The power suggested by the group title is the empowerment of the performers with handicapping conditions. It is a continuation of their original mission. But – as in the past – the company continues to dodge the basic basic: are the actors actors? If they are, regardless of their disabilities, everything works. If they are not, there is an almost impossible burden on the plays to fulfill their purpose with is to entertain and inform, even if the plays are constructed to empower the people who commissioned them.

In most cases, the plays are simply lending the reflected glory of their playwrights’ names. Only one deals directly with a handicapping condition and that is the most successful of them, Bruce Graham’s The Happy F&*#@!g Blind Guy directed by Russell Treyz. The manager of a grocery store can’t stand that his best, happiest employee is blind. He’s ready to fire him. Their confrontation is amusing and instructive. In spite of the fact that neither actor is very good, the situation is strong enough to sustain genuine empathy, instead of the demanded tolerance the other plays place on the audience because all the actors are not actors at all.

Murder by Bekah Brunstetter throttles its own success by its staging. Both actors, Pamela Sabaugh and Anita Hollander, are actors, know what they’re doing as they perform a tête-à-tête between a young, newly successful writer and her older friend who has written for many years and never achieved any comparable success. The fun is their hidden murderous impulses toward each other which playwright and director call on them to reveal and which their subconscious states enact. Everything is fine until Hollander reveals in their fights that she has only one leg and the focus goes out the window, when her disability needn’t have been ignored, could have easily been incorporated into the play.
The LaBute play, I Dare You, in which a young girl seduces an older woman who is wheelchair bound, needs superb acting and direction and might work.
The Guare play, Between, in which two women hash over their lives, ditto.
The Hwang play, Underground, in which people with disabilities are trapped underground in the subway station, ditto.