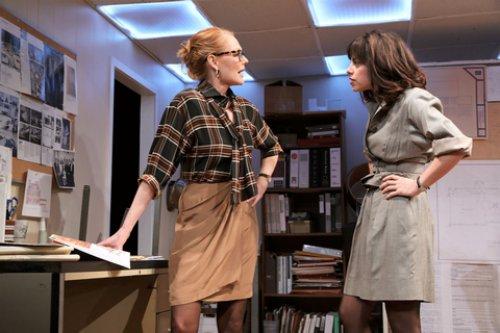 Marge Helgenberger and Krysta Rodriguez in a scene from Theresa Rebeck’s “What We’re Up Against” (Photo credit: Joan Marcus)

With What We’re Up Against,Theresa Rebeck looks back a quarter century to a time when gender inequality in the workplace was a real problem. Oh, wait…yep, unfortunately, if Rebeck’s script didn’t tell us the year was 1992, it would be pretty easy to believe she was writing about the present, especially given the recent avalanche of news concerning sexual harassment and assault in the entertainment industry. The story Rebeck tells never sinks to this horrific level, though it’s possible to imagine that it could have, if she had wanted to follow the male anger she portrays to a place it often leads.

But Rebeck’s intentions, while serious, are not that serious. Set in an architectural firm, her play is populated by an assortment of low-rent Mad Men, who express their retrograde opinions about women in drab offices and ill-fitting clothes. Swilling scotch, they feel like victims rather than victimizers, forced to hide their true thoughts because of an abiding fear that one of their female colleagues will entrap them in a discrimination lawsuit.

The current target of their insecure ire is Eliza (Krysta Rodriguez), a not-that-recently hired young architect who has riled the boys’ club with her frequent demands to, you know, actually work. The office’s alcoholic middle manager Stu (Damian Young) refuses to grant this simple request, because, as he bitterly confides to Ben (Jim Parrack), a subordinate/workplace drinking buddy, he believes Eliza has broken the office’s secret protocol, which seems to only apply to women and involve complete obeisance to him. 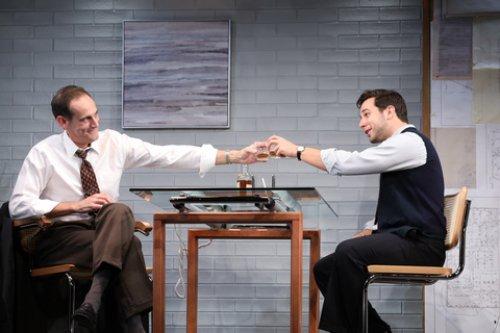 Damian Young and Skylar Astin in a scene from Theresa Rebeck’s “What We’re Up Against” (Photo credit: Joan Marcus)

Needless to say, Eliza is not happy about this situation. And, with Gen-X resolve, she doesn’t just accept it, either, tricking Stu into exposing his misogyny by presenting her design for a building project to him under the name of a male architect, who also happens to be the office nincompoop (Skylar Astin). When Stu praises the design’s innovative solution for a tricky duct problem, Eliza reveals her gambit, which, of course, only further enrages Stu and, consequently, marginalizes her even more.

It’s a solid setup, which leads to a mildly satisfying comeuppance. But nothing about Rebeck’s play is particularly surprising or, more importantly, challenging, unless, I suppose, you happen to share Stu’s mindset. And, if you do, you’re probably not hanging out at the Women’s Project Theater.

Admittedly, Rebeck muddies the waters somewhat through the character of Janice (Marg Helgenberger), the only other female architect in the office. During her six years at the firm, Janice has proven herself to be what Stu considers a “team player,” and so he has let her carve out a decidedly unequal role for herself. That the indignant Eliza considers Janice an ally means that something has to give. And, when it eventually does, the result is the beginning of a difficult conversation between Eliza and Janice about why women often can only advance in their careers by undermining each other. But, then, the lights go down, and the play is over. It’s a shame, because it didn’t feel like Eliza and Janice were done talking. 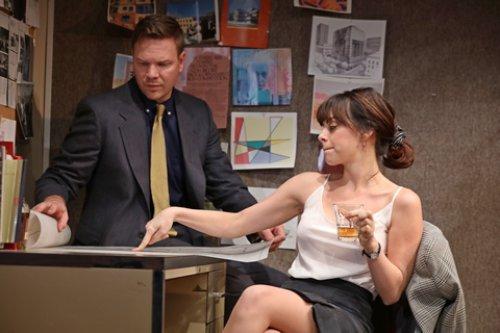 Jim Parrack and Krysta Rodriquez in a scene from Theresa Rebeck’s “What We’re Up Against” (Photo credit: Joan Marcus)

Director Adrienne Campbell-Holt keeps everything moving as facilely as the script demands. She also makes particularly good use of Narelle Sissons’ bi-level set, cramming Stu’s office into a raised cubbyhole that highlights the he-man-women-haters nature of Stu’s whiny invective, which he pathetically delivers in an off-the-rack suit. Costume designer Tilly Grimes smartly refrains from dressing anyone too sharply in an office where the big commissions are shopping malls rather than skyscrapers.

As for the acting, it’s fine across the board, though until the last scene between Eliza and Janice, which Rodriguez and Helgenberger handle well, there isn’t much nuance for the actors to portray. Stu is bad; Eliza is angry; Ben just wants to work. The cast constantly seems like they’re trying to delve deeper, but Rebeck’s words rarely lets them.

What We’re Up Against (extended through December 3, 2017)