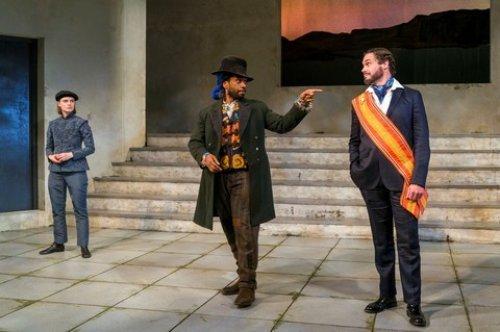 There isn’t much point to doing another revival of a Shakespeare play if you don’t have a new approach to the well-known text. British director Maria Aitken working with both The Acting Company alums and members of Delaware’s Resident Ensemble Players has much to add in her production of the ever-popular Twelfth Night at Brooklyn’s Polonsky Shakespeare Center. A specialist in drawing room comedy (Oscar Wilde, Noel Coward, Alan Ayckbourn) and an actress herself, Aitken has placed the emphasis on sophisticated rather than comedy. Though there is still slapstick and low comedy, there aren’t many laughs though the production sparkles.  A dark comedy where tragedy lurks around every corner, this Twelfth Night begins in a chilly fashion, and when it becomes obvious that all will be well, it turns sunny and charming.

Lee Savage has designed an attractive white Mediterranean villa and tile courtyard  with a view of the sea and coast that suggests it has been inspired by early Corbusier. With all the men in vests and the women in ankle length dresses in Candice Donnelly’s attractive costuming, this Twelfth Night is set some time in the early 20th century. This story of the search for love and fulfillment moves with mistaken identity as its driving force. Shipwrecked in the country of Illyria, twin Viola believes her brother Sebastian to be drowned. Not knowing anyone and not wishing to be a traveling woman alone, with the help of the jester Feste who finds her, she dresses as a man, takes the name of “Cesario” and is employed by the Duke Orsino as a page. 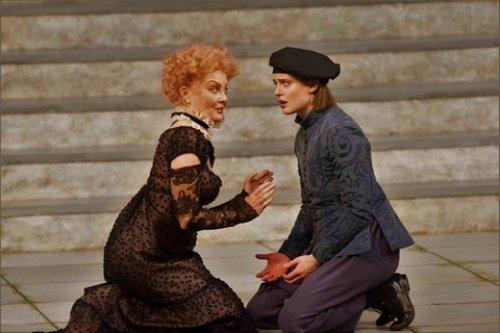 Although he sends her to woo his love, the Countess Olivia, he is strangely attracted to “him.” Olivia, in mourning for both the deaths of her father and brother within the year, has sworn off wooing and has refused any and all of the Duke’s missives. However, when she sees Cesario she is immediately smitten with him, and meltingly and amusingly drops her mourning weeds, creating a difficult love triangle.  Duke Orsino’s attraction to Cesario is also clearly represented in their interactions, with his confusion at his unexpected affinity for a seemingly male person. All eventually turns out well when Viola’s brother Sebastian turns up in the nick of time (dressed in identical clothing) leading up to two happy weddings.

In the play’s subplot, the Countess has two inappropriate suitors: the country fop Sir Andrew Aguecheek who is sorely tried by her uncle, the profligate Sir Toby Belch, and her pompous steward Malvolio who is convinced by a faked letter from Olivia (written by her servant Maria under Sir Toby’s guidance) that she is in love with him. Both of these plots turn dark with a near duel and near madness but tragedy is avoided by the end, though the gulled characters do not get much in the way of reparations. In this production, Aitken has built up the role of Feste, Olivia’s jester, who not only sings, plays the guitar and tells jokes, but also plays master of ceremonies, both beginning and ending the tale. 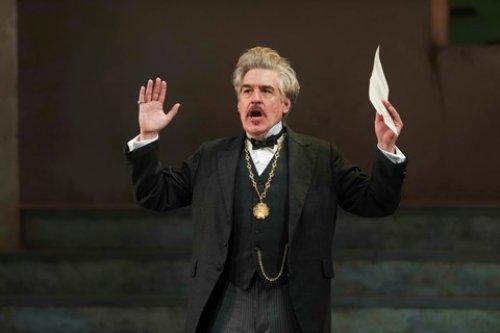 Played as older than either Viola or Sebastian, Elizabeth Heflin is charmingly eccentric as the strong cougar who becomes lovesick and yielding at the sight of Cesario and then Sebastian. In the role of the melancholy Duke Orsino who is often played as dull and sluggish, tall handsome Matthew Greer is both dashing and athletic, seen both coming from hunting and athletics. Surprisingly Susanna Stahlmann as Viola/Cesario is very bland and colorless, but this may be intentional: it allows the other characters to read into her/him what they wish. As her twin brother Sebastian made up to look like her mirror image, John Skelley is both avid and keen, willing to go along with a seeming jest though he does not know where it will take him.

In the secondary story, Stephen Pelinski has a more modern take on the sorely tried Malvolio. Rather than the usual Puritan, he is played  as a pompous, pretentious functionary who has ambitions above his station, he is a memorably original character. Michael Gotch as the doltish Sir Andrew is not so much a simpleton as a country bumpkin easily manipulated through lack of knowledge of city ways. Dressed in the height of trendy fashion, he is one who hopes to get ahead through ostentation and show, while Malvolio hopes to advance through being obliging and cheerful to Olivia who couldn’t care less. Kate Forbes (the best known performer in the cast with a string of New York credits) is a feisty, take-charge Maria, while Lee E. Ernst’s Sir Toby is less the usual drunkard than the practical joker.  Joshua David Robinson as the jester Feste is delightfully acerbic and mischievous, much like Puck in A Midsummer Night’s Dream. As Antonio, the virile sea captain who has long been a friend of Sebastian, Hassan El-Amin adds yet another wrinkle to the mysterious ways of love, enamored of his friend who does not return his feelings. 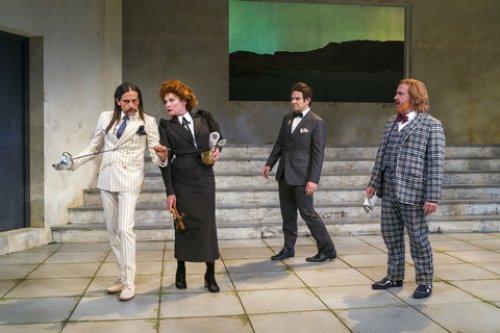 On the plus side the diction is crystal clear and every word and line is understandable, making this a terrific choice for those who do not know the play. On the negative, the large picture window on the upper terrace fronting the sea and the coast does not change much in the course of the play and eventually the static  view becomes kind of monotonous. Possibly Philip S. Rosenberg’s slow but colorful lighting plot needed to be sped up to make the view change more often. While this Twelfth Night takes some time to fall under its spell, it is ultimately delightfully warm and knowing about the difficult ways of the heart. Its inventive changes cleverly update the play to a time period within our knowledge.

The Acting Company, in a co-production with Resident Ensemble Players