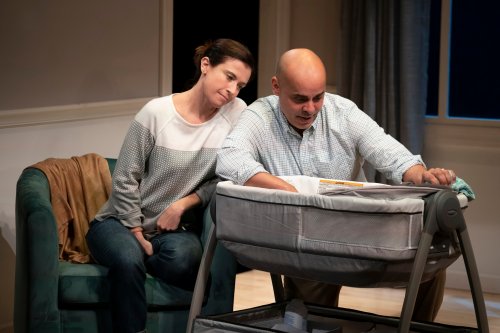 Adventurous playwright Will Eno has always pushed the envelope. In Tom Pain (based on nothing), Middletown, The Realistic Jones, The Open House and Wakey Wakey, he has challenged viewers in always new and unusual ways.

In his latest play The Underlying Chris presented by Second Stage Theater and directed superbly by Kenny Leon, he has done it once again. This time ten actors and actresses play the title character from birth to death. However, the identity of Chris keeps changing in each scene: male/female, young/old, white/black/hispanic. One way to approach this play is as an Everyman/Everywoman comedy drama depicting all of the events that occur in a person’s life. 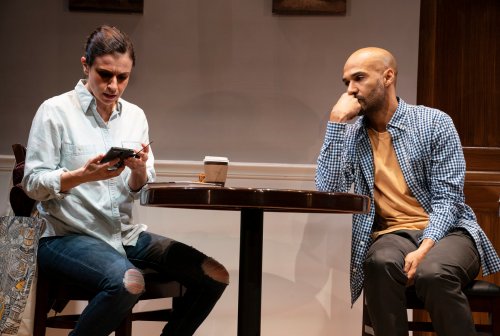 Another way to look at the play is as the twelve stages of man and woman, going Shakespeare five more steps. Unlike Tracy Letts’ Mary Page Marlowe, in which the heroine was played by a different actress at each stage of her life, here we are asked to adjust to multiple versions of Chris whose name changes in each of the play’s 12 scenes: Chris, Christine, Kris, Christopher, Kristin, Topher, Christoph, Kit, Christina, and finally Khris.

Lest you wonder how we should be prepared for this state of affairs, an actress in a “Prologue” advises us that “the subject is life on Earth.” “Identity? Change, maybe. Continuality, if that’s a word. Newness and renewal. … It’s a story about the moments that shape a life, and the people who shape a moment. And the things we don’t have names for. The essence, I guess, the spirit. And also, mystery. And, meaning.” In the opening scene, we hear but don’t see Chris in a bassinet who is referred to alternately as both “he” and “she” by his mother. However, in each scene our protagonist has back trouble, is very athletic and had a difficult childhood losing both mother and father early in life.

In the second scene, we meet Chris aged ten at home with his nanny awaiting his single parent, his mother. At age 12-14 Christine is in the hospital after a swimming accident. Dr. Rivington tells her prophetically that “it all comes together in the end.” At age 21, Kris, a female is being interviewed on a radio talk show as tennis champion, a model student and a survivor. Next we meet Christopher, aged 27, a med-student doing post-graduate work. However, in Scene 6 we find that Kristin now in her 40’s with a husband and daughter Joan didn’t like medicine and has become a therapist. In his 50’s, Topher is acting in a small community theater production, separated from his wife, awaiting a message that his daughter Joan has had her first child.

Scene 8 become rather surreal as we meet Krista in her 60’s with her grandson Philip as well as Christoph, in his 70’s, with his daughter Joan. Kit, aged 70’s, is found at the Department of Motor Vehicles with his daughter Joan attempting to renew his driver’s license, only to fail his eye test and be rejected for renewal. At 82, Christine is in an assisted living facility celebrating her birthday with granddaughter Lisa and great grandson Christopher who is unseen in a baby carriage. Finally, Kris in his late 80’s, now blind, is awaiting a referral for physical therapy. Rounding out the play is the funeral for this peripatetic character who has lived a very full life. 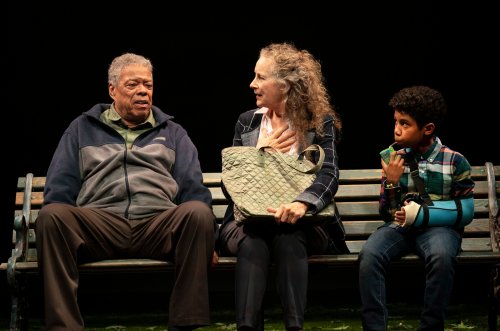 The hard working cast made up of Isabella Russo, Hannah Cabell, Nidra Sous La Terre, Howard Overshown, Lenne Klingaman, Nicholas Hutchinson, Lizbeth MacKay, Michael Countryman, Luis Vega, Denise Burse and Charles Turner play different characters in each of the play’s 12 scenes. Each one has a chance to shine in one or more of the sequences. They beautifully turn into other people as though the play is made up of different one acts.

In each scene the title character is somewhat older than before, traveling through each decade of life, from a few months old to death at 90. Dede Ayite’s costumes help immeasurably to let us know what age “Chris” is in each scene. The 12 evocative sets are swiftly changed for each sequence in Arnulfo Maldonado’s clever design while Amith Chandrashaker’s subtle lighting helps bring each to life.

Will Eno’s The Underlying Chris is challenging to put the pieces together and consequently not for everyone. However, under Kenny Leon’s tight direction, the play is provocative and stimulating, asking more questions than it answers. Its riddles will fascinate some theatergoers, infuriate others.