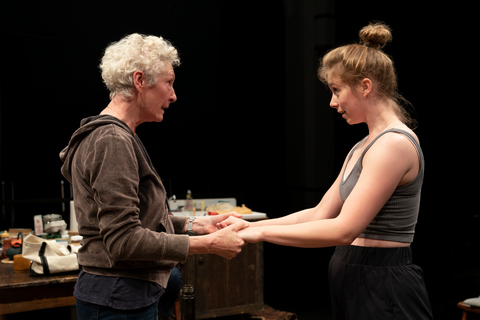 Brenda Wehle and Charlotte Bydwell in a scene from Richard Nelson’s “The Michaels” at The Public Theater (Photo credit: Joan Marcus)

Richard Nelson’s latest play, The Michaels (subtitled a “Conversation During Difficult Times”) is a thing of beauty. Low-key like his Apple Family quartet and his The Gabriels trilogy, it is Chekhovian in the best sense of the word: very little happens but life passes by. The characters who sit in a Rhinebeck, New York,  kitchen (also the setting for the other seven plays) talk of life and death, love and desire, memories and accomplishments. They reveal secrets and ponder changes and ultimately make decisions. Not much takes place but then again all of life occurs in the course of the play’s two hours.

Directed by the playwright, the cast of seven arranges the kitchen set as the play begins, furniture, chairs, food, plates, memorabilia. Two of the cast (Maryann Plunkett and Jay O. Sanders who just happen to be married to each other) have appeared in the other seven Rhinebeck Panorama plays as they are now being called but the rest of the cast could not be better and are also totally in tune with Nelson’s elegiac mood and story. While this play is not political in the way the other seven were, moments of social and political commentary creep into the conversations: Sally will have to give up her dance studio because of a rent increase, David has seen a parody of Donald Trump in a Parisian stage play, a theater tour had to be canceled because one actor was denied a visa.

It is the evening of Sunday, October 27, 2019 (the night the play opened) from 6 – 9 PM, performed almost in real time. A tribute is being prepared for semi-retired modern dance choreographer Rose Michael (Brenda Wehle). Her family and friends have gathered in the kitchen in an old farmhouse just outside of town where she lives: Kate, Rose’s partner of two months, a retired high school teacher from Rhinebeck, who is domestic and does the cooking; Rose’s ex-husband David (Sanders), an arts manager and producer, and his second wife Sally (Rita Wolf), a former dancer in Rose’s company who live nearby; Lucy (Charlotte Bydwell), David and Rose’s 31-year-old daughter who is a dancer and a choreographer; her younger cousin May (Matilda Sakamoto), also a dancer now living in Brooklyn, daughter of Rose’s sister. Arriving for a visit is Irenie (Haviland Morris), a former dancer in Rose’s company who is now an administrator at Gibney Dance Studios in Manhattan where May takes classes. 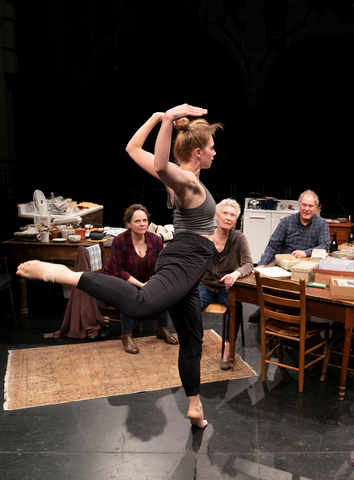 While Kate cooks a complete dinner, the talk swirls around her. On everyone’s mind is that Rose has terminal cancer and that the others are working on the tribute. Lucy and May demonstrate Rose’s solos that they will perform at the tribute as well as a duet they perform together, based on original choreography by Dan Wagoner, recreated by dance coach Sara Rudner and choreography consultant Gwyneth Jones. The older guests tell anecdotes of their shared past and look at old photographs and speak of people gone or who are not there. Rose’s dances are famous for adapting women’s work for the stage. Revelations are made: Rose is dying, Lucy may turn down her fellowship to study in France which would lead to a performance in an international festival, Kate has received an offer to move to France. Finally Rose’s notebook is read out loud in which she has written what she wants for her funeral: some singing, some dances, some stories, some food, much like what we have just witnessed.

The play’s theme appears to be the life well lived as well as the ephemeral nature of art. As the younger women try to recapture Rose’s dances not seen in 30 years, we realize that art is not permanent, but transient. The Michaels also deals with  approaching the last stage of one’s life with grace. As Rose  evaluates her life, she also moves into a new stage, taking stock  of her career and teaching the next generation her art and skills. The conversational tone used in the other seven Rhinebeck Panorama plays is in evidence here by which is meant that the actors speak in normal voices, not stage or theatrical strength. It does mean that one has to strain to hear but this gives the play a verisimilitude that is quite unusual. 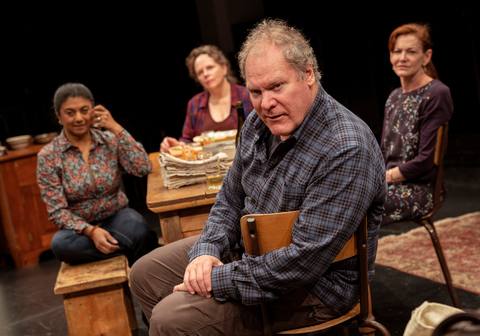 Under Nelson’s direction, the cast is a true ensemble behaving like they have known each other for years. Wehle as the matriarch Rose Michael is indomitable in her life and career until she is doubled over by a stab of pain. Both fine modern dancers, Bydwell and Sakamoto as Lucy and May, respectively, exhibit the curiosity of the young about things that interest them. As Rose’s new partner in life, Plunkett is both compassionate and understanding, low-key but a tower of strength. As other family members, Sanders (David) and Wolf (Sally) are a kind of Greek chorus giving able support. Morris as the visitor Irenie, a long-time friend, operates as the questioner who precipitates memories and revelations.

Jason Ardizzone-West who designed the sets for Nelson’s three Gabriel plays does pretty much the same thing here, creating a well-used working farmhouse kitchen around which the audience sits on all four sides. Co-costume designers Susan Hilferty (The Apple Family Plays, The Gabriels) and Mark Koss (Nelson’s Uncle Vanya) have created a collection of clothing that are so much the characters that they look like they could have come from the actors’ own wardrobes. The subtle lighting with sudden blackouts to denote the passage of small amounts of time is the work of Jennifer Tipton, famed for lighting of dance. Scott Lehrer’s sound design is most noticeable for the dinner bell which is struck occasionally offstage to scare away the deer in the driveway.

Richard Nelson’s The Michaels is a beautifully wise play about remembering one’s accomplishments, passing on the torch, and entering the last stage of one’s life with grace. It is not a play for everyone as its demands are great: its slow, conversational tone suggests that not much is going on. However, in the course of the play’s two hours, we get to know its people and their time thoroughly. The talk is excellent and the emotions run deep. And there are those three dances recreated by the younger members of the cast for diversion.

The Michaels (extended through December 1, 2019)

Running time: two hours and ten minutes with no intermission