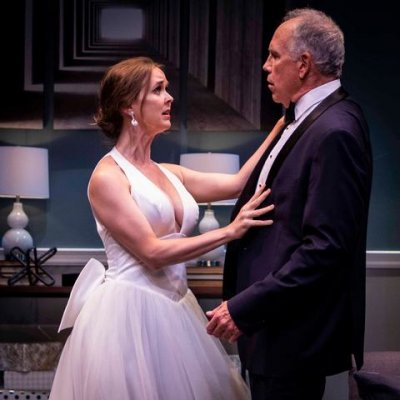 Alison Preece as Victoria and Tim Hayes as Richard in a scene from Lenore Skomal’s “The Exes” (Photo credit: Emily Hewitt)

Lenore Skomal’s The Exes wants to revive the Broadway-style sex comedies of the 1950’s and 60’s, earlier called boulevard comedy. Unfortunately, not only is the formula passé but television sit-com now does it better. The play is also too heavily plotted with two main characters with the same name and a great many petulant, entitled people. Worse still, the play fails to deliver any witty or clever lines, instead giving us quotes and references from much better works without much point. Directed by Magda S. Nyiri, The Exes has at least two false endings before it comes to an unearned conclusion.

To sort out the confused plot, Dick and Mavis Wright were previously married, living in Methuen, Massachusetts, with a son Garrett, before Mavis traded up for millionaire venture capitalist Richard Killingworth. He was at that time divorced from his first wife and with a spoiled 35-year-old daughter Victoria, treated like a princess. Bored by Richard being married to making money, Mavis has left a year ago on Christmas Eve (in the middle of planning Victoria’s wedding) to move in with her Danish boyfriend Marcel in Copenhagen.

Richard has kept their butler/house manager, an Englishman nicknamed Prim, who Mavis wanted to keep with her. In the year since they have been separated, Richard has not gotten around to signing the divorce papers so that Mavis can marry Marcel, described as a “Danish Don Juan.” Marcel is an unemployed former professor of philosophy and poetry who was terminated for “inappropriate relations with his co-ed students.” They appear to be living on Mavis’ alimony. Got all that?

The play begins on the morning of the following Christmas Eve as Richard, Dick and Garrett are preparing to go to Victoria’s wedding to Digby, when who should show up unannounced but Mavis who must get her divorce papers signed and delivered by 5 PM before City Hall closes. It transpires that her temporary residency in Denmark will expire that day and she can only return if she is married to Marcel. Expecting a favorable outcome, they have booked a midnight flight back to Copenhagen.

She also has an ulterior motive: to get an invitation to Victoria’s wedding, wanting to see her walk down the aisle. (She did plan the wedding initially but now Richard has security to keep out the undesirables, and her invitation did not get lost in mail.) Next, Victoria shows up with a problem: the pre-nup papers her father gave her to have Digby sign months ago were only delivered to his chauffeur this morning and he is refusing to sign them. Richard keeps getting calls and messages from a botanist who he invested in and who wants more money on his patent that has made Richard extremely wealthy to the chagrin of all the florists in America who might still be after him. Both Victoria and Mavis cause all kinds of problems that are eventually sorted out by the final curtain which doesn’t come soon enough. 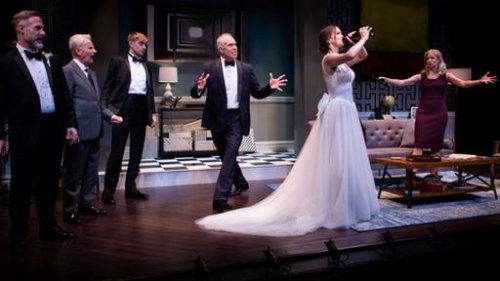 The Exes might have worked if it had clever dialogue but alas, it is very predictable. Richard and Dick call each other Number One and Two which is confusing until it is revealed that they have both been married to the same woman. Using both forms of Richard which is unlikely and difficult to keep straight seems to occur simply be so that in answer to the question, “Does anyone else see the irony that both your exes have the same first name?,” the first husband can say “Actually we don’t. He’s a Richard. And I’m a Dick.” As we never meet peevishly demanding and self-involved Victoria’s fiancé, we never find out what he sees in her. There are no likable characters and no one to root for.

Among the clichés are “A martini, please. Shaken. Not stirred.” Where have we heard that one before? Marcel comes on mincing like Danny Kaye and singing his song, “Wonderful, wonderful Copenhagen,” from the film musical Hans Christian Andersen which seems to be about all the author knows about Denmark except for some untranslated Danish expression. Another not very funny device is for Dick to repeatedly mix up Copenhagen with Amsterdam where they wear wood shoes and smoke reefers. Marcel continually introduces himself to the other characters and invites them to stay in their enormous premises long after it becomes obvious the other characters only want to see him gone.

We never do get the backstories so the characters come off as shallow and one-dimensional. As millionaire Richard Killingworth, Tim Hayes is rather bland and insipid. Though David M. Farrington does well with the drunk act, his Dick becomes tiresome real soon. The entitled Mavis (played by Karen Forte) and Victoria, the apple of her father’s eye (Alison Preece) are too obnoxious to be either comic or clever inventions. As the Killingworth butler who wants to be called house manager, John Coleman Taylor apes all of the stereotypes of the waspish English manservant. Given less stage time, Galen Molk as college-aged son Garrett Wright (now in his fifth year) is believable but not a fully developed character. Playing a role that would have given Danny Kaye pause, Kyle Porter’s impish Marcel Nistlerood palls very quickly.

While Craig Napoliello’s millionaire bachelor pad looks expensive, it has art work and tiled floors which clash with the wallpaper and which no first class interior decorator would have allowed. Napoliello’s restrained costumes are more sedate but then the characters are all in formal wear in either black, white or gray which limits the possible mistakes. The lighting design by Ross Graham never really suggests the shifts in time from 10:30 AM in the morning until after midnight. While director Madga S. Nyiri appears to have a great many more credits than the playwright, she has not been able to rein in the excesses of the tired plot and dialogue.

Divorce is a ripe subject for comedy or satire as has been shown by Jean Kerr’s long running Mary, Mary and David Marguiles’ Pulitzer Prize winning Dinner with Friends. In fiction John Updike’s Maple stories comes to mind. As early as 1904, Edith Wharton realized it was an excellent subject for fun in her short story, “The Other Two.” Unfortunately, Lenore Skomal’s The Exes which takes as its models more accomplished Broadway sex-comedies of the 1950’s and 1960’s does not join their company.